"An unexplained crop circle in Salinas, Calif., has captured the curiosity of alien enthusiasts and conspiracy theorists across the nation."

"The patterns were noticed by aerial photographer Julie Belanger, who told ABC News she was shocked to discover them during a flyover on Monday." 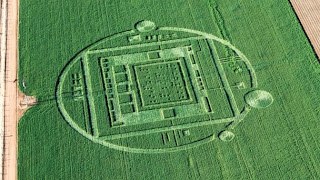 "Adding to the mystery is a video posted on Youtube that shows two friends coming across the patterns after seeing green lights emanate from a field."


ABC News via Drudge tweet
Posted by Lem Ozuna from the Braves at 9:00 PM

I have a theory. Bago and his new gal are making a splash.

Kimmel's probably behind this just like the last viral video.

Maybe it would, I don't know.

Maybe that's a new year resolution I should make. Stop or cut back on the day dreaming.

I had put some angry birds games on the phone and the iPod for the nephews. they misplaced my iPod. so I've been without it for the past month or so.

I've been a walking, talking regular Walter Mitty for most of that span of time.

The question for me is how do I cut back on that?

Most of what I have to do doesn't require much concentration.

So it's easy for me to slip into it.

I ordered the classic iPod memory wooping 160 gig. it will fit everything I have. I got my brother to pay for half of it.

BTW. Amazon doesn't cut me in on my own buys, as an associate. it kind of sucks, if you ask me.

There are ways around that I suppose. I could ask a family member to order stuff for me.

I remember reading that short story, Walter Mitty, in High School. My English was still poor but I did understand it. I could definitely Ident with it.

Walter Mitty is a lovely little story. I would rather eat thumbtacks than watch what Hollywood has done with it.

BTW, a big thanks to those of you using the portal. It's hard for me to talk about it because the substance of it kind of gets in the way of what I want to say. and what I want to say is that while I would like to think it doesn't matter... it does matter if people use it. It does matter that I get to share it with some of the contributors. here. Chip, Hazman, Deborah and Palladian.

Pollo, Synova, Darcy and Pasta as well.
You guys have been unbelievably terrific.

Walter Mitty is a lovely little story. I would rather eat thumbtacks than watch what Hollywood has done with it.

If there was ever a story that is meant to be read... whatever that means... Water Mitty is it.

I don't know that Hollywood can pull it off.

Thanks for reminding me about your Amazon connection Lem. I will try to stop over here before pushing the button next time.