Jorge Ramos: Reporters ‘Cozy with Power,’ Act Like They’re in a Club

“You turn on the TV, and you see very bland interviews. Journalists in the United States are very cozy with power, very close to those in power. They laugh with them. They go to the [White House] correspondents’ dinner with them. They have lunch together. They marry each other. They’re way too close to each other. I think as journalists we have to keep our distance from power.” 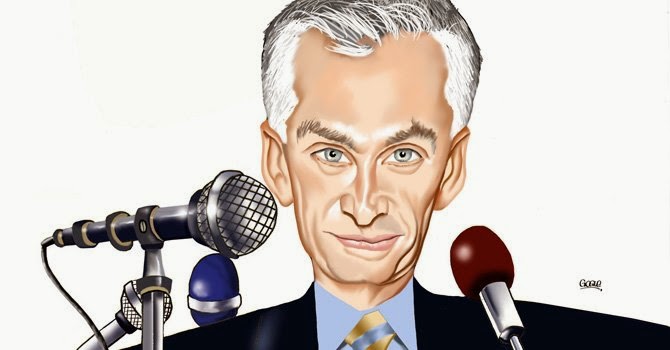 Jorge Ramos Ávalos is a Mexican American journalist and author based in Miami, Florida.
Posted by Lem at 11:00 AM

Maybe we can get some Mexicans to do the job that Americans just don't want to do?

Just wait, Jorge, if Republicans ever gain the power back, it will be a different media that you'll see.

I think the term he is searching for is: incestuous.

"short, thin, blue-eyed and silver-haired, he is often called the “Mexican Anderson Cooper”"

I don't think so.

Is he a Mexican or is he an American?

Is that right, Rabel? If so, that's a lot of stuff to squeeze.

America is imploding economically, last quarter revised to MINUS 1%, because...wait for it...we had a bad winter! Just heard that on CBS "News." The chutzpah of these suckups to the commie in chief is HUGH!

For me, having sex with Jorge's squeeze would be worth the risk of crying afterwards.

Chiquinquirá is stiffening my support for illegal immigration. Or maybe my opposition. I'm finding it hard to think clearly.

It's not only a club, it's a back-scratching money laundering narrative pimping daisy chain.

Jorge Ramos Ávalos must translate to Chris-Craft in English.

And teh thread winner is....

It's not only a club, it's a back-scratching money laundering narrative pimping daisy chain.

And Rabel gets the sustaining sponsor award for the lovely Chiquinquirá. Oh, yeah...

Following up on my theme, and guided by a sense of fairness, here's a little journolist T&A for our friends Ritmo, PHX and ARM. It may also be of interest to Titus, I'm not quite sure how those things work.

The boys have gotten a little quite since the VA dealio.

lol- Ari, Are you kidding me? I stink as a writer. Even though Ritmo is a red herring straw man burning squirrel - he has better prose.

But thanks. Means a lot and made my day.

Even though a majority of Americans understand that amnesty is unfair and that it undermines our immigration laws and will end up killing more jobs for American citizens.

White Hispanic is having trouble fitting in, feeling left out.

The white Hispanic does it better that the guys the girls/ratings go for... or something.

I think his observation is correct when it it comes to Democrats and journalists,and the fact that he doesn't specify Democrats indicates that he's part of the problem......This isn't a new phenomenon, but it does seem to be getting worse.

If he is the Anderson Cooper of Mexico does that mean he likes a taco in his burrito hole?

Hey Rabel, you blinded me with that last one. Not nice!

I saw an ad for this guy's channel and was skeptical about him, but, if he really goes after everybody, good for him.

ricpic, you should see the ones I didn't link. A fish was involved.

How do you say "No shit Sherlock" in Spanish?