"An estimated net 1.2 million Americans of the 35 million Americans identified in 2000 as of “Hispanic, Latino or Spanish origin,” as the census form puts it, changed their race from “some other race” to “white” between the 2000 and 2010 censuses, according to research presented at an annual meeting of the Population Association of America and reported by Pew Research."


The researchers, who have not yet published their findings, compared individual census forms from the 2000 and 2010 censuses. They found that millions of Americans answered the census questions about race and ethnicity differently in 2000 and 2010. The largest shifts were among Americans of Hispanic origin, who are the nation’s fastest growing ethnic group by total numbers. 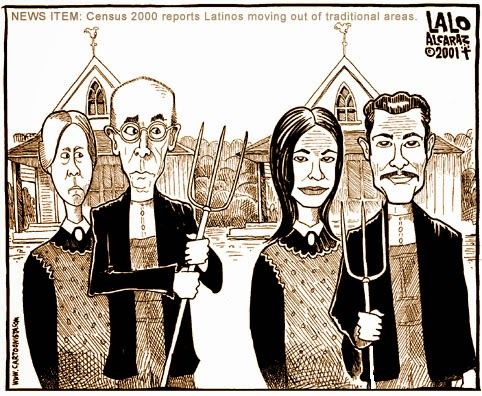 The census form asks two questions about race and ethnicity: one about whether individuals are of Hispanic or Latino origin, and another about race. “Hispanics” do not constitute a race, according to the census, and so 37 percent of Hispanics, presumably dissatisfied with options like “white” or “black,” selected “some other race.”

The researchers found that 2.5 million Americans of Hispanic origin, or approximately 7 percent of the 35 million Americans of Hispanic origin in 2000, changed their race from “some other race” in 2000 to “white” in 2010. An additional 1.3 million people switched in the other direction. A noteworthy but unspecified share of the change came from children who weren’t old enough to fill out a form in 2000, but chose for themselves in 2010. (read more)

QUESTION: So what does that do to the prediction that whites will soon be a minority?

The interwebs, is there anything it doesn't know?

So, despite all the commentary to the contrary, paler skin is still a sign of higher class.

Well, there goes the barrio.

Since as far back as the 30s the lighter-skinned Louisiana Creoles ("high yellas" to racist whites and envious blacks alike) have long practiced this by moving to SoCal and "passa blanc."

QUESTION: So what does that do to the prediction that whites will soon be a minority?

Are we talkin' Donald here?

The true test of whether we will accept them or not, as everyone knows, is their lack of dance rhythm.

All the crime statistics lump hispanics in with whites, the purpose being to close the enormous black white crime gap to merely muy grande.

Brazil is the obverse of the US. In America "one-drop" of black blood traditionally meant one was considered black (and it's making a comeback) while in Brazil (even today) if one is not 100% black one is considered "white" negroid features or no..

We'll see if they turn down their affirmative action quotas.

Brazil is the obverse of the US. In America "one-drop" of black blood traditionally meant one was considered black (and it's making a comeback) while in Brazil (even today) if one is not 100% black one is considered "white" negroid features or no.

I thought the rule here was 1/16 (if not, I will happily stand corrected).

Given there are so many mixes in Brazil, I don't doubt their take, but, given the horrific nature of slavery in Brazil (and, yes, what we had here was a walk in the park by comparison) and the late date it was abolished there, I guess nobody wants to be associated with it.

Are you telling me that Chico wants to be The Man?

In some places, Chico IS the Man.

The 2010 census added this explanation in front of the ethnicity and race questions : "NOTE: Please answer BOTH Question 8 about Hispanic origin and 9 about race. For this census, Hispanic origins are not races."

This change would have completely shuffled the deck on the answers and makes a direct 2000 to 2010 comparison impossible.

The Times did not mention this change therefore their article is mierda.

In fact, non-black Hispanics in 2010 would have had to have disregarded the instruction that Hispanic is not a race and essentially insisted that it was by checking "some other race."

If anything, this is evidence of a failure to assimilate and the opposite of the conclusion reached by the Times. But mostly, it's not anything at all.