I've seen this new collapsing grill featured some four or five places. It is definitely clever and nice looking. 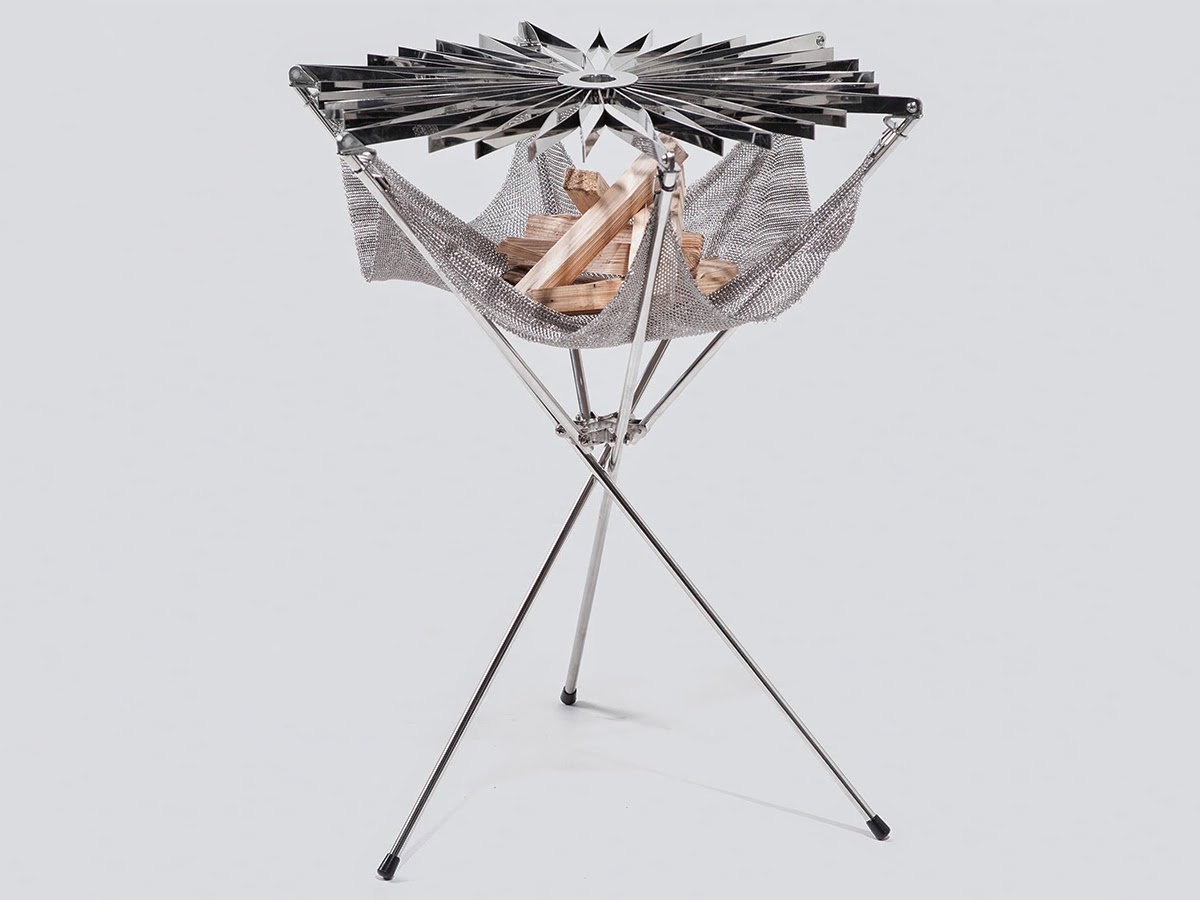 But it is not practical at all for fires or for cooking. Tripod design is inherently unstable. It must have four legs. There is no point in having open fire that high off the ground. Dangerously open to airflow that cannot be controlled. Embers would be flying right out of it and all over the place. It is unsuitable for camping that its collapsing design and light weight implies. Weak unstable legs. Top heavy, you could not flip a hamburger without first stabilizing the entire thing. One dog rushing by and the whole thing is over. This is a disaster, several disasters standing there waiting to happen. Once ignited the thing is on its own to do what it will. It folds like an umbrella and it is not all that portable. Wired. Video

Comments on Wired are worthless. Obviously not campers, however everyone is expert on chain mail.

On the other hand this firebox seems quite sensible for camping. It addresses those camping concerns. And it is reasonably priced besides. 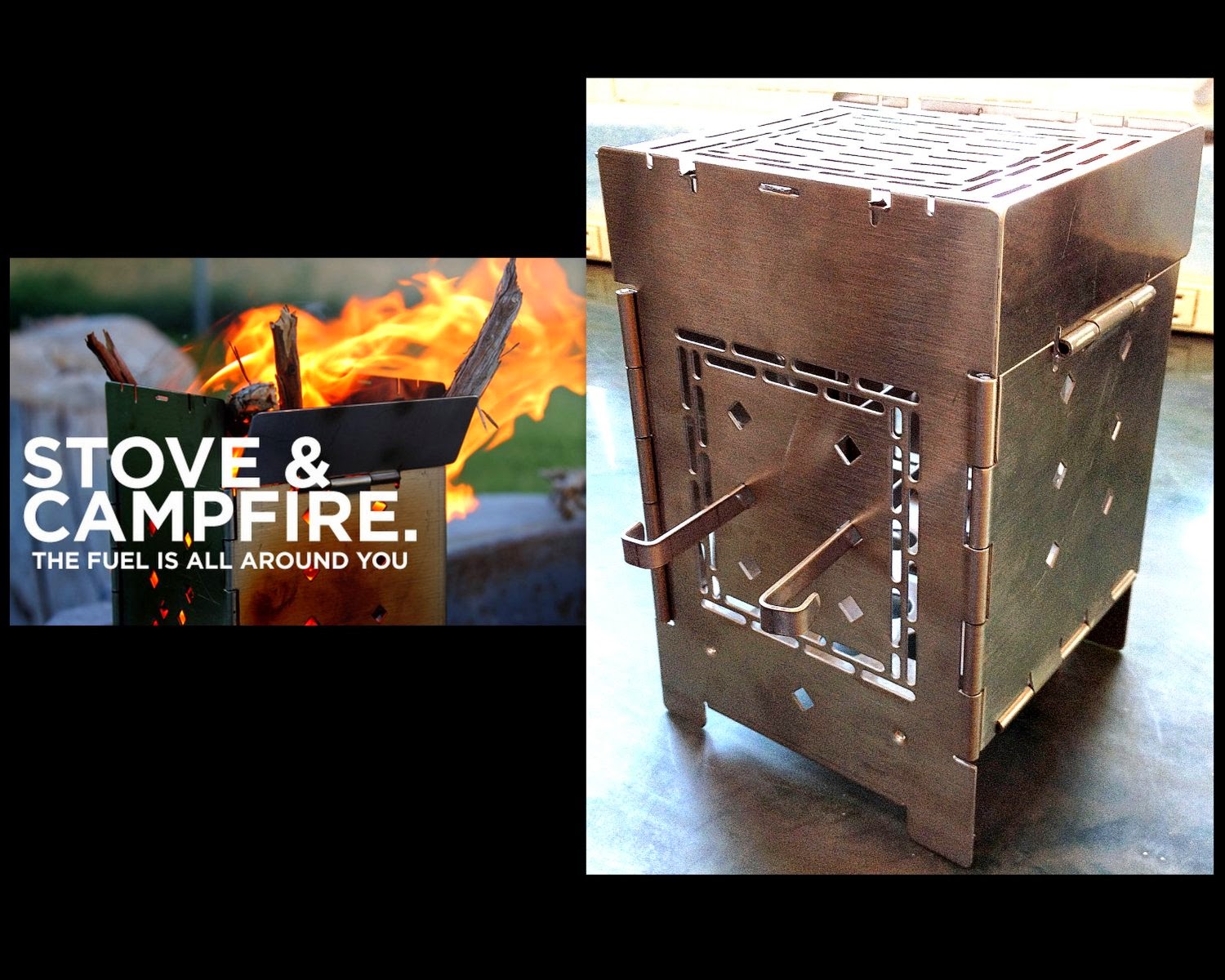 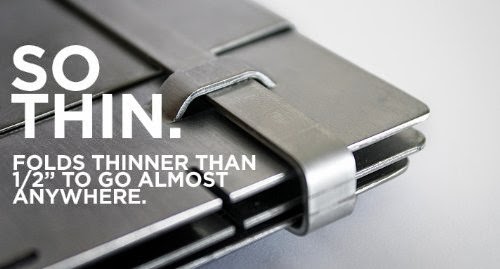 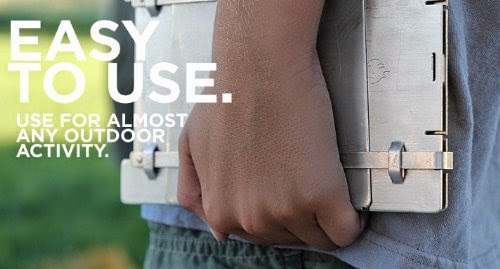 This kayaker is making Bannock indian bread using his camping firebox. He appears to be using a slightly less expensive model.

You can tell by the man's charming accent he is from some foreign country, like France.

[Unrelated to portable grills, the streets in Denver running north and south and lined up parallel immediately west of Broadway are named after indian tribes and arranged alphabetically, so, Broadway, then Acoma, Bannock, Cherokee, Delaware, Elati, Fox, Galapago and so on to Zuni. On the other side of Broadway the streets are named after presidents arranged not so well alphabetically.]
Posted by Chip Ahoy at 12:05 AM

1) Low to the ground
2) As small as possible
3) As light as possible
4) Easy to clean (relatively)
5) Looks are irrelevant.
6) Extra pack mule included to haul frozen steaks, ice-box, and charcoal along with adult beverages.

This one looks small. 5" it looks like to me.

The other ones are even smaller.

The one I linked to has a grill top as well as the sticks, another flat square plate with holes for a an actual grill top.

A smaller size is 3.5" seems too small. But maybe not. I don't know. Hardly the size of a fire starter can.

Another manufacturer states the size in centimeters translates to 4".

He'd be a good guy to go camping. An easy to please type.

Perfect brewing temperature is 170 ℉. Scientific FACT! (#5) And what is so hard about steeping?

He said he didn't understand the science of bread. He's very close to having it right. His experience shows. He does very well. The starch granules release enzymes when wet. The granules swell and begin to unravel on their own by enzymatic action, an organic process, autolysis. It begins to digest itself. 20 minutes or so left alone and the dough is much easier to knead. You can feel the difference in your hands. So starting right off makes it unnecessarily more difficult. Kneading assists the unraveling of molecules bound up. Sticky, the unraveled and stretched molecules adhere to each other creating a matrix that captures air.

Air that expands when the bubbles from baking powder form from the heat. All that needs water.

He said he's using baking powder so no leaven, meaning no yeast, but baking powder is another type of leaven. Activated by heat. The bubbles are trapped and expand. So does the steam from the water inside.

He could sense when it's done by experience. I could tell he could tell by the weight it. That it is still too wet.

Before that, while kneading, he could lift the whole mass out of the bowl and work the whole thing with both hands vigorously as isometric exercise to develop the gluten much faster than pushing it around with a spoon.

Or whip wet dough around ferociously using a lot more muscle until it becomes stringy then add remaining flour and allow it time to absorb and finally knead that in. I would make the dough wetter.

He pinched the edges so it doesn't split, but what is so bad about splitting? That would actually help it cook and expand.

His dough was dry. It would expand more if the dough were more wet. Wet and sticky.

If it were yeast dough, then very wet and very hot oven makes the most open crumb with wide open holes. His bread is closer to a large biscuit with minimal gluten development. But it still works, and still looks delicious .

Then, whole wheat flour is altogether different from white flour. It never develops gluten as well.The husks slice the molecules. Yeast dough from 100% whole wheat is more like a brick. It just doesn't rise very much, but it does better with baking powder. So that's probably the best that can be done.

He said the manufacturer saw him do a review and gave him the firebox/stickbox to review. Pretty nice gift, I'd say, and he did very well. I'm impressed. Come to think of it, this firebox would make a great gift for anyone who likes to go camping.

Before I acquired a butler (Mr Coffee) I had a large coffee pot that I would boil the water, then turn the heat down to medium, add the coffee grounds right on top of the simmering water. Wait a couple of minutes, shut off the heat, then pour a cup of cold water on top and the grounds would go to the bottom and stay there.

Agreed. That top grill with the 3 legs is a out of control wild fire waiting to happen. The compact design is intriguing.

OT: but I will lamely attempt to bridge the gap. uh. Speaking of grilling - filleting - searing -

This is so satisfying, you may need to sit down.

Stick that in your hunter/gatherer and smoke it!

A square metal grid left over from some construction site balanced on some rocks, that we didn't have to take with us of course. That's what we used to take. When we didn't already have a Coleman camp stove.

Re: coffee. Allen's method. That's how people made coffee for eons. Plus, even the very worst coffee tastes spectacular when you are camping.

We don't go rough camping anymore. Too old. So... I bought a 1975(ish) camp trailer last winter. Also got one of these for outdoor cooking. Charbroil portable charcoal grill Haven't used it yet.

Nowadays, we are such big pussies that we are going to do a 'dry run' of camping on our property first, to make sure that everything works and that we have the proper amount of blankets, chairs and stuff, before we go on a longer trip.

I sure hope the company that makes the Firebox is called Mogrilla.

No, but it is one of her medical conditions.

Comments spot on: Didn't we learn from War of the Worlds? Three legged things suck.

Lindsay Lohan safe word is "Firebox" when she is doing shots of Fireball.