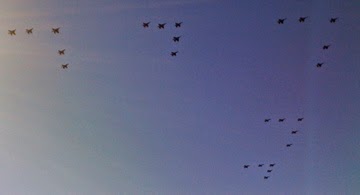 Posted by chickelit at 7:39 PM

No cool military aircraft flyover in B-town this year. Why? Sequester. The idea that originated with Obama, & is all well and good by the dems who run Coloradie.

We can waste all sorts of money at State Dept, ObamaCare, Obamacare website, shovel ready and green energy boondoggles - but no cool fly-over on Memorial Day for you.

The democrat party is like a mudslide in the soul.

There's a Birdie in your heart.

kaleidoscope (n.)
1817, literally "observer of beautiful forms," coined by its inventor, Scottish scientist David Brewster (1781-1868), from Greek kalos "beautiful" (see Callisto) + eidos "shape" (see -oid) + -scope, on model of telescope, etc. They sold by the thousands in the few years after their invention, but Brewster failed to secure a patent. link

The human kaleidoscope is a nice touch and idea for a music vid. Standing on stage jamming on instruments is only so entertaining.

bummer about the patent.

Found it! A post from Althouse by poster Michael McNeil:

"My whole family nearly died at Yellowstone, when my parents and I (just shy of 10 years old) drove down there from Great Falls, Montana, to holiday in the park. Unfortunately or fortunately we'd rented a small camping trailer and it turned out to be too much of a load for our little Nash Rambler car which overheated, leaving us 100 miles away from the park at Three Forks, rather than in the campground just west of West Yellowstone that we had intended to stay at. That night, sometime after 11 PM, the magnitude 7.x 1959 Yellowstone earthquake occurred, and 80,000,000 tons of rock fell on that campground. With us not present 28 people were killed who still lie entombed below that rockfall, which dammed the Madison River and created a substantial lake, known as Quake Lake, that one can still drive by and see. A hundred miles away I slept through it; my parents thought a bear was shaking the trailer...."