Farage is a charismatic speaker, as most any video of him speaking about against the European Union shows.  Here's one of my favorites:


If you're the sort who's cheered by the likes of Farage, relish the moment. If instead you're alarmed by his ilk, take note that the Dutch express similar politics, as do the French. In my opinion, it's a big dynamic equilibrium: push on one side, see an effect on the other side. And the balance shifts when things heat up. Here's a parting thought: 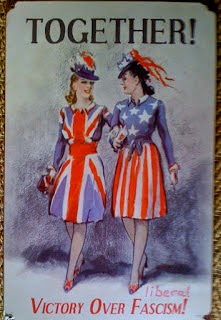 The Euros are getting sick of the decay - and the multi-culti kowtowing to the Moslems.

'Twould be nice to see more of it here.

I love the straight forward calling out of adversaries without resorting to calling anyone a racist. How do they do that?

The English should just leave the EU and focus on their true calling, butlers and bankers to petrosheiks and Russian oligarchs.

The Scots want to stay in the EU.

Understand that the unease that the European man-in-the-street feels over immigration isn't just about illegal immigration, or legal immigration from the former colonies of swarthier types, but what really burns his keister is totally legal & uncontrollable by EU law immigration by anyone from any EU country.

The Sooper Geeniuses who designed the EU decided that not only should there be free flow of capital between EU countries, but also free flow of labor, modeled after the USA & its states.

The problem with this approach is that a kid from Alabama moving to California has much more of a common "American" culture (including English) than an Estonian moving to Britain has a common EU culture. European countries just don't assimilate immigrants quite as well as the US, Canada, Argentina, etc. do. For the EU poobahs to think they could set up a system that depended on host countries being okay with massive intra-EU immigration was wishful thinking at best, a recipe for a resurgence of nationalist disaster at worst.

It's not just the cultural disconnect; as the linked NY Times piece says, all those folks from Romania, Bulgaria and Poland "are willing to work for lower salaries."

And the racist allegation about UKIP isn’t dead yet – from today in The Guardian: Ukip councillor under investigation over racist and homophobic comments

The UK should have left years ago. The EU should go back to just being a common market and focus on free-trade between states and stop being a trans-national Empire.

As for the Scots, the English would be well rid of them. They send the most left-wing MP's to Parliament, year after year. And maybe, if Scotland becomes independent, New England will follow their example.