Assisted Suicide: "Our members told us to get active on this subject. It was ripe for a decision,"

The Guardian: Exit added "suicide due to old age" to their statutes at an annual general meeting held over the weekend, allowing people suffering from psychological or physical problems associated with old age the choice to end their life.

Assisted dying is legal in Switzerland and technically even a healthy young person could use such services. However, organisations involved in this work set their own internal requirements, which differ from group to group.

The move has been criticised by the Swiss Medical Association amid fears it will encourage suicide among the elderly. "We do not support the change of statutes by Exit. It gives us cause for concern because it cannot be ruled out that elderly healthy people could come under pressure of taking their own life," said the association's president, Dr Jürg Schlup.  (read more) 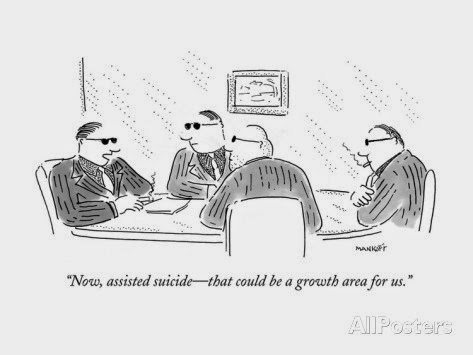 The cartoon is particularly menacing if you think of the financial gain behind relieving pain.

Those are the same dudes who decided to place a tacky souvenir shop at ground zero.

I have mixed feelings about right to die. If you are healthy and you want to die, committing suicide is easy. Gun, rope, knife, bridge, tall building, pills, alcohol, garage/auto combo etc...

If you are unable to move and subsist in a pain filled partially vegetative state, those options are not really available. It seems to me if you want assistance to end it all, at that point, it is far more humane than lingering in pain, waiting to die.
Christian religious doctrine is very much against any form of suicide so this is a moral problem for some.
Is it a slippery slope in Switzerland? We shall see. Will healthy elderly line up to die? I doubt it. But who knows.

I don't think Islam, Judaism, Buddhism, or Hinduism approve of suicide either. This is more a believer versus secularist thing.

My exit strategy has long been to blow my brains out in a dumpster just as the truck is tipping it in.

Assisted suicide for terminal illness, painful unrelieved existences, semi vegetative states.....yes. If I am in a terminal state, as was my Aunt with inoperable lung cancer, I would appreciate being allowed to avoid months and years of debilitating pain. I would also want to spare my loved ones from watching that horror show.

Just because you are old? Nope.

First, because there could be the pressure and coercion from family to 'off' Grandma before SHE spends all that loot. Greed. I've seen greed up close and personal in my financial practice and have seen even the nicest people turn into slavering vultures.

Second, because it might just be inconvenient to take care of the Grandparents, so lets get rid of them. Like an unwanted cat.

Third, because suicide just because you are old, or uncomfortable, or have some disappointments in life, or are momentarily depressed.....this is just giving up and taking a coward's way out. I don't necessarily believe that we are put on Earth to suffer, but I do believe that some suffering, striving, hardship and learning from those are important to living. If you never struggle, how can you appreciate success? Don't give up.

I too am of mixed mind about this subject. Not a good idea I think, on the other hand, having witnessed two 'hospice' deaths I'm not opposed. The hospice deaths were murder, simply, no food, no water, no assistance of any kind except massive doses of opiates. That régime can stretch out to 4 or 5 days sometimes. That is painful for all involved. If that step has been reached why not just an injection to bring things to a close.

The absolute proscription against suicide in Judaism and Christianity is often painted as simplistic. What the sophisticates don't understand is that the slide into "assisted" suicide and then mandated suicide is INEVITABLE absent Thou Shalt Not Kill (including thyself).

Not that the relativists will be deterred. They're just that smart.

The cartoon is particularly menacing if you think of the financial gain behind relieving pain.

"People often ask how do you make money doing that?... The answer is simple.... Volume... that's what we do"

They did a lot of assisted suicide at Auschwitz.

Conversely, keeping people alive can be all about money too.

When I broke my femur at the hip I landed in a nursing home for 10 days or so. What a bummer that was.

I noticed a lot of different things going on. Some people actually lived there. Others I noticed had accidents so severe there was no hope for recovery at all and their lives are pure suffering.

Another was a man who visited his wife in vegetative state. He stayed with her all day long and then went home alone.

Another was a a regular person with a disease that caused them to be basically brain dead with no chance of recovery. The essential portion is already dead. His family came and went throughout my stay there.

I asked the female therapist working with me why do families keep their loved ones alive and she answered with a cross expression and a single word, "money."

It is is a very nice place, but man, was I ever glad to be out of there.

Now I feel sad all over again. Think I'll throw myself off the balcony.

No I won't. Know why? I just came back from half a shopping spree. I bought $123.00 of vegetables, great cheese, fantastic prosciutto that they cut right off the leg, free range chicken that the guy cut up for me so I don't have to do it, andouille sausage made by pros, at Whole Paycheck, I meant to say Whole Food, but I only paid $23.00.

How did I do that, you are probably wondering.

I went to a party and was served salad of wilted lettuce that flat pissed me off. I know the hosts know better than that. I felt abused. Seriously, I did.

So a few weeks later another thing out at the ranch in Weld County. I said, "Please, if you will, allow me to make the salad. I will bring everything and handle it myself." I figured I can make a dozen salads as easily as I make one for myself. And I can. So I did. I took everything needed in a cooler up to Weld and produced a dozen fantastic imaginative salads.

Iceberg wedge, homemade blu cheese dressing in a quart mason jar. The fresh fruit and vegetables cut to size arranged at the bottom of the wedge but not touching the blu cheese dressing. That way each guest can have unadulterated watermelon, grape, avocado, in its raw form, in its pure fresh state. Then by their own volition let some touch the blu cheese and go, "Fucking ACE! I did not know that would turn out such a great combination." As if they they contrived the combination themselves. Because they did!

A few days later a card comes in the mail from one of the guests, "Thanks for making the salads." It accompanied a $100.00 gift certificate for Whole Foods that I've had in my wallet since.

So glee from that causes me to not want to off myself today.

The nursing home report about me called me a nutter. They said I was anxious and overly unsettled. I sped around the halls in my wheelchair at night until I exhausted myself. They don't like that.