The famous photograph of raising the flag at Iwo Jima that immediately struck the heart of a nation, the first photograph to win a Pulitzer prize in the year of its publication, depicts the second raising of a larger flag ordered to replace a smaller flag that was raised earlier that day. The men shown are not taking fire. The first smaller flag was raised following a blistering bloody five day ordeal overtaking the Japanese stronghold of Iwo Jima, the flag ordered raised on the strategically important Mt. Suribachi. Three Marines depicted in the photograph made famous were killed in fighting over the course of the following few days. Two Marines and one sailor survived the war.

Patriotic Fervor and the Truth About Iwo Jima. hnn.us

Publishing these facts led to no end of trouble because it is the intense feeling the photograph evokes, and its monumental statue, and the statue's many copies all over the place, and statue's original mold and its cement prototype, and its plaster model, and its miniature all evoke that count, and not the pedantic facts of first flag vs second flag and of the men involved in the scene.

Although, the men depicted in the famous photograph are all hailed as national heroes while the original men do not get that same recognition. Conversely, they do get recognition, after all the holiday is for the fallen, and if not fallen in service, another holiday for having served. But not the intense national personal recognition received by the group of sex men raising the second flag. Men who served in the war will say that does not matter. They will say the people who did not come home are the true heroes. I say they all are. I am simply awestruck. 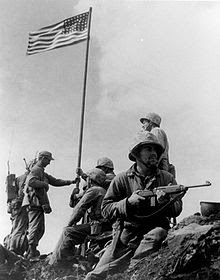 It is interesting to me the photographer, Joe Rosenthal, with a small group of photographers had to break military restrictions, bust a move on their perimeter security, in order to get at the scene and take these photographs that touch pretty much everyone who sees them. I recall my own puny security fence violations at bases here and there as a boy, I could not do that today.

Here's the thing. The image is appropriated for all kinds of things, anything involving a long and hard-fought struggle. I've even seen the U.S. flag replaced with rainbow colors, a long hard struggle, yes, in the courts and not under direct fire. The usage, the appropriation of the composition, I find... inappropriate.

In that same sense, and it is only a sense, a personal sense, the flag in the photograph has forty-eight stars and that number of stars with its distinct pattern lock the men in their time at that place under those conditions, and by using modern flags on the monument for today takes the real life men out of their time and places them in ours. Perhaps that is fine. The image is timeless, so I suppose that is okay and we are living as we are today because of these men and what others like them did for us and our prosperity, their posterity. I do see the appropriateness of us using a fifty-star flag for the timeless nature of gratitude, but I do also prefer a forty-eight star flag used to place these men in their time. It is only my personal sense.

Sometimes I do not understand myself.

Here is a go at trying to understand myself. Imagine a statue made of Washington crossing the Delaware. What flag do you think is appropriate?

As to fame, as to recognition, shortly before he passed I asked my dad what his ribbons meant on his uniform. I asked what each one means specifically. They tell his whole history. They read like a curriculum vitae, his patient description sounded like a résumé of a sort.

"This one is for serving in Korea."

"I didn't know you were in Korea."

"So you weren't in Korea but you got the ribbon?"  Oh, I am so clever sometimes.

My dad looked straight at me and laughed in good nature at his little dummkopf. How stupid, how pathetic I am, how tender.

"Okinawa was the center for communications in the Far East during the Korean War. We were prime target during that war. It was very dangerous."

"Oh."  I felt like an ass. Because I am one. I've seen the photographs he sent home. I should have known better than that.
Posted by Chip Ahoy at 4:47 PM

I have a framed 48 star flag I have had since I was young. Back when 48 stars were all we had.

I also have a 42 star flag, which also has a nice arrangement of the stars. It's too large to frame. I wasn't around when that one was current.

Another article from the site, stating what I had thought was the lone opinion of Navy historian Richard Frank, that Iwo was as big a mistake as Peleliu or Tarawa.

Those star people sure are good with math.

48 is easy but 50 more difficult to fit into a proper rectangle. It's like they were into Common Core before it became popular.

Whatever it is, it is awfully clever mathematically.

And this makes me concerned for adding a state. Only for the pattern of stars. Surely they must add two states at a time, or the odd number will throw off our stars. And that will not do.

They could have probably starved them out.

If Obama were president at the time he would have bored them to death through inaction. A great savings in life.

PS Sixty, that flag is from the first 6 months of 1890, when WA had been admitted, but ID hadn't.

The article about Iwo Jima is BS. Iwo Jima may not have 24,000 B-29 crews but is certainly saved thousands, and would've saved even more if the war had lasted until Nov/Dec 1945, or if we'd had to invade Honshu - scheduled for early 1946.

Further, the fighter escort from Iwo shot down hundreds of Japanese planes and would've shot down more (and saved a lot of B-29s from being shot down) except the Jps decided to save their planes for the invasion Kyushu.

And of course, having Iwo allowed us stage B-29s from there and hit targets in Japan that would've outside our range. It also allowed LeMay to "turn on the lights" and work his supply/maintenance men 24 hours a day. Result: more B-29s hitting Japan.

I don't know who thought it was "easy target" - The Marines didn't -which is why they wanted a longer bombardment. And the planners didn't which is why they used 3 divisions to assault a small island.

The key that struck me in reading about the flag raising was: What young men!

rc, all I can tell you is that's the second article I've seen to say that and the first was by the Navy's chief historian, Richard Frank.

PS They were pulling kids out of high school and IIRC, the draft age was about to be lowered.

Consider, for example, that most of the hot shot battalion commanders running Ranger or airborne battalions during the war were only about 30.

Very unbrilliant observation that the thing that makes the Iwo Jima photograph so masterful is the diagonal of the flag pole. Unbrilliant because it's so obvious. And yet at the same time it's startling: the power, the dynamic that a simple diagonal imparts to the composition. If you watch the motion picture recreation you'll see. The second the flag is raised from the moment of planting diagonal to upright it's like the air going out of the room, pictorially.