Usually cookbooks are not nearly this entertaining. I am enjoying the heck out of this book. Written by Samuel Arnold, recently deceased, owner of the Fort restaurant in Morrison, very near to the last home my parents owned. Now the place is run by his daughter. He has other books too. 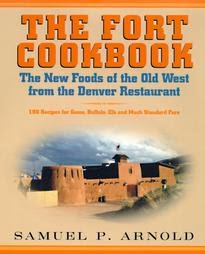 I am having so much fun reading through this book, I intend to put up a few more posts. Arnold is quite the character, his irrepressible personality jumps out from every page and veritably throttles you. He considers himself historian and educator, the best sort, unaffiliated with university, unbeholden to their dogma, their politics, their unhelpful indoctrinations, their tendency toward mind-control, their woeful costs.

We learn as we go, Sam Arnold went to academy at Andover and disappointed his father,

"I didn't send you to Yale to become an innkeeper."

But boy, what an innkeeper he became, an educator besides, and a real one at that one who educates by living and doing and showing and sharing. I am certain had his father lived he could only be proud. Host to presidents. Host to G-8 summit. Host to educational events throughout the year, and they're fun besides, playing music with makeshift instruments, eating strange early indian and trapper and trader and cowboy food, shooting off canons across the valley, having a great time.

If you visit Denver your visit will not complete without stopping for dinner at the Fort. Nestled against a red rock outcropping 90 feet high. Holly, Arnold's daughter delivers a touching forward describing playing on the rocks as a child, playing house and tea parties with a bear that lived for years in the compound along with their best friend, an Alsatian, German shepherd dog. Now you will notice rattle snake warning there on the rock and I am fairly certain that is to discourage climbing around. Presently there is a Hopi-style art installed near the peak of the red sandstone outcropping. Holly describes finding arrow heads there. I'm jealous already. 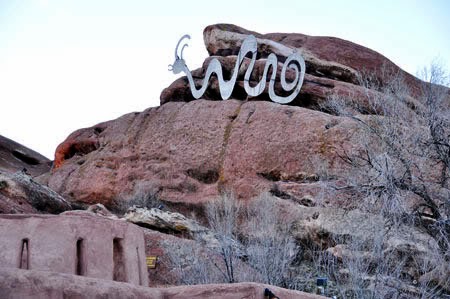 Searching for a handy image [art snake "the fort " denver] Google images produced my own photograph from an earlier visit.

The Fort is a close replication of historic Bent's Fort originally a trading post located in Southern Colorado. That original fort burned down and some suspect the owner torched it himself as a last ditch effort to avoid the place being  turned over to government. Too late. Too bad. The government has the land anyway. The original fort was rebuilt using original plans and the architects hired Arnold in Denver as consultant.The replacement Bent's fort near La Junta Colorado is operated  by the National Park Service, so most likely closed when purely political presidents chooses to make a vindictive point. Not so privately owned restaurant with all the same educational activities. No mention here of Sam Arnold assistance or his restaurant The Fort in Denver. Still it might be worth visiting, who knows? But why bother with government types when the more friendly and more welcoming Fort restaurant is so close to town?

Bowl of the Wife of Kit Carson

In the spring of 1961, two years before opening The Fort, my family and I found ourselves stopped during a road trip to Mexico in Durango (Durango, Mexico) some 600 miles south of the border [...] We were told that the best place to eat was the drugstore. [...] We watched a stream of young children coming in from the fields to fill family lunch buckets with a special soup. It smelled so good that we tried it.

[...] Caldo tlalpeño was its proper name, we learned, and when The Fort opened it went on the menu. Nobody could pronounce it (or knew what it meant) so it didn't sell until one day Leona Wood, the septuagenarian who ran our gift shop trade room on weekends exclaimed, "I remember my grandmother serving us this dish!" Miss Wood happened to be the last granddaughter of frontiersman Kit Carson. And so "The Bowl of the Wife of Kit Carson" was christened. For thirty-four years it has been a signature dish of The Fort.

The "tl" combination gives the clue to a Central American Indian word. It is one of sixteen administrative boroughs of the Federal District of Mexico and the site of an unusual round pyramid thought to be in imitation of a nearby volcano. Tlalpan was a pre-Hispanic village at the intersection of a number of roads connecting to Tenochtitlan, Mexico City.

Cook the chicken in the broth, remove and cut into slices. return to pot with other ingredients. Divide equally among 4 deep bowls.

Interesting. No mirepoix, no soffritto, no onion, no garlic, no tomato, no bay leaf no lime in The Fort's version. It seems to me insufficient.

But then, an even simpler version of this was served at one of my favorite places, Mary's on Colfax, unfortunately open for only a few years. It consistently drew a large crowd. It was a plain clear but rich chicken broth served as first course with scant diced tomato and scant avocado sitting at the bottom and it it was outstanding.

On the other hand this version seems unnecessrily complex with courgette (zucchini) and garlic, chayote and carrots but no celery It has a lot more going on.

Notice the careless cross-contamination that would shut an American restaurant right down, boldly displaying the offending hands there for the world to see, in front of small children even.

This version  makes more sense. The chayote squash is also called mirliton in grocery stores, or merleton in creole and cajun cooking. It grows on a vine in Louisiana and has the texture similar to apple. Epazote is not so commonly seen in regular grocery stores here.

I want to buy this woman a bigger pot. She scares me by continuously filling the pot to the brim. I notice also the woman is using a knife remarkably similar to the Green River knives mentioned in the early pages of the Arnold's book, used by hunters and trappers and known to be carried by Kit Carson. Surprisingly inexpensive for knives. Most likely not the same knife, but it does look like them.

I notice her saying "quesso oaxaca" (wa ha ka) a semi-hard string cheese, very good by itself. It is sold in ordinary grocery stores here and among the least expensive cheeses available.

My girlfriend is on a lifelong mission to feed everybody.

So, I'm learning to appreciate your outlook.

I bet she would really enjoy this book. Not so much for its recipes and odd outrageous ingredients but for its attitude.

The first time that I ate SOS was at Fort Leonard Wood. I loved it.

What synchronicity. With nearly 4 pounds of cubed Pepper Jack left over from a graduation party, I've been searching for recipes. Now if you have anything in Colby and mild cheddar...?

The shrimp tail resembles a scorpion tail, and the jalapeño pepper is the scorpion sting. Thus the name.

Add half the milk or water at first and use rest to adjust the consistency.

I like to dust the whole thing with flour before the batter for even better adhesion.

They should brown and fry almost immediately. If cheese leaks through then it splatters dangerously and messes the oil.

drain on paper towel, scarf immediately, do not share.

I am so going to do this. It's going to blow peoples' minds around here. They love hot things.

That video includes chicken feets. Any soup recipe that has chicken feets will be outstanding. No part of a chicken makes better broth than the feets.

I buy them at a Mexican grocery store.

I am ordering the book today.

The Bents are actually very interesting characters in the history of the West. I just purchased a Western novel about them called "The Adventures of the Brothers Dent" by Terry Grosz. It is a Kindle special for $2.99 and a great bargain. I get a bunch of books that way every week and fly through them.

The story of the Bents is the story of the American West. They went to the mountains to trap beaver but found commerce much to their liking. Until the government decided to take over their business and they decided they would rather burn it down and live free than knuckle down to the powers that be.

We can learn something from the Bents.