This is a joke that nobody gets, and I mean nobody. I showed this card to some twenty people before mailing it and not a single person understood the gag. And jokes are simply not funny when they must be explained. Can you imagine how frustrating it is to go through such trouble as to construct a three-page pop-up card, to be so hilarious as this and have no one understand? Like I am the weird one?

I almost ripped it up in disgust. The thing is, the viewer is expected to notice there are two breeds of dog. Two different types. Is that so hard to notice?  It is so obvious. This card convinced me it is an American thing that jokes need be glaringly obvious, overt, slapstick, cutting, hurtful to somebody, childish, and involve no thought at all, because I can draw the same joke in one picture, post it on a British satire site, and be congratulated for my impressive sense of humor. Make that humour. 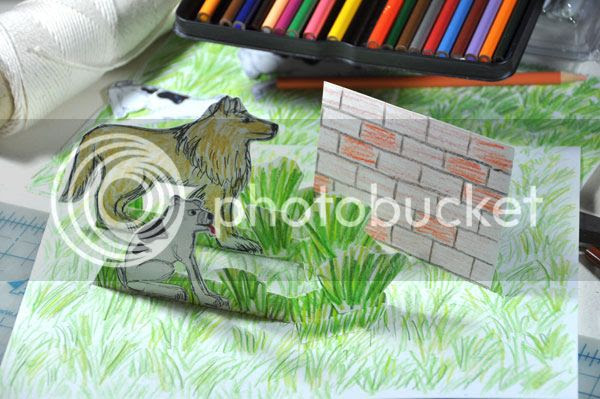 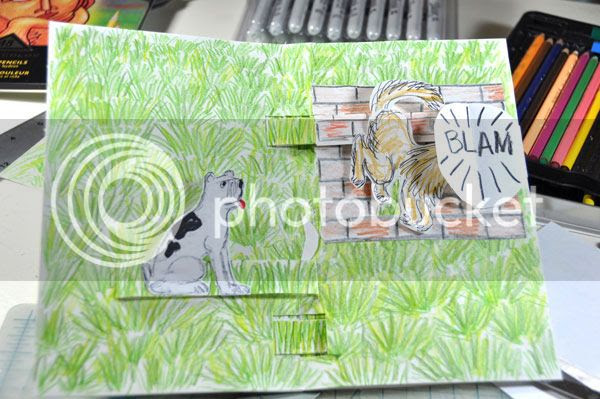 The dog actually moves into the wall and the word "BLAM" flips out of the wall. That took some effort to get right. 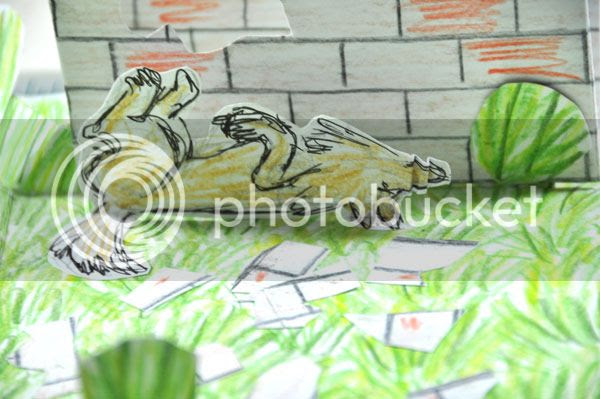 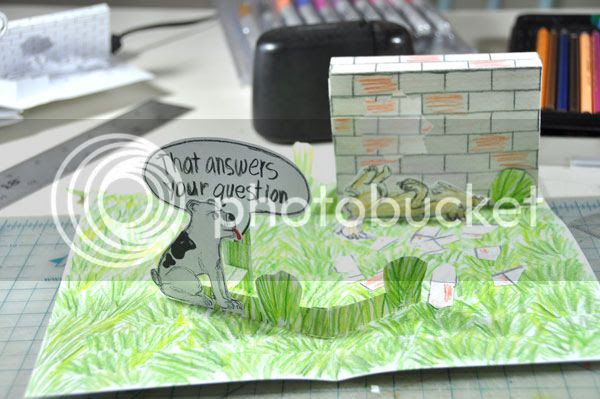 "That answers your question." This one page is the whole joke. It should be a one page joke but I stretched it to three to make the joke easier to grasp.

I get angry all over again just thinking about it. I hated having to explain it. It ruined the whole effort. Nearly put me off cards altogether.

Look at that, there's a hole in the wall. 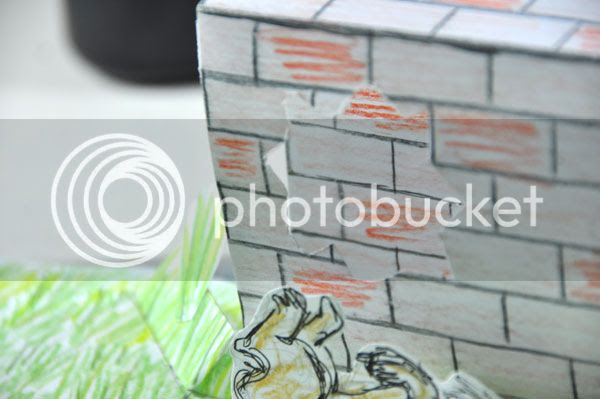 Bashed in nose, bits of brick laying around. Come on! That's funny! 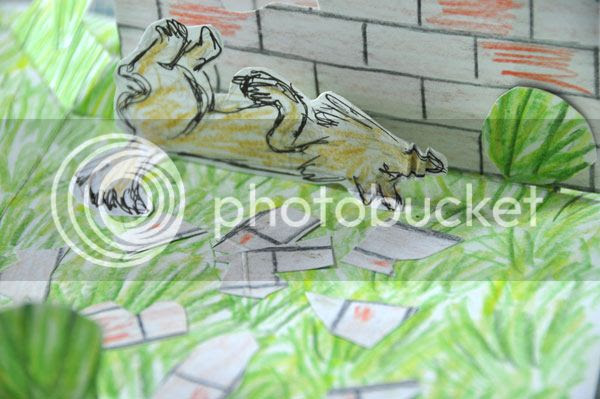 I give up. More of this disappointment here.

When you used to nick Althouse pics and photoshop them, I almost always got the joke.

Chip - what Meade means here is you used to dumb down your jokes.

I had to go to the link to get the joke.

If that had been an electric brick wall with a blond on the other side it would have been hilarious.

Meade, the photoshops and cards are not always jokes. Maybe that's the thing. I'm expecting people to know when I'm joking and not and I suppose that isn't fair. I miss your wife's photography. She is very very (two verys) good.

Somewhat off-topic, yet related given the themes of the post and the comments.

I found the post on Invisible Fences to be an almost perfect analogy with TOP.

That's the exact response many have with the changes over there (and the moderation is not the only, nor even the biggest, change). An invisible fence went up and led to almost the exact same sort of response by commenters.

"That answers your question."

To the present post, although an aficionado of British humor, I didn't get the joke either. The problem, or the issue, is that it insists on attention to detail. I didn't notice the dog was a pug until clicking the link. Two different dogs, sure, but I didn't notice the key to the joke was in the precise difference of these two breeds. How does one highlight focusing the attention on the very specific detail that brings meaning to the whole without undermining the scene as a whole? That's an artistic challenge indeed.

Oh its a pug dog. OK, now I get the joke. I thought it was more of a New Yorker cartoon type joke, where we imagine the question ourselves.

Yep, its all in the details. Its hard to see that its a pug dog.

The pointy dogs face is smashed in. It's crumpled. But even without that one asks, 'what could possibly have been the question?" And see the dog smashes into a wall. The joke works as a simple sketch even without much analysis. But it worked on a British site because one is expecting a joke and not necessarily expecting one with a card.

Oh no... I just realized that we had a big yellow dog and a smaller black and white dog... and we just had to have the big yellow dog put to sleep...

So I suppose the big yellow dog now knows the answer to the question.

I told a joke to some dozen of my relatives around a breakfast table at a favorite restaurant and when finished they all looked at me blank face waiting for the punchline that I already delivered.

Two guys live together and the mother of one suspects her son is gay but he hasn't come out to his family so his mum devises a plan to find out. And she does find out, in her way.

They invite her to breakfast. That's what made me think of the joke. Weeks later the two discover a piece of silverware is missing. A ladle.

One is convinced the other's mother stole it. No other explanation is possible. Nobody else was around in the intervening period. The one convinces the other to ask his mum if she took it but he feels very uncomfortable asking, charging her with such a petty crime.

They fight about it, argue, at length the son agrees to ask his mother if she took their silver ladle. But he feels really strange and uncomfortable about the whole thing. But he must to patch things up.

"We're missing a silver ladle from the set. Oh gosh, I hate hate hate asking you, but, did you take it for some reason when you visited?"

She doesn't say anything for a very long time. Finally she looks up and says,

"If you were sleeping in your own bed you'd know where your ladle is."

Now that there is fucking FUNNY!

No reaction at all.

I said, 'Goddamnit, I give up. I'm never going to tell you a joke again. You're all duds!"

I was mad as hell. It was so typical!

Then finally by brother's friend says,

Fuck me. I do give up. The guy didn't know what a ladle is. None of them were willing to piece together the unstated bit that reveals the essence of the joke. It's not a joke outright where someone says something that harms another person so they don't get it. Insufficiently slapstick. Insufficiently hurtful. There is no brunt of the joke. Just a missing piece, a bit of clever detection required. Cognition is needed to follow and visualize the scene and deduce something is missing, and get that part right, my whole family is incapable of that. It's not a joke to them. They just looked at me like I'm the one devoid of humor.

I live in a joke-straightforward world.

Pointy face dog, "say, why is your face smashed in?"

Pug face dog, "Take a run straight into that brick wall and find out."

You tell yourself the joke by the overt clues that are given.

And crack yourself up by the hilarity that occurs by your own deductive powers, hilarious when you figure it out by yourself. And not funny at all when explained. And that's why I give up telling jokes.

Chip, I had a cousin who would respond to a punch line with an earnest... "And then what happened?"

And he was bigger than me, too, so I couldn't beat him up.

I thought it had to do with the question of which dog was smarter or who was brick stupid. Because I couldn't imagine a dog being dumb enough to get up and walk BLAM into a brick wall.

I too had to go to the link, after which I found the big dog's crumpled nose funny, but not before.

Still, I *still* wonder if folks get the jokes. It could be just me. OTOH, that might not be so.

I thought the joke was whether or not the dogs were blocked by a hallucinatory electric fence or by a real brick wall. The truth could only be discovered by experience and not by reasoning.....There's something in nature that doesn't like a fence, especially when it's a brick wall, especially when it is erected randomly for no obvious exclusionary purpose. It is the existential destiny of nosy dogs to examine the nature of boundaries. Pug nosed dogs can be said to represent a priori reasoning. The pug nose represents Ptolemy; the collie is Columbus. You don't know the limits until you've tested them.

"I miss your wife's photography. She is very very (two verys) good."

You're welcome back anytime, I'm sure. Feel free to email her if you have any questions or concerns you'd like to keep private. Thanks.

In the not knowing the limits until they've been tested category: This, also covering the "It's not personal...it's business" theme.

As for after and over thoughts on the Collie as Columbus, and other dogs at sea: