I almost feel sorry for the man were he not so arrogant, so coddled, so self-deluded in imagining he comes off super cool for playing the role of president playing the role of the man by position and position alone tossing the first ball or whatever it is that they're doing. He did not have an older brother to tell him how his athleticism is pure crap and no real father to teach him either as most boys do. I relate to him throwing like a girl. He thinks he is throwing well while it is obvious to all who sees he is not.

Man, this does take me back. Way back. Memories of happiness admixed with sadness and success tainted with failure, but failure that lingers to this day.

I too had an absent father when it came to athletics. He simply was not around long enough for much of  that even if he did have an interest in sports. Although I do recall one brief episode at another place a few years later of my dad tenderly lobbing baseballs to me for practice at batting. But just once. It was a blowout practice session. Frankly I sucked. Never did hit the ball even once. Coordination simply was not there and his "keep your eye on the ball" instruction did not make sense and repeating it did not help. It just did not compute. So unsatisfying for both of us.

Whatever I managed was learned through the patience of my older brother, Barry, whose patience was limited. The throwing lessen was not with a baseball, rather, with rocks thrown off the edge of a cliff.

At Benton AFB, beyond the firing range, beyond the blueberry bushes and apple orchard, surround by woods on three sides and near to the lake. Dad was there the whole time at Benton but he was working all day and not at the rock throwing scene. 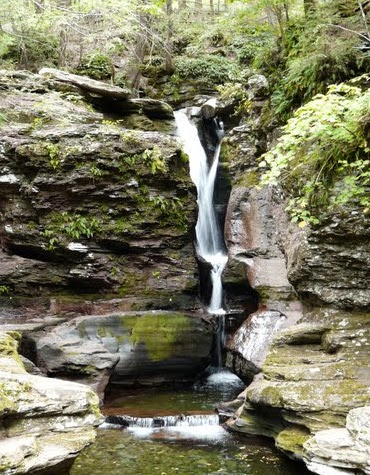 Barry would take off in the morning and not come back home until dinner. Eventually we were provided watches to coordinate. Watches!  I was inclined to hang around, running in and out of the house. I'm convinced Mum told Barry to bear with me due to her own impatience with my tendency for clinging. I sensed a bit of resentment from both. I could be a pain in the butt.  At that age the gap of one and a half years does make a difference when it comes to keeping up and athletics.

On one of our daily hikes around the environs of Benton Barry stopped to throw rocks off a cliff so I joined naturally copying. I did everything he did. I threw rocks like he threw rocks for what developed into a rock throwing contest for distance. After a few throws Barry quipped flatly looking straight at me,

I was crushed. Destroyed. I couldn't believe what I heard. My world inverted.

Now this was a maddening assessment that haunts me to this day. It does. I am still self-conscious of that harshest of criticisms and it lingers every time I pick up something to throw a nagging voice whispers, make sure you don't throw like a girl.

"How should I throw then?"

Barry showed me what I was doing, exaggerating my motions to make the demonstration clear,  and how I should be throwing off the side.

Then I copied his masculine ways. It was an inferior technique for me for throwing and my rocks did not go as far. But that would be the way I must throw or else I will look like a girl. 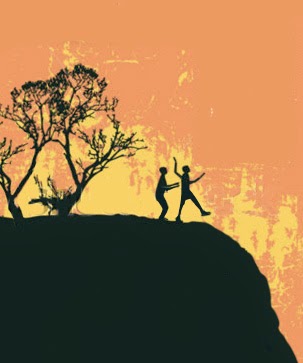 Bastard. But I must at least thank Barry for having patience with such a spaz for a younger brother. That must have been intolerable at times. Even if his motivation was averting me embarrassing him in front of others.

This is truly embarrassing. On a national scale. Now I see what he means. 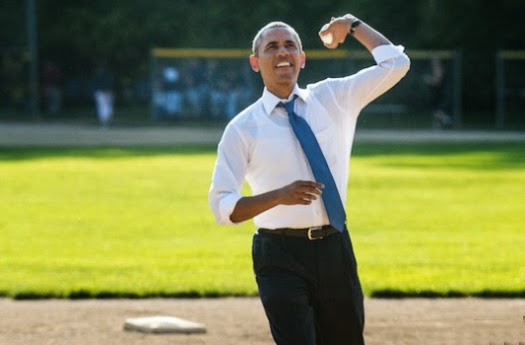 Thank you, Barry, my forbearing brother. I am certain this is how I looked to you. Decades later I related this incident that left such  scar to Barry who didn't remember  and he cracked up laughing.
Posted by Chip Ahoy at 3:20 AM

Depending on whom you ask, Choom does a lot of things like a girl.

We should not be able to see through his shirt.

He should be be wearing a T-shirt underneath, not an A-shirt.

His collar should be buttoned. Are we really supposed to believe he's worked up a sweat?

Props on the sleeve roll but I'm going to assume there's a presidential valet who does that for him.

There are these parents who go to the little league games and shriek at their kids to play better.

Too much of a good thing, IMHO.

Saw a great graphic the other day analyzing Obama's throwing motion. He actually throws like a spastic girl.

I keep picturing Lamar from revenge of the nerds.

What a heartfelt and touching piece, Chip. The shame is it does not take much to teach someone to throw a baseball correctly. I coached baseball for 30 years. I did a short stint of softball. Both girls and boys can be taught to throw correctly w/ teaching the proper technique and a little supervised practice. Like anything, some kids get it quickly. Some take time. But anyone can be taught. It's not too late Chip!

I have to echo Nick. What a great post brother! You are a very talented man and Lem is very lucky to have you gracing his blog with your insight and talent.

I am an old guy now and I don't understand the younger generation. I mean I guess grandpas have been saying that since Fred and Barney were hunting Brontosaurs burgers. When I visit the family and the younger Dads are hanging around they are all in front of the TV with their kids playing some zombie killing video game. I often bring over a football or a baseball and try to get the kids to go outside and start up a game. Don't you know that some of the neighborhood kids start to join in and before you know it we are all playing in the street like back in the day.

Until the Moms find out and freak out and force everyone to come inside.

It is the continual feminization of America. You can't play on the street dodging cars and breaking windows anymore.

Leo Gorcey and Huntz Hall must be spinning in their graves.

Hussein throws like an Indonesian. Which he is. Whether he does it like a Chinaman is between him and Reggie.

I think that might be completely standard form for the Indonesian variation of basketball, in which they use coconuts and shipping crates. You get bonus points for a bank shot off a coconut cluster, which is the shot Obama is mimicking here.

It was invented by plantation owners as a way to trick kids into bagging their crops for shipment.

My son played ball but was not very good at it. All that mattered was that he got to hang with his buddies and he enjoyed it.

Mom...sat frustratingly watching as son ran the bases flailing his arms like his hair was on fire. Not kidding. I eventually gently inquired about this wild stride of his. He dismissed it until the day he caught himself on video running exactly as I'd described. He laughed. "I DO run like my hair is on fire, Mom!."