The Fort's nine dining rooms are built around a central courtyard. In Summer months a typical Plains Indian tipi stands in the courtyard and may be booked for special private dinners. It can accommodate up to twelve people , and shoes must be removed within. Since servers must work on theri knees, they get an extra twenty-five dollars. (Is that all?)

Oddly both spelling tipi and teepee are used. 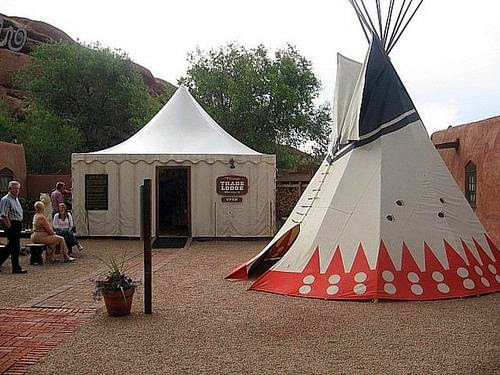 Bent's Quarters, a private dining room recreates much of the feel of the 1840's.  A collection of medical herbs of New Mexico and various items of the fur trade period line the shelves; knives, beads, buckles, musket caps, tobacco twists and "segars," tea bricks, loaf sugar, Florida water, lucifers, and much more.

Bent is the name of the original fort in southern Colorado from which The Fort restaurant is modeled. 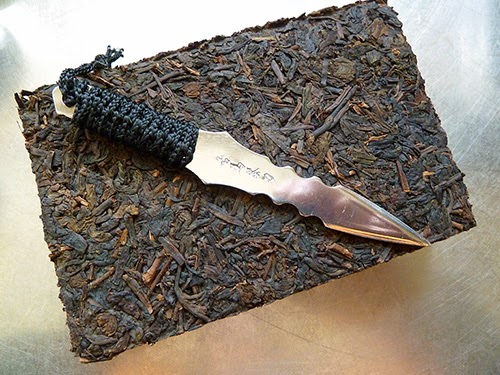 Florida Water is an American version of Eau de Cologne, or Cologne Water. It has the same citrus basis as Cologne Water, but shifts the emphasis to sweet orange (rather than the lemon and neroli of the original Cologne Water), and adds spicy notes including lavender and clove. The name refers to the fabled Fountain of Youth, which was said to be located in Florida, as well as the "flowery" nature of the scent. 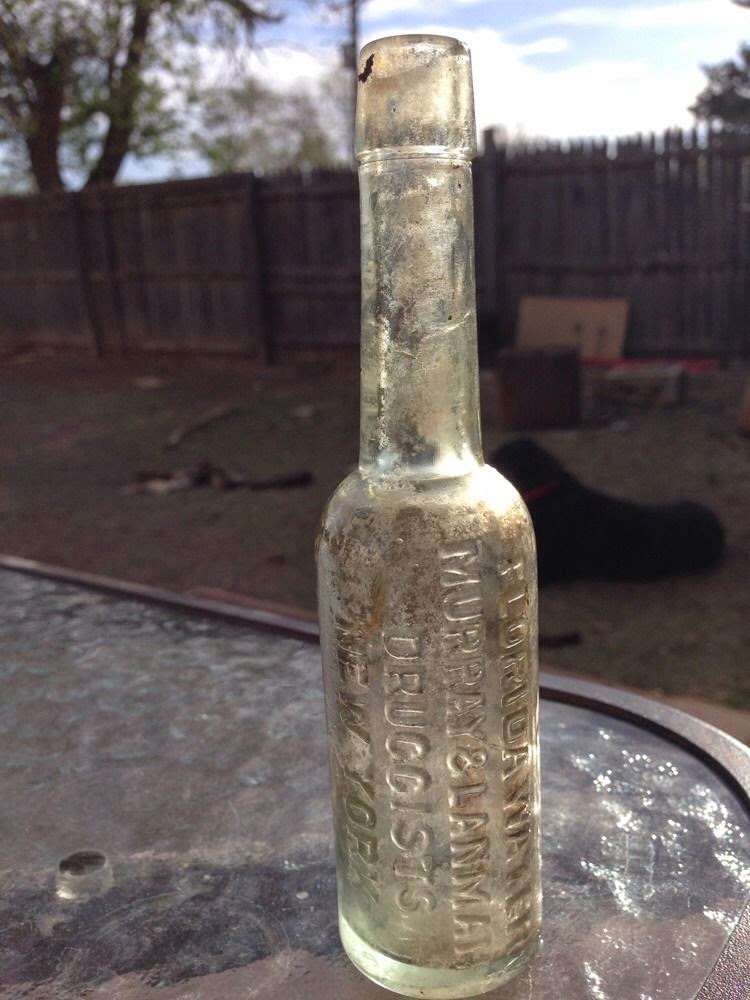 In 1829, Scots inventor Sir Isaac Holden invented an improved version of Walker's match and demonstrated it to his class at Castle Academy in Reading, Berkshire. Holden did not patent his invention and claimed that one of his pupils wrote to his father Samuel Jones, a chemist in London who commercialised his process.[16] A version of Holden's match was patented by Samuel Jones, and these were sold as lucifer matches. These early matches had a number of problems- an initial violent reaction, an unsteady flame and unpleasant odor and fumes. Lucifers could ignite explosively, sometimes throwing sparks a considerable distance. Lucifers were manufactured in the United States by Ezekial Byam.[6] The term "lucifer" persisted as slang in the 20th century (for example in the First World War song Pack Up Your Troubles) and in the Netherlands and Belgium today matches are still called lucifers (in Dutch). 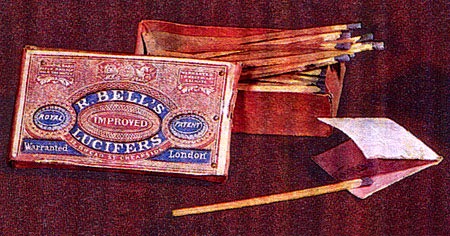 
Back to The Fort.

On the east wall of "Bent's" hangs a wonderful oil painting of the Western Engineer, the 1819 flagship of Major Stephen Long and his army on their reconnaissance expedition up the Missouri River. The primitive steamboat had a sea serpent head that belched steam and a serpentlike waterline to throw fear into the Indians observing from the riverbank. The painting was done for The Fort's thiritieth anniversary by Gary Lucie, an artist well known for his intricately detailed and accurate renderings of steamboats and historic American waterways.

This steamboat is the impetus of this post on account of the sea serpent. I have never heard of such a thing.

[A letter dated June 19, 1819, from St. Louis, ten days after the boats arrival there, further describes this unusual craft:

"The bow of this vessel exhibits the form of a huge serpent, black and scaly, rising out of the water from under the boat, his head as high as the deck,darted forward, his mouth open, vomiting smoke, and apparently carrying the boat on his back. From under the boat at its stern issues a stream of foaming water, dashing violently along. All the machinery is hid. Three small brass field pieces mounted on wheel carriages stand on the deck. The boat is ascending the rapid stream at the rate of three miles an hour. Neither wind nor human hands are seen to help her, and, to the eye of ignorance, the illusion is complete, that a monster of the deep carries her on his back, smoking with fatigue, and lashing the waves with violent exertion. Her equipments are at once calculated to attract and to awe the savages. Objects pleasing and terrifying are at once placed before him--artillery, the flag of the Republic, portraits of the white man and the Indian shaking hands, the calumet of peace, a sword, then the apparent monster with a painted vessel on his back, the sides gaping with portholes and bristling with guns. Taken altogether, and without intelligence of her composition and design, it would require a daring savage to approach and accost her."] 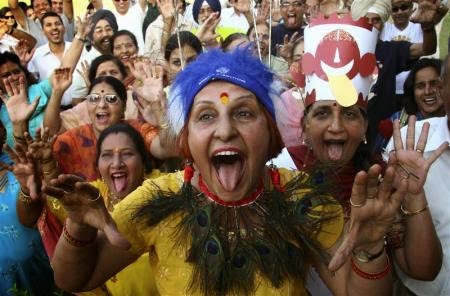 [My first boss at the FRB was a troll of an old man who smoked a pipe and stank of it. He was very close to retirement and completely old school nose-to-the-grindstone type and his speech pattern was unique involving a lot of "ohs" and a mouthful of saliva. Near the end of each shift all workers would gather in a mad rush to get out the checks processed that evening behind a wall of bins representing each bank. His voice was easy to imitate so in his absence I copied it, a fairly food rendition, from the other side of the bins and put words in his mouth he would never speak in his life involving swears. Then show myself to the workers on the other side and have a good laugh. Within days everyone there had their own version of his voice some much better than my own and saying imaginative and ridiculous things as boys do and thereafter none of us could listen to him with any seriousness at all. It was hopeless. We could hardly contain our laughter with serious matters. He carried these kind of wooden matches in his pocket and told us one time he brushed against a bumper of a truck and they ignited inside his pants. Naturally that became incorporated in our routine.]
Posted by Chip Ahoy at 1:52 AM

"Bent is the name of the original fort in southern Colorado from which The Fort restaurant is modeled."

Technically, the name was Bent's Fort, as it was owned by the Bent brothers.

What a fantastic project it would be for Eagle Scout boys, I think that's age 11 - 13, not sure, to build a replica of the Western Engineer, maybe even full size. Daunting task but with enough time and help from local lumber yards, boatyards and engineer types it might be doable. What a launch day that would be! And then they could sell it to the latest uber-rich guy who said the "wrong" thing. For a gazillion dollars. As protection.