NYT: A dispute between Amazon and Hachette

Malcolm Gladwell: "It’s sort of heartbreaking when your partner turns on you. Over the past 15 years, I have sold millions of dollars’ worth of books on Amazon, which means I have made millions of dollars for Amazon. I would have thought I was one of their best assets. I thought we were partners in a business that has done well. This seems an odd way to treat someone who has made you millions of dollars."

"Amazon has been discouraging sales of books published by Hachette in an effort to make the publisher come to terms on a new contract for e-books. The confrontation has dominated publishing and bookselling circles. Amazon has been heavily criticized for using writers as pawns, although it also has its defenders." 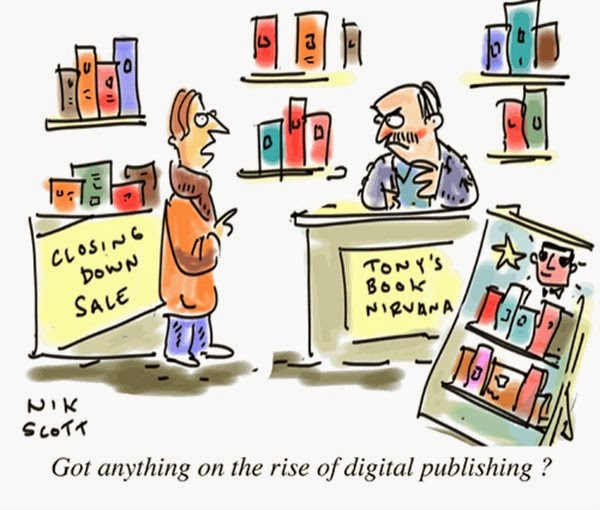 Tell Malcolm that it's nothing personal, just business.

There's another side to this, of course. Read here for a good summary of it.

Key graf: "No wonder Amazon is unwilling to continue the conventional arrangement. Amazon can only successfully sell its books up to a certain price, depending upon the format and length. Due to the distribution discount system, a higher retail price means a higher distribution price, so Amazon makes half the margin on the more expensive, more steeply discounted books from the major publishers. Amazon is not only perfectly within its rights, but logically needs to stop discounting the book from what is, after all, the publisher's suggested retail price; Hachette's complaint is rooted in the fact that Amazon is now selling its books for the price that Hachette itself suggests!"

I always assumed that the Barnes & Noble made its money from selling coffee and muffins.

Lost me right off. The whinging has a tone to it that flicks off my sympathy circuit.

From what I understand of the situation Malcolm, I was unaware of the name, I had only heard "publisher" before, pines for the day books were sold ridiculously high. They want ebooks to be more expensive, he wants consumers to pay more. He brags to making millions for Amazon, and his greed demands more. He's thinking, "I could have so much more!"

Go Amazon! Changed the world for the better. Malcolm is a recividistxxxx recidavistxxxx recidivatorxxxxx guy who wants things the old way, uck'em fay is what I say, fuck the hog in iglatin pay.

OMG! One of my giant extravagantly overly-finned angelfish is lying tits up in the grass in the tank. D - E - D, DED!

I picked up some Italian while there. I used to kill time at one in Hoboken.

I have an e-hearing app on my phone. I suppose I would hear more if they were cheaper.

I lost a tooth recently and instead of disposing of it, as I've had in the past, I held on to it.

The tooth is in terrific shape, as long as you don’t flip it around and look at the hollow base.

It shines like a jewel when I hold it at the right angle.

I suppose it means something... that I'm holding on to it.

Something to do with death? Maybe?

I hope I'm not sharing too much.

Lem, I think it means some Haitian voodoo cult stuff rubbed off on you at some point. Do you make a point of holding on the hair abd nail trimmings?

Put it under your pillow and wait for Titus.

No, no nail trimmings.

The destruction of Barnes and Noble by Amazon is just desserts.

And not just coffee and muffins.

I can't read whatever Malcom was on about. What gets me, too though, is that IIRC, the discounts at Amazon reduce the amount of money that goes to the author, too.

Now, if it's true that a heavily discounted book reduces Amazon's share while the publisher gets their entire percent, which is the reason to have the book listed so high to start with... the author should get his 8% or whatever piddling amount goes to the author of that 'list price'. I don't think they do. But I don't know because the publishing industry is extremely hush-hush about their actual business practices.

Yes, the authors get hurt by the fighting, but pretending that it's Amazon that's hurting the authors and not their abusive relationship with their publisher is... not supported by the facts.

Of course most publishers are still trying to argue that ebooks ought to cost just as much as paper books do because typesetting costs...

Barnes and Noble destroyed the owner operated Mom and Pop bookstore. I always tried to support them when I could. I still shop at Mysterious Bookshop when it was in midtown.

So it is poetic justice that Amazon is driving Barnes and Noble into the ground.

E-books have better prices than physical books, and will soon have better selection, if they don't already.

I for one will miss, and do miss the absent already, small family book stores. I just checked for my favorite one with a history bent in Livingston, Montana...it seems to be gone since I was last there a couple years ago. It was one of those old places where a hand shake was all you needed to buy a book, trust was implicit. Owners had bit of bar sawdust and chips on their shoes or boots. My kind of people. Now I have to ask friends who live out there if the store is really gone or just not listed on Yelp, etc? Last book I bought there was "Empire of the Summer Moon."

What is Malcolm complaining about? Why does he even need a publisher? He could sell his books himself using E-format and do it directly. No middle man.

The Big Publishers are parasites. They add nothing to most books except the price.

BTW, I refuse to pay the same price for an E-book that I do for a real one. There's no excuse, except greed, for the price being the same.

You can add in the fact that I can sell a real book if I wish, but can't sell a Used E-book.

"The Big Publishers are parasites. They add nothing to most books except the price."

Well, they're *supposed* to add editing, artwork, marketing, and production.

From anything I hear the editing is iffy, the artwork might be okay, the marketing is non-existent, and production is... slow and complicated.

Self publishing will put the Simon and Schuster's out of business in the next 20 years.

And, Amazon provides technical support for self publishers!!

Oh... and distribution. I knew I missed something.

And as far as distribution goes, I've heard author's tales about their books never making it to stores... and certainly I know it's true because of all the many times I go into a book store looking for something I *know* just came out and never find it. And if you look a week or two later (only a little bit of hyperbole there) they've sent the books back as remainders.

Amazon always has the books you want to buy. B&N will offer to order them for you, but at that point, why not just order from Amazon? You've already lost whatever fun benefit of going to the physical book store.

Vox (from the article linked in the comments) talks about what alternatives the big publishers might have but won't do. They're "stuck" with Amazon for distribution pretty much by choice. They want to keep doing things the old way, reporting book sales and paying royalties the old way, polishing the window glass on their NY offices highrise offices the old way...