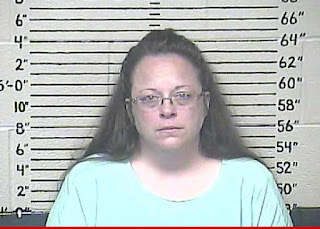 There is that word again. Secretly.

According to Breibart News of course. It must have just been a mistake by the person writing the blog post.  You know it was a private meeting that they didn't want anyone to know at the time it happened. They were just confused because the Pope publicized his support for the embattled Kentucky Court Clerk. He did mention his support of "people of conscience" in a press conference but didn't see fit to mention that he met with Davis and prayed with her.

The full story is told in an obscure website called "Inside the Vatican." Sort of like Sports Center for religious types.

A quote from the story:


Kim Davis gave me this account of the meeting shortly after it took place.
“The Pope spoke in English,” she told me. “There was no interpreter. ‘Thank you for your courage,’ Pope Francis said to me. I said, ‘Thank you, Holy Father.’ I had asked a monsignor earlier what was the proper way to greet the Pope, and whether it would be appropriate for me to embrace him, and I had been told it would be okay to hug him. So I hugged him, and he hugged me back. It was an extraordinary moment. ‘Stay strong,’ he said to me. Then he gave me a rosary as a gift, and he gave one also to my husband, Joe. I broke into tears. I was deeply moved.
“Then he said to me, ‘Please pray for me.’ And I said to him, ‘Please pray for me also, Holy Father.’ And he assured me that he would pray for me.”
Joe told Kim that he would give his rosary to her mother, who is a Catholic. And Kim then said that she would give her rosary to her father, who is also a Catholic.
Vatican sources have confirmed to me that this meeting did occur; the occurrence of this meeting is not in doubt.
Those who have seen the images of the film of the Pope answering the questions of the journalists on the airplane, on the matter of individual conscience, his determination and passion, are persuaded that he had in mind not a theoretical issue of conscience, but a specific person, someone he had met and embraced — someone whose burden, as a loving pastor, he had taken on his own shoulders.
He was thinking of this person when he answered those questions.''
My question is why did this have to be a "secret." Why is it that Pope Francis is happy to be seen with Barack Obama, Fidel Castro and Mo Rocca. But the Little Sisters of the Poor and Kim Davis have to be kept in the "closet." That meeting with them have to be secret and leaked out to the press like they are something to be ashamed of or something.
It is passing strange to say the least.
Posted by Trooper York at 9:00 AM

Labels: Pope Francis, Things are exactly as they seem

Personal Secretary: Holy Father, the schedule includes a meeting with that fool clerk who actually went to prison for her belief.

Pope: Another true believer - sighs - well, I suppose I must make a nod in that direction from time to time.

Personal Secretary: I'll do my best to downplay it.

Pope: Good. Much more of this and I'll be a laughing stock in the Vatican. They might even start calling me a Christer!

Even the pope isn't immune to optics. If a pope ignored optics, he wouldn't be a leftist like this one is.


The reaction to this secret meeting has been amazing. Imagine if he met with her in public. If he gave her the same consideration he gave Fidel Castro. Imagine.....nah it ain't gonna happen.

I think both the Pope and Kim Davis look good in this encounter. I can see why the Pope doesn't want to go all in with her. She's, to date, a sympathetic figure, but there's a possibility she's doing it for the publicity high and God knows what her ex husband will say about her. And you can bet that the press will question her ex husband extensively. They really hit pay dirt with Josh Duggar and their appetite is whetted..

This Pope is cray. Looks like a cowardly move from my view.

Darcy right, if you think it is okay to meet with her, why do it secretly?

Whatever. Let him be a hero of the pro-abortion, pro-marry whatever and whomever you like crowd. And the socialists. I'll stick with my faith, which is in Jesus and the word of God.