One last Pope post and I will shut up! 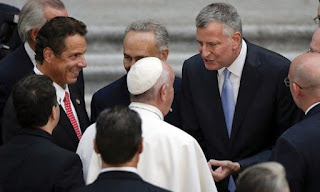 The Prefect Storm!
Posted by Trooper York at 7:11 PM

Labels: I don't want to make anyone cry, whats the use

Four Marxists all gathered together in one spot. Where is a sidewinder or a hellfire when you need it. The only thing missing was POTUS.

His Holiness needs to hang out with a better crowd.

I bet all of those guys are dropping a fin in the collection basket on Sunday.

Yeah no doubt about it.

By the way, I forgot to mention my utter happiness at hearing the useless Orange Cry Baby Oompa Loompa retiring from SotH and his congressional seat at the end of October. So long you spineless, weak-kneed, retarded alcoholic. My wish came true, McConnel is next. Turtle soup coming right up.

OK, sure, but there's no need to pick on us retarded alcoholics on a Friday for Christ's sake. Is nothing holy?

All I see are knaves. Where's Boehner?

There will be a special place in hell for DeBlasio.

There was a gif circulating of pope walking along a path of people outreaching to touch his robe. Just like Jesus. That incident, long remembered, that occurred when Jarius fell at the master's feet at the front of a throng gathered at the side of the lake begging Jesus to heal his dying daughter. A large crowd pressed around him as they hastened through a narrow street to home of Jarius. This is moment arrested in time packed to bursting with conflicted interests.

The woman believed with her entire being if she could just touch the hem of the master's garment then she would be healed of a dreadful affliction.

Veronica of Caesarea Philippi. Look it up! Check if you like.

Jesus felt life energy drawn out of him. He stopped right there in tight street. He knows it is her faith in him that allows his healing energy to work. He is impressed with her faith. It is truly remarkable. And pathetic. He wants the crowd crushing in to all know her faith in Him is enough to heal her that she needn't actually touch him, that is just the superstitious element of her faith while he does not want to honor her method of taking his energy like she did he does want to acknowledge to her and to the crowd the strength of her faith.

Jarius thinking now, putting this together with the woman's demonstration of real faith, with its devious element but real, with his own flimsy faith, knows his faith to be wanting. Being told "don't be afraid, just believe," and understanding his daughter's life depends on his faith tears him apart because he knows he is inadequate, he know that doesn't have enough faith. Or any. Jarius cried, "Master, help me with my belief!"

And now these people are doing the same thing with a pope. A regular guy. They put all their faith in him. That gif I mentioned shows the pope's body guards abruptly shoving people's arms back, they're pathetically reaching and groping for a touch of the pope's robe, and those body guards are sooooo over it. They nearly break their arms setting them back in place behind the rope line. Pathetic. The glass of water thing is pathetic. Taking the glass to his office is doubly pathetic, and sharing the water with his staff is triply disgustingly pathetic. And Jesus said a long time ago, "KNOCK IT OFF WITH THE TOUCHING ALREADY."

Another thing, oh man, this was funny as H-E-double popesticks.

Bishops are walking away in a line. And next to them bishops are coming toward the camera in a line and abruptly turning right, (our left), they rise steps keeping their line. They're all wearing bishop hats and I mean they are looking tan tan tan tanto muy ridículo. Like chess pieces except only the bishops, a whole shop full of bishop-only chess pieces, lined up excellently, not martially, not precisely, rather organized as self-organized higher spirits self-organize along concourses of celestial intelligences to witness some matter of importance to spiritual governance. I imagine. But nothing at all military, still all those hats bouncing along in rows looking for all the world like a moving mise en scène of chess pieces trapped in a shifting Escher drawing.

I would climb a tree to be part of a story as good as the touching one ChipA tells above.

LOL! Methadras beat me to it! Was the VERY FIRST thing that came to mind when I viewed that photo! Great minds, etc.... :)