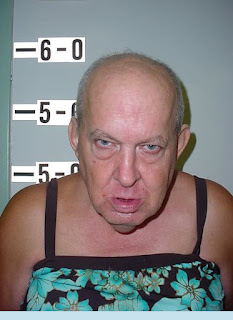 New York Daily News, September 26, 2015
Police say a Wisconsin man beheaded his mother with a four-foot blade before confessing to the killing but saying, "she's not my real mother."
Matthew Skalitzky, 60, had just finished breakfast with his parents late Friday morning when his roommate reported hearing screaming coming from his bedroom, according to a search warrant obtained by Madison Newspapers.
When he rushed up the stairs and to his room, he told Sun Prairie police he saw 88-year-old Jane Skalitzky's body lying separately from her head.
The mother and son had only just arrived after an overnight stay at his parents,' he said.
Jane, who offered to drive her son home, was described by Matthew's roommate as "being friendly and greeting him" while Matthew seemed "distant and unemotional."
Moments after they went upstairs, his roommate said he heard stomping noises followed by Jane screaming "no, no, no."

When police arrived they found the bloody sword on the porch and Matthew coming down the stairs inside.After making the grisly discovery, he said he led Matthew downstairs and to a couch, "like a child," and then went outside to call 911.
When he was asked if his mother was dead, he allegedly replied: "Yes, but she's not my real mother. She voted for Walker. She couldn't be my mother."
Matthew's father said his son recently stopped taking his medication after reading "negative comments" about the drugs on-line. He reportedly spent most of his time on-line posting comments at websites under the name Garage Mahal where spouts liberal rhetoric supplied by the Democratic National Committee. He started back on the drug just two days before the attack.
His son was arrested without incident and taken to a mental health facility.
Posted by Trooper York at 4:53 PM

Labels: things aren't always what they seem, this is not true so don't get your panties in a twist.

"His son was arrested without incident and taken to a mental health facility."

Nice touch on the Garage Mahal. I would have believed it if I wasn't laughing so fucking hard.

LOL This is as good as some of your classic Watership Down stuff.

Let's please not give garage a tag.

That was one of your best. Damn.