or lose his job. 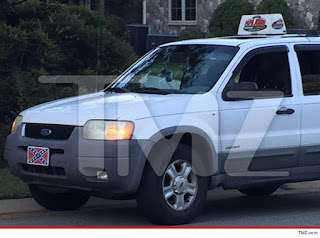 We're told the driver, who works at a location in North Carolina, is infamous around town for the plates and locals have been very upset. We're told customers have even taken to Yelp to voice their complaints.

Things got so serious, we're told corporate got involved, and the employee was forced to remove the plates.

A rep for Papa John's tells TMZ, "we do not condone these types of actions -- we have taken quick and decisive disciplinary action against the team member involved." At this point, the pizza joint says the guy still has his job.

Didn't a great great American say, "Can't we all get along?"

Must be a college town.

Some protesters used to wave Viet Cong flags during the anti war demonstrations. On one occasion, a cop pulled it down. That was considered a horrendous breach of the First Amendment according to Gore Vidal in a documentary about him that I recently watched........I don't even know what the Confederate flag represents anymore, but it's less objectionable than the ISIS flag or the Viet Cong flag. I think the driver should have the same First Amendment rights as the Viet Cong flag waver. And, of course, the people who claim he's a jerk should also have the right to say so......It would probably be a good idea to take an ISIS flag waver into custody, however. The first amendment is not an absolute.