Pride of the Yankees 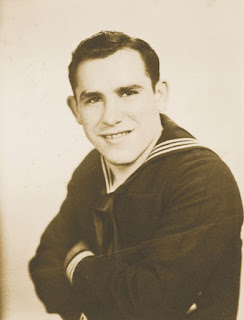 Yogi Berra has passed. He was a true Yankee. He was a true blue American. Served in World War 2 in the Navy. At D Day he was a gunners mate on a landing craft. A great ball player. A tremendous coach. A manager who took both the Yankees and the Mets to World Series. A man of the up-most integrity. When George fired him at the beginning of the 1985 season after only the 16th game of the season he refused to have anything to do with the Yankees for 15 years. But he was a big enough guy to forgive and come back to fold. To accept the mantle of "Greatest Living Yankee" after Joe D passed. 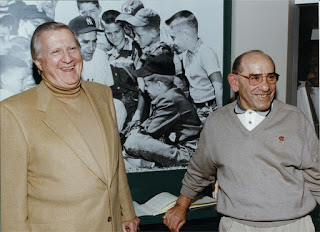 There is talk of assimilation in the air these days. Yogi was the epitome of that. He was the first generation and still spoke Italian to his parents. He became an American without reservation. He became a icon of baseball which is the American game. He would come to the Stadium and was honored by everyone as a living monument of the game. Every Old Timers game he would impart his wisdom to the new Yankees. Who would be lucky to a fraction of his career. 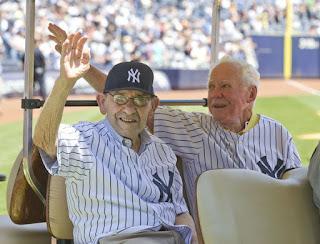 Farewell Sweet Prince. You were the epitome of class and a True Yankee. We won't see you're like anytime soon.

Even those of us who couldn't stand the Yankees (especially when the Dodgers were in Brooklyn), called Yog one of our own.

The greatest catcher in the history of the game, without argument.

A genuinely beloved player and man.

New York baseball in the '50's: Yogi and the Micky Mantle Yankees; Campy and the Hodges/Snider/Furillo Dodgers; the Say Hey Kid in the Polo Grounds. I had no idea I was witness to the greatest concentration of baseball talent in one place ever.

He will never be forgotten.

Bad year for the Astros. First the loss of Milo Hamilton. Now the loss of Yogi Berra. Next the collapse of their pennant race. These things always happen in 3s.

Limbaugh had a nice story on his show today about meeting Yogi for the first time.

RIP Yogi. I think I may have a Yoo-Hoo. Do I have any stored in my fall out shelter for the end times?

BTW Troop, you are only in Brooklyn because a hipster dude like this makes it possible for you to live in Brooklyn...
http://dailycaller.com/2015/09/23/unhinged-jogger-blames-stroller-collision-on-white-privilege-video/

Yogi's time with the Yankees bridged the careers of both Joe DiMaggio and Mickey Mantle. Both Joe and Mickey were great in a resplendent, glorious way. They were Achilles, but Yogi was Ulysses--the one who made it home.......Greatness can drive you crazy. Joe wore the mantle better than Mickey, but all those expectations and fans can undermine your sense of reality. Yogi seemed totally grounded. He was home plate, not center field......Both Yogi and Joe had an eighth grade education. Joe was self conscious about reading comic books. He used to send his roommate out to buy the comic books for him. Yogi didn't need a middle man to buy his comic books and was not self conscious about enjoying them. Yogi knew who he was.......Yogi validated the life and morals of a working man. He showed up fior the war, stayed married to the same woman, and pursued his career without swagger. He won all the golden prizes, and not just the baseball ones.