She must be bleeding from somewhere? 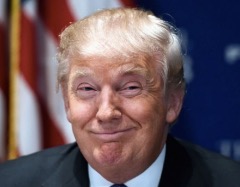 The Donald is fighting with Fox News again. After the Bill O'Reilly show canceled his appearance the pompous blow hard decided he would not appear on Fox. Trump that is not O'Reilly. The big brains at Fox decided that the best way to make nice was to have one of their commentators say that "Carly Farina cut off Trump's balls." The Donald is full of faux outrage and talking about the FCC. It is almost as if someone talked about his face.
Anyhoo he spent the day yapping on CNN and MSNBC and FOX surrendered faster than Mitch the Bitch McConnell. There is going to be a sit down with Trump and Roger Ailes to see if they can come to a meeting of the minds. FOX will buckle. They want the ratings. Which The Donald brings in spades. So to speak.

Trump has provided one great service to the nation. He has exposed FOX and many of the conservative elite media as minions of the Welfare State. If Boehner and McConnell are the tax collectors for the Welfare State these mugs are the mouthpieces for them. The right side of the Octopus. The mirror image of Chrissy Tingle and Rachel Maddow who can't think outside of the box.
Posted by Trooper York at 8:15 PM

Labels: 2016 presidential election, Fox News, not a dimes worth of difference between them

We know O'Really has been played by the Left for years, but Ailes' money must be phenomenal.

Fuck O'Reilly, he can't stand the fact that another guy and out-blowhard him.

I assume Killing Trump by the O'Reilly "team" is in the galleys.

2015: The year that looks, menstruation and testicles returned to the political lexicon - a logical progression from pants, creases, and binders of women. You can't deny it's a step toward equality, honesty, and candor. Progress.

Lowry is obsessed with Trump's balls. I hope its due to Golf.

Fuck O'Reilly, he can't stand the fact that another guy and out-blowhard him.
O'Reilly and Trump are buds. I think it was last summer that I was watching a Yankees game on the tube and they showed Trump and O'Reilly sitting together in the stands.
Yes, the whole Trump episode has shown me that Fox, at best, is the face of the GOPe. Mark Steyn made the comment that Fox has become the network of old men saying "you can't do that".