"Pentagon promotes 'Lean In' groups to boost women in leadership"


"If you look at the numbers, it's clear that we are not where we should be in terms of the leadership reflecting the overall force," said the official. "It's important that our force reflect the nation that it protects."

Women make up about 15 percent of the U.S. military, and thousands of women have served alongside men in Iraq and Afghanistan. But women also leave military service during the mid-career phase at twice the rate of men, and top military officials are seeking ways to retain them.

The caption to the picture below reads... "I'm a single woman in the early thirties, who doesn't want children. Yesterday, I accepted my future."  Could she have made a fantastic general? 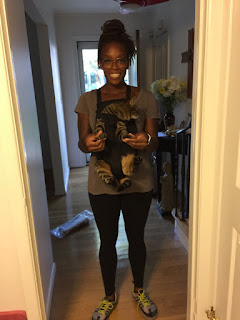 "Could she have made a fantastic general?"

And everybody knows the answer is no.

But when totalitarian PC rules no one dares call bullshit.

I heard numbers and race and sex and (in that world) class distinctions. I heard critical race theory pervading armed services.

The answer, of course, is no. Meaning in your post-modern Obama world of reversing logic, in the white world George Costanza decision making, that means yes, yes, yes, of course, yes, you silly doofus, yes, and while at reversing culture much as possible make sure the Army become outreach for Islamic sensitivity awareness. Ah. Beat me to it. Cynicism fail.

Maybe that was a novel.

Maybe that was real.

Maybe the real knowledge is made up like the novels.

Whatever. It's good. He moved the whole capital away from Thebes to Amarna. A hell-hole cut out of nowhere for all the wrong reasons chief among them break the stranglehold the temples had over society. A physical pharaonic break with the temples and religious powers of which he is so much a part. His intention was choke them to death. Cut them off from all power and part of their income streams.

Then squandered the nations treasures on his friends and supporters at his new capital. He'd stand on the balcony and toss gold to the crowd, all courtiers and his new temple priests for his new religion, his commanders who follow his directions, the real generals and soldiers already long gone mostly out of disgust.

You see these necklaces in museums. Gold coins like Necco wafers strung on heavy braided twine and there are seven of these loops. They look like they weigh a ton of gold and the award is for something outstanding, a military general for an outstanding victory representing tens of thousands of enemies killed, but not now. The new king lavishes praise on the most butt-kissing characters, whomever the king personally liked, in his pinched view those who served HIM best, HE being the nation. Real men and women of service went unrecognized and the nation's prospects shrank during his reign.

During the reign of Solomon the kingdom of Israel was at it height of historic glory. His son, Rehoboam, was a bully and not a manager. He created a destructive rift that resulted in the kingdom being divided between he and his brother Jeroboam who took the ten northern tribes leaving Judah and Simeon to Rehoboam.

Anyone alive during that period involved with events would be bummed out.

The name Rehoboam (mnemonic: re-hobo-am) means "widen" in names, "he who widens" the contrast with reality too steep to bear for people actually living it.

This is the point made in the "the Book of J" that also postulates so very much of it made up, and made up out of deep cynicism to actual events in this country within this miserable court at this time.

"Oh Rehoboam, how great thou art, how expansive, how growing in stature and glory!"

I forgot, Link about Rehoboam's name meaning "wide." In case you're on Mercury or somewhere out there and interested, I mean, come on, who wouldn't be, huh?

This shit's happened before.

whispers, "yeah, and it never turns out well."

This was tried when Willie was in.

Hillary was all over such stuff.

If you want to know what a Hillary Administration would look like, this is it.

Nothing says diversity like a quota fill-the-slot-with-minority-people in military leadership roles. Leftist and Marxists will never stop until they have completely canvassed the entirety of the collective American culture with their repugnant ideas. You will have to start killing them for them to get the message.

And yes, I am advocating killing these people who have systematically foisted this garbage onto us. Rebuke, censure, and denounce me at your leisure, but you know I'm right. There is no other way.

It's about having babies mid-career.

Lots of places you can't PCS with your cats, either.