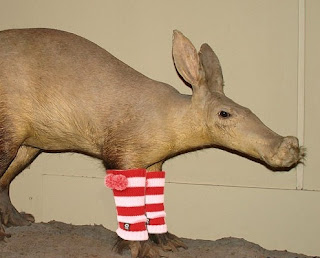 A thirteen year old marsupial was murdered by her father today for going to school wearing sexy stockings. Claiming that his family was dishonored by the red and white stripped leggings Mohamed bar Mohamed cut off his daughters head at the intersection of Atlantic and Flatbush Avenues at the front door of the new Barclay's Center.

Shouting "Allah Aardvark" the rigidly religious devout Muslim cut off his daughters head and delayed the Billy Joel Concert for several minutes. They had to start close to on time because Billy Joel is not getting any younger and they didn't want to issue refunds if he had a stroke before the show.

"I thought I would not have a problem as I had her clitoris clipped but she turned into an infidel whore." Currently in police custody the irate father will be released with a desk appearance ticket before the day is over.

When reached for comment Mayor Bill De Blasio said "Although this concerned father might have overreacted we must remember that the real problem is Country Clerks who refuse to issue marriage licenses. They must be incarcerated until they follow the law."
Posted by Trooper York at 7:12 PM

Labels: Things are exactly as they seem

How did Billy Joel get caught up in this stramash? That felt gratuitous and hurtful. Billy's just a Piano Man not living here in Allentown in a New York State of Mind with an Uptown Girl. When I lived on the east coast back in the 80s you could not get away from Billy Joel music. Nor Springsteen. Somehow the Billy Joel music still calls up a good memory whereas the Springsteen stuff makes me gag.

Billy is a secret Muslim.

Billy de Blasio is not a secret Muslim, he is an open unabashed Communist fucknut...he focused on the "Red" in Red Sox (sorry Lem and to that Marine Corp patriot Ted Williams, God bless his frozen head).

Say what you want to, but he was banging Christie Brinkley from 1985 to 1994, and I consider that success.

The thing about Marsupials is that, contrary to all the happy talk, they never turn into Teddy Bears.

Yessir he was Arafat's baby
Yessir I don't mean maybe
Yessir Billy was his baby doll!

Allah's at the bar. Fleas be up on him.

Christie Brinkley is reportedly with John "Stop-calling-me-Cougar" Mellencamp. There's hope for all of us.

Yeah, if you're a fake rock star you've got a chance with Christie Brinkley.
Yay.