It is very difficult when you don't believe in your leader. 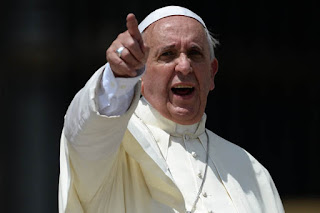 It is extremely difficult when you have a leader you do not believe in. You want to be loyal but you know that he is mistaken and going down the wrong path. So you speak out in protest. You say"this is not who we are." You plead with him to fight for the causes that you have always believed in. That he speak up forthrightly and clearly and not kowtow to the likes of Obama to garner good notices in the media. You will lose friends who can't believe that you would dare question your leader no matter how far astray he might lead you. You are told that you shouldn't dare speak out. That legitimate criticism is "bashing" and beyond the pale. You protest that we should not abandon the fight for the right to life or other core issues to engage in global warming nonsense. You plead with him to fight the good fight vocally and vehemently. To not surrender and acquiesce by tailoring his message to a more palatable version of namby pamby safe speak.

But don't worry. I have very good news.

So we don't have to worry about that anymore.
Posted by Trooper York at 12:08 PM

Boehner might be retiring but who the fuck will take his place? I hope it isn't worse.

Well the Speaker doesn't even have to be a member of the House.

Maybe they can elect Whoopie Goldberg or Rosie O'Donnell or somebody like that there.

One thing that I admire about the Right of the political spectrum is their markedly better nature in avoiding false idols, to judge leaders as just people with an important job - as fallible as the rest of us - and for understanding the importance of pointing it out and fighting against their choice of the wrong path when they choose it. It's honesty, and truth. It's love of principle above feel good veneration of a person with weakness and limitation like all of us. We all make mistakes, some are big ones, and sometimes a person turns out be nothing like you thought they were, or they change from what you once could rely on. It's just being human, and it's foolish to think them above it. That false confidence in a leader has ushered in some terrible consequences in history, and I think much more so than when it ever helped, if it ever did.

I e-mailed my thanks to Rep. Meadows (my Congressman) for highlighting what a disaster this Speaker has been. I'm still not sure that the GOP has realized that conservatives don't necessarily want them to lead the conservative cause. Until they do, expect other cowards to assume key leadership positions.

This is how the Lefties get their way.

No prisoners, no mercy.

I'm pretty mad about politics and government. Why?

1) Environmental inspector comes and inspects our operation nitpicking every little detail of paperwork, training, equipment, materials, etc. Very thorough. We try to point out that although we don't release any pollutants and are conscientious, as he can plainly see, our next door neighbor is washing off heavy equipment everyday and washing the oil and contaminants down the gutter to an open channel. He doesn't even want to see it, but do we have 30 separate forms filled out correctly. Because if not, we will be fined.

2) Our Workers Comp is going through the roof this year, again. We don't have many injuries and none serious, but often when we fire someone, or lay them off, or even when they quit, they soon find a lawyer off an add on TV or the back of a bus and sue us for some imaginary injury that never appeared when they worked here. CA Workers Comp is set up to make their story always increase your insurance cost even if they never prove an injury, which they rarely do. Some WC insurance companies love our account, because they can charge us up the ass on claims, and then never have to pay out actual losses down the line. It still costs us double or more what it would cost in nearby Nevada.

3) Health insurance costs have been on a tear under Obamacare - despite what every lefty pundit keeps telling us. My agent told us yesterday that our rates will go up between 47 - 93% for 2016. We offer great health insurance with no deductibles, but unless we avoid that increase somehow, that benefit will be gone for my people. Thanks Democrat voters - you stupid shits.

So yea, I'm angry, and although it will return, it won't last today, because:

I am not leaving the faith. Popes come and Popes go. The Church endures.

That doesn't mean you don't speak out. It was not speaking out that lead to the homosexual pedophile scandals in the Church.

Hello? Nancy Pelosi is still the leader of the House, until the Republicans prove otherwise.

I turned on catholic radio station while driving to work and some guy called up and said all the criticism of the Pope was coming from Catholic converts! The life-time Catholics - the "real" Catholics loved him. Its only those crazy, hard line, former Protestants, who didn't like the Pope. He talked about the converts in a rather sneering way.

When you over the target is when you get a lot of flack.

I have told to sit down and shut and to listen to my betters many times. Starting with the Nuns in Sacred Hearts Saint Stephens grammar school.

I not so good at that.