This is what Cardinal Sarah was talking about! 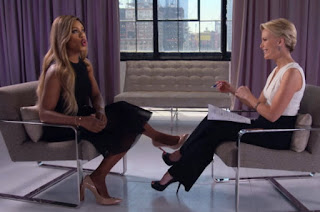 
Upon leaving the store, Belcher called police to have the security guard arrested. D.C. police confirmed to NBC4 Washington that the woman was arrested and charged with simple assault.
Belcher told NBC4 that the security guard told him: “You guys cannot keep coming in here and using our women’s restroom. They did not pass the law yet.”He told WJLA that he believed “the woman had no reason to put her hands on me,” adding that he was emotionally traumatized by the incident. “I’m hurt by this. It’s terrible… I’m distraught,” he said. “People should not be discriminated based on their gender identity.”
At least one woman was grateful for the security guard’s actions. Shopper Deana Chisholm told WJLA: “If you was born a man go to the men’s bathroom. You got a penis go to the men’s bathroom. If you are born a woman go to the woman’s bathroom. Period!”
Posted by Trooper York at 4:42 PM

Labels: C you next Thursday Megyn Kelly, Fox has jumped the shark, translation

Welp....here is my position on this.

If you identify as a woman and have committed yourself to the idea to the extent that you have had your dick and balls lopped off.....then you can use the ladies room. ONLY then.

See. I admire dedication and follow through. Until you have removed your dick and balls, you are just playing dress up and pretending.

this is similar to the SF trooper that was going to be thrown out of the Army for saving an Afghan boy from being raped.

Our First Lesbian President will certainly not be missed.

There is no evidence that Bam ever had sex with a woman, so "lesbian" is perhaps an exaggeration.

As for the perp in this story - Ebony Belcher - I can see the cause of his problem a mile away.

Apparently Americans will never connect the dots and will continue voting Democrat in great numbers. Not that the Republicans are anything to write home about but they have scant interest in "pushing the envelope." Next up on the Dem agenda? Mainstreaming pedophilia.

I guess those women are H8ers if they can't let some strange man watch them defecate and pee.

The next market crash, or even the Democrat convention, may show a hole in that hypothesis.

ricpic said "Next up on the Dem agenda? Mainstreaming pedophilia."

Yeah, I've noticed signs of this, increased chatter in the media. (Side note: Ironic that increased chatter was one of the signs of imminent terrorism that we failed to recognize before 9/11.) Looks like the perverts are going for it. It'll be King Putt's last big nation-changing, ocean-rolling-back, transformational push. First, there will be tv shows and movies themed about "understanding" pervs. There'll be mandatory pervert-friendly literature distributed to first-graders. Experts will opine that it's not so bad, really. Haters will be enjoined from forcing their unnatural anti-sex bigotry onto pre-teens. Puttsy Von Strawman will roll out one of his thrilling speeches. ("There are some who say that sex is BAD ....")

Nothing will actually happen legislatively. I doubt there will even be an executive order. Maybe an agency directive or just some scolding from the Schoolmarm in Chief. It'll be just enough to get the issue out there as discussable, with the usual softheads saying maybe we would be better off understanding the pervs instead of always locking them up. Voila, live issue.

Of course, after people see their 5 year old molested, the tide will turn rapidly.

The co-ed bathroom thing is already encountering a big backlash. NAMBLA ("sex before 8 or else it's too late") on every corner should put a stake in it.

OT, but it also is part and parcel with the Agenda (another post, really).

Having had their heads handed to them on the Trump-molests-women thing, the Gray Lady proves its heart is still with the VC.

I've never known a transsexual. How can you act in a bigoted way against people you never interact with?......I think if you take a carefully thought out position on an issue like this, you've got too much free time.

Megyn Kelly looked and acted gross in that segment. I stopped watching it after the Trump interview, less than minute in.

but but but, gender fluidity matters.

I've never known a transsexual. How can you act in a bigoted way against people you never interact with?.

There are a lot of people that I don't interact with. This doesn't mean that I can't have a preference to NOT have them sit next to me and watch me while I shit and piss or change my tampons. (Graphic enough for you?) Nothing bigoted about it. I don't even want my husband of over 20years in the same room while I'm doing my duty. He feels the same. We are intimate, but not that intimate. Somethings are just better left unseen and unspoken :-)

Why should I allow strange men to invade my privacy in a public place when it is not done in the privacy of my own home. Even strange men who are dressed up as women.

And I have interacted with transsexuals. As clients in my financial practice and as acquaintances and friends in social situations. Just like anyone, they are all sorts of people. Some nice, well adjusted and some just fruitcakes who need some serious help.

That is exactly right DBQ. There are all kinds of people. But facts are facts. Just as we said that same sex marriage would lead to unintended consequences like bakers being fined out of existence and elected official are incarcerated because of their religious beliefs. With transgender rights trumping common sense there will be perverts and molesters you will get access to victims by posing as transponders. It is just a fact. You know that is going to happen.

So why should we sign on to a politically correct agenda.

I've never known a transsexual. How can you act in a bigoted way against people you never interact with?......I think if you take a carefully thought out position on an issue like this, you've got too much free time.

Neither have I, but the idea that someone wants to flip their gender based on feelings is not at issue here. The issue is that the citizenry is being forced to accept such a condition on the presumption that it has equal merit because that person feels this particular way. It isn't bigoted to question and also reject such a notion on it's face. Just because someone chooses not to interact or reject someone for anything doesn't qualify as bigotry, so please stop thinking that it is. It's intellectually dishonest.

We as citizens are being asked to make certain accommodations for such a tiny minority of people not on the basis of any racial quality, but one based on gender fluidity, on feelings and whether you believe they were born that way or not is irrelevant and what makes it worse is that government is promoting this nonsense on a daily basis as a weapon against everyone else to conform or pay the consequences.

It used to be that these people didn't want government to be involved in their private matters, but it looks like that was a blatant lie. Instead they want government to provide a protected class status to their decisions instead, extra rights if you will. Above and beyond that of any other citizen.