The guy who should have been Pope speaks out! Finally somebody who knows what he is talking about! 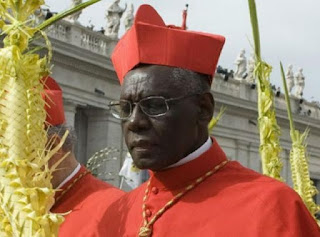 In a scathing address at a prayer breakfast in Washington D.C. this week, a high-ranking Vatican cardinal has denounced an “insidious war” against Christians taking place in the United States under the guise of tolerance.

While other countries face “merciless beheadings,” “bombings of churches” and “torching of orphanages,” in the United States Christians face an “equally damaging, yet more hidden” form of religious persecution, warned Cardinal Robert Sarah, the African prelate serving as the prefect of the Vatican Congregation for Divine Worship.
Sarah (whose name is pronounced Sar-AH and not like the English girl’s name) said that in America, “political leaders, lobby groups and mass media seek to neutralize and depersonalize the conscience of Christians so as to dissolve them in a fluid society without religion and without God.”
By doing this, he said, they are carrying out “the will of the Evil One.”


In delivering his keynote address at the annual National Catholic Prayer Breakfast held in Washington D.C. on Tuesday, the forthright Guinean cardinal—considered by many to be a possible future successor to Pope Francis—pulled no punches in decrying what he called an “insidious war in this great nation of the United States.”
“In the name of ‘tolerance,’” he said, “the Church’s teachings on marriage, sexuality and the human person are dismantled.” As examples of this attack, the cardinal mentioned the “legalization of same-sex marriage, the obligation to accept contraception within health care programs, and even ‘bathroom bills’ that allow men to use the women’s restrooms and locker rooms.”
Sarah said that in our day “we are witnessing the next stage – and the consummation – of the efforts to build a utopian paradise on earth without God.” In this brave, new world, “all manner of immorality is not only accepted and tolerated today in advanced societies, but even promoted as a social good.”
“The result is hostility to Christians, and, increasingly, religious persecution,” he said.
Before a crowd of more than 1,000 people, including numerous Catholic bishops and members of Congress, the Cardinal recalled America’s glorious founding and lamented how far the country had fallen from its original ideals.
“God is named in your founding documents as ‘Creator’ and ‘Supreme Judge’ over individuals and government. The human person endowed with God-given and therefore inalienable rights to ‘life, liberty, and the pursuit of happiness,’” he added.
Now, in your nation, “God is being eroded, eclipsed, liquidated,” he said.


“How low we are sinking for a nation built on a set of moral claims about God, the human person, the meaning of life, and the purpose of society, given by America’s first settlers and founders!” he said.
Posted by Trooper York at 3:03 PM

Finally, somebody who allies Leftism being in the service of Satan. We haven't heard anything like that since John Paul II.

And he had to shout over the Revolution Theology crowd.

He also nails what a crock "tolerance" is. Throw in diversity, compassion, and multi-culturalism and you've got something going.

While many Christians across the world are suffering from violence due to persecution from governments or groups like Islamic State, “ violence against Christians is not just physical, it is also political, ideological and cultural,” the cardinal said.

“This form of religious persecution is equally damaging, yet more hidden. It does not destroy physically but spiritually.” The 'violence' of cultural and ideological pressure seeks to separate the Christian from his or her conscience and blend them into society.

So true. I know professed Christians who believe killing the unborn is right with God. Not only do they believe it, but their churches do, too. I can not for the life of me reconcile that position with Christ's message.

They may profess it, like Pelosi Galore and Halo Joe, but they're committing the sin of bearing false witness.

And their "churches" are only doing it to keep from losing parishioners. Which seems to be happening because of it.

I was thinking of some Protestants I know who belong to churches that have pro-choice and gay pride events. They are celebrating those positions as part of their Christian identity and to recruit new members. Pelosi and Biden are bad Catholics, but the Catholic Church hasn't formally embraced abortion as a God-given right the way some Protestant churches have.

I was praying that someone like Cardinal Sarah would be the next Pope. But unfortunately it was not to be.

Instead we got the Bernie Sanders model.

"According to legend, exactly 33 years (span of our Lord’s life) to the day prior to the great Miracle of the Sun in Fatima, that is, on October 13, 1884, Pope Leo XIII had a remarkable vision. When the aged Pontiff had finished celebrating Mass in his private Vatican Chapel, attended by a few Cardinals and members of the Vatican staff, he suddenly stopped at the foot of the altar. He stood there for about 10 minutes, as if in a trance, his face ashen white. Then, going immediately from the Chapel to his office, he composed the prayer to St. Michael, with instructions it be said after all Low Masses everywhere. When asked what had happened, he explained that, as he was about to leave the foot of the altar, he suddenly heard voices – two voices, one kind and gentle, the other guttural and harsh. They seemed to come from near the tabernacle. As he listened, he heard the following conversation:

The guttural voice, the voice of Satan in his pride, boasted to Our Lord: “I can destroy your Church.”

The gentle voice of Our Lord: “You can? Then go ahead and do so.”

Satan: “To do so, I need more time and more power.”

Our Lord: “How much time? How much power?”

Satan: “75 to 100 years, and a greater power over those who will give themselves over to my service.”

Our Lord: “You have the time, you will have the power. Do with them what you will.”"

The above was taken from this excellent essay. It may be of interest to those who are Catholic, maybe not to others. Your call.

Interesting article, Michael Haz. I've been reading a commentary on the Book of Revelation. Revelation mentions a time when there will be two witnesses who bring Christ to the entire world, then the world will kill the two witnesses and rejoice at their deaths, then the Beast will be released from the abyss to rule the world. I believe we are living in the time of the Beast. I think the two witnesses were the Roman Church and the Orthodox Church, which over the past couple of hundred years have lost their influence. Didn't Time or Newsweek once run a cover that proclaimed "God is Dead"? Revelation also says that once the Beast is released to rule the world, evil will occur at an accelerated pace. It's hard not to look back on the past century with its Holocaust and Great Leap Forwards and Stalin's purges, abortion normalization, disintegration of the family, sexual revolution and confusion without seeing evil running unchecked and faster than ever before in the history of the world. I fear it will get much worse before it gets better. All we can do is try to live good and true lives and help others do the same.

Sydney, I agree. Over the last few years I've come to realize that the fight between good and evil, the fight against Satan has grown larger and more urgent.

(People offended by this should skip to the next comment).

I've chosen the side of the fight I am on. That meant giving up some things, but it is worth it. Evil is being forced onto us by government, by society, by popular culture, and by belief systems that place high virtue in brutal behavior.

In my long-ago childhood, people spoke from the pulpit, classroom, and dinner table about sin. Not so much anymore, eight because it has been driven out of school, because more and more families ignore it, or because weak pastors don't want to drive away their flock.

There is most definitely evil in the world. And we have a duty to resist it.