You and I will always be back then

Use that title as search term and the first result will be this clip of the last episode of the last season of the cartoon Adventure Time.

They go out with a bang. The entire imagined world of Ooo is gloriously destroyed. The writers took all of their work and ruined it for the whole world to see.

A red geometrical solid form with monstrous human aspects enters Ooo from another dimension. It drops out of the sky through a hole. The earlier version of the Ice King's mathematician fiancée who has gone mad is inside its head trying to solve an equation. The red monster releases two separate monsters from its body that change forms as needed to tear up the place. One by one the citizens of Ooo attack the monsters but are beaten back. Everything built up through all of the seasons of the show is destroyed. The writers cut loose depicting the horrors of war. This is not an episode for little children.

Near the end of the destruction, Jake, the elastic yellow dog, returns to the treehouse and shrinks much smaller than usual and curls into fetal position.

BMO, the tiny computer picks up Jake and says, "How about you let me be the papa."

Holding Jake as a baby, BMO sings Jake a song.

It's a catchy tune.

Other creatures emerge and they pick up singing the song.

Their harmonizing affects the rampaging monsters.

All the remaining citizens of Ooo harmonize singing the song and the destruction is stopped and the monsters reversed. The screen turns to black and white and the monsters are blown away to dust and the red geometric form with human aspects departs through the hole in the sky connecting dimensions.

Ooo is destroyed but its citizens are not. They pick up and carry on but Ooo as it was known in the series is gone. They are stripped back to nothing and pick up from there. But at least they're alive. They appear psychologically unharmed faced with the challenge of rebuilding.

The man who voiced Jake, John DiMaggio, also voices the robot Bender on another cartoon, Futurama. It took the voice actors some fifty takes to record this song because John DiMaggio kept crying during recording. They needed his voice and emotionally he couldn't provide it. He says in another interview that he continued crying at home throughout the day. 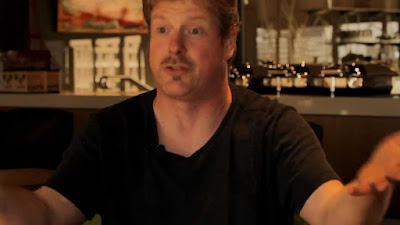 The song made everyone cry (not me, I'm a stud). Fans are especially fond of the sweet little computer BMO.

There is quite a lot more that follows this clip. Fin and the young version of Ice King escape the red geometric monster through a tube that opens by Jake's singing. While the young version of Ice King's betrothed stays behind in the shrinking cube continuing to calculate and is lost. The cartoon is unrelentingly cold-blooded, harsh, and horrible while simultaneously tender, warm-hearted and adorably cute.

Like children setting crayon to blank sheets of paper, the entire thing through its eleven seasons is pure raw imagination. The writer's mindset is "now I will write as a child."

The song doesn't pull my heart strings, though I'm impressed by the amount of emotion it evoked. I'm also impressed with the creativity involved in coming up with this cartoon while holding the belief that there is no such thing as pure, raw, imagination in humans. Adults who write with the mindset of "now I will write as a child" are adults who are writing with an agenda in mind.