That's the cutsie name given by media to a horrible and widespread case of corruption involving access to top tier colleges.

It's the name of a movie with the single similarity being a high school athlete desperate to get into college.

But in the movie, the character is an actual athlete and already gets good grades. He doesn't need corruption to get into college. While in real life the sons and daughters of wealthy are too stupid, too dull, too unambitious, too unchallenged, too privileged, too drunk to get into top schools on their own. They need corruption to help them. Some are so dull they didn't even know their parents went way WAY WAY out of bounds to help them.

Now, how are they expected to perform as genuine athletes once admitted to school?

At the center is an extraordinary businessman with no morals or compunction whatsoever who recognized this need of the wealthy to boost their children beyond their children's own capabilities and matched it by supplying the college sports coaches, the SAT and ACT administrators, the college administrators all corrupted by him. Through profit and non-profit organizations set up by him. 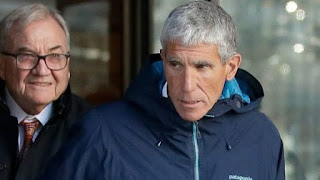 The thin guy in front, not the fat guy in back.
He has that lean and hungry look. The sleek headed man such as sleep a-nights.
He thinks too much. Such men are dangerous.

And that right there is an impressive set of business achievements, tremendous business acumen, corrupting all those people at precise points as required and nothing more, corrupting the demand side as well and then squeezing them for maximum layout, skimming the available market, and all of that put to evil with all participants satisfied, using systems in place, to tremendous profit for each. In strict business terms the new industry is brilliant. While unfortunately amoral and illegal.

The payment for services goes through non-profit so becomes a deductible on taxes. There's the flaw on the IRS side. Funds received by the non-profit go out to corrupt otherwise clean coaches of various sports, admission exam administrators, and college admission officials.

It was the FBI and the IRS that brought him down.

So now we see these two agencies with reputations damaged under Obama administration actually do something worthwhile.

William "Rick"Singer is the man at the center. He set up a for profit organization to assist with admissions and he set up a non-profit to launder bribes to corrupt individuals at various points of college admissions process.

The kids need to have solid admission exam scores so an exam administrator was paid to allow the students more time as physically handicapped students are allowed, or the administrator actually took the test for the dull student.

Now, just like affirmative action, how is that student expected to survive academic rigor once admitted by corrupted means?

Don't worry. They'll slide by. A daughter of a particular actress who didn't know her mother had boosted her chances outrageously told her friends she was heading off to college to party.

William Singer helped the parents of 800 such unconcerned students.


Andrew Lelling, U.S. attorney for the District of Massachusetts, reportedly claimed Singer's clients paid him "anywhere between $200,000 and $6.5 million" for his unique services.

From the parent's point of view, from the school's point of view, how different is this from any other form of college entry privilege? Endow a school generously, the legacy system, affirmative action. This new corruption is not so different from those forms of corruption. Except this one is terribly clever also an ultimate example of amoral business and profitably that links recognized need with supply. Kudos to William Singer for outstanding business, boo on William Singer, now go rot in prison for denying 800+ qualified young people their rightful spots. He put lazy dummkopfs where bright qualified hardworking students should be. He made colleges worse.

The Fox News article is good, more details there.

The AP article has more names of college administrators, coaches, and parents caught up in Singer's scheme.

Justice.gov has the deets on the case and government actions.


Toni graduated from Regis before I did. I helped Toni apply to Harvard by going though all of the GMAT preparation books available.

These are big fat workbooks published by various publishing houses. GMAT is for MBA program, LSAT books are for law programs.

The books contain all one can expect on the entrance exams based on previous actual exams. They're divided into categories.

The GMATs are positively wonderful puzzle books. And I mean it.

We did all kinds of puzzle books for fun, but the GMATs are the best of them all. And they're FAT. We had the best time together doing them one after another.

We made cards for ALL of the vocabulary words.

We did all of the maths.

We did all of the English exercises.

We completed all of the logic challenges.

Then Tony applied to Harvard and she was rejected.

She was a very solid candidate. She had great recommendations and great extracurricular activities.  He own dad was an incredible advisor.

I could ace the GMAT easily. We both did so much practice for it that it wasn't even funny. And we did that for fun. For me, taking the GMAT would be fun.

But I wanted to see the school first.

I had a vacation in Boston so I scheduled an interview with Harvard admissions.

Turns out, it was not a one-on-one interview.

I was one of a small group of similar students.

In my group was a young woman dressed as a business woman fresh from Yale. She was beautiful, but boring. She is the daughter of an executive of a large bank also graduated from Yale. The admissions team showed tremendous interest in her.

In my group was also a young Japanese man also dressed in expensive Italian suit. He did not speak English and he was accompanied by 4 older gentlemen who ushered him around and who's assignment was to get this kid into Harvard at any cost. No problem, these 4 men will get the job done. The Japanese kid looked like a dope. Truly bewildered. Lost at sea. But one day he will be in charge of a large Japanese corporation so it's important he has the right education. That day is probably now. The kid had only one avenue in life. He had no life choices. He is stuck on the path given him. I felt a little bit sorry for him because I have a lot more freedom than he does.

In fact, I have more freedom than the girl from Yale does. She too is stuck by her family's expectations of her. She's stuck on the road to success, stuck with her boring business wardrobe, but she is still stuck with no other good choices. She must do what is expected of her.

I don't need you. I don't want you. I am free of you and all that you represent. It would be a mistake for me to pursue this. You are not my type of peeps.

That's what that interview did for me. I hung out at the school and environs all day, and that showed me that I do not want this.

I thought of George Bush II going through this same program and then thought, "Jesus f'k'n Christ."

My crystal ball says, "Get the fuck out! Run, Boy, run like the wind!"

In fact, I don't even want an MBA.

That too would be a mistake for me.

For me, that would be a gigantic waste.

Better I do something else.

Anything else.
Posted by Chip Ahoy at 1:35 PM

Bill Shakespeare had a way with words. It's as if he molded Cassius' clay to make that character come to life.

Well, it applies equally to our "Crazy Elites, their status anxiety is INSANE!"

They can't win on their own.

They have to cheat.

Then after they cheat and win the guilt is baked into them and they are up for any guilt trip that comes along.

Then after they cheat and win the guilt is baked into them and they are up for any guilt trip that comes along.

I believe that to be the result of a process that begins in childhood through repeated interactions with others in which the growing child and those around them are not held appropriately accountable for their actions and words.

And by accountable, I mean the kind of firm but gentle sorting out that leads to an appropriate sense of responsibility which eventually grows into an adult ability to ask, "What does this situation involve? What is my part? What is your part? How are we going to work this out together and move forward?"

Another opportunity to course correct comes up during adolescence and if that doesn't happen then society ends up saddled with angry, self centered adults who do not know how to own their part or work with another toward resolution.