Over a decade ago a friend was way into water. He drank water all day long. He knew all about water molecules and what happens to them when they're municipally treated, he knows what other particles  they contain, how the molecules are reorganized through osmotic filters, and he knows about so-called water memory. He's metaphysical about water.

Denver water is fine. I think it's great straight out of the faucet. But he thinks it's terrible and needs a lot of help.

My brother put a small filter directly onto my water spigot three apartments ago. My friend took that small one off and attached a 10-stage filter that's separate.

It really does work. But I cannot tell the difference. I know it's effective because I use it for the aquarium and the neon tetras breed in it, and they're an incredibly sensitive species. You'd think the Amazon water is hard due to all the clearly visible dark tannins, but that is just stain. All the minerals of the Amazon are locked up in the canopy, the ground holds nearly zero minerals. The water is incredibly soft.

Another different friend stops by for morning coffee.

I was fixing two large cups by way of the AeroPress. 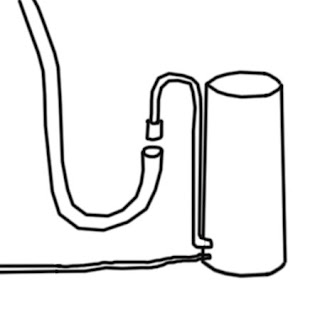 I filled a cup using the 10-stage filter then realized I hadn't used bleach to clean its tip since using it to fill the aquarium. So, for the second cup I used the regular tap so my friend wouldn't get aquarium germs.

He saw me make that switch, and being a basic asshole who likes to catch others to make himself feel intellectually superior, he goes, "Oh, so you use the filter for yourself and use the regular tap for me."

I dumped out the water and re-filled it using the filter, silently admitting the fault.

Heated the water, made the two large cups of coffee separately, actually a quart each in Mason jars. The AeroPress makes espresso and that's diluted with the remaining heated water. Weird. But it's delicious as coffee gets.

Then sitting down with his cup in hand he doubles down on his accusation against me.

"I can't believe you sometimes. You filter your own water but not mine."

His eyebrow went up.

"And when I drain the tank then the filter side goes into the toilet. It's held in place by the seat with a hole in it where your butt cheeks hang out and your poop passes through and sometimes splashes back up. So either the aquarium or the toilet side of the hose touches the tip of this filter and I forgot to clean it with bleach. And I realized that after I filled my cup and I was saving you from that toilet/aquarium water  hazard but then went along with you since you're being an asshole about it."

Oh how we laughed. Because there really isn't that much of a danger. But I do need to remember to wipe off that tip with bleach just in case.
Posted by Chip Ahoy at 2:59 PM

Friend sounds like a jerk.
Just ask the friend if he likes aquarium water ... now with fish poo and snail goo.
Maybe he'd appreciate the extra protein since he's all up on water content.

I've written several comments that I've deleted prior to this as there is something about this story of morning coffee that bugs me. What is it? I don't know for sure, but it has to do with the way observation and judgment end up twisted together in ways that do not invite laughter in me.

When the friend who arrived for coffee noticed (with his eyes) the incongruity of two different water sources being used for two different cups he presented that observation to his coffee making friend with an incorrect belief attached to it. That's the first twist.

On hearing that observation (with his ears) the friend who was using two different water sources to responsibly address a previous responsibility he hadn't met, took the second turn. He responded to the incongruity he was noticing/hearing (correct visual data, incorrect reason) with a judgment regarding his friend's basic character which prompted him to respond with stonewalling rather than offer the truth that would lead to understanding.

While neither friend was clean in their handling of what they saw and heard, they weren't exactly dirty either, much like the hose in question.

No big deal really. Adults are used to this way of relating. Over the years they've learned how to play the game. No harm, no foul. Children not so much. And there's the rub.

This story replicates a pattern I encountered over and over in my own childhood and continue to see revealed in adults who choose to respond children's truthful observations (what they've seen and heard) with deflection, judgment and stonewalling to avoid inconvenient truth or cover their own behavior. When adults do this to each other, its assholes all around. When they do it to children, they distort and mislead, with long term consequences realized down the road.

Our brains assign meaning to the sensory data we receive; noting congruity and noticing incongruity is necessary to survival.