I had the last few pounds of a 50 pound sack of potting soil inside that was leftover from last summer. Apparently I must have poured dirt back into it because I scooped some out to plant the top of a pineapple and morning glories sprung up thick as a lawn. The forgotten dirt that was returned must have been loaded with morning glory seeds. How else could they get in there?

Or maybe it was the morning glory ghost haunting me again. 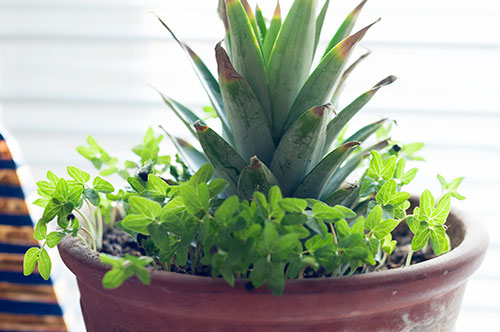 No wonder they're regarded an invasive species.

You only need one little seed and in two seasons they can take over a whole fence.

That's what I'm counting on as I go around dropping seeds in other people's gardens and other neglected spots where I notice water tends to drain and with something nearby they can climb on.

The pineapple will grow new leaves like forming a cup inside its old leaves then send up a stalk from the center with a smaller pineapple on top.

"The morning glory ghost." If there is one, and I wouldn't be surprised, it's probably a friendly ghost, if somewhat of a social climber.