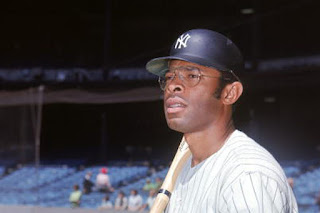 Today was opening day at Yankee stadium. I once had a consecutive streak of going to 36 Yankee opening days back in the days of my youte.

My first opening day was in 1964 in the old Yankee Stadium. The great Yankees were making their last hurrah that year with Yogi as the manager. Mickey. Roger. Whitey. Tommy Tresh. Elston Howard. I took the subway and carried a sandwich in a paper bag. The only problem was that I had to sit behind a pole that blocked my view. That Tommy Kolwaski was one fat fuck.

Then it was the bad times. Horace Clarke was the symbol and the curse. Roy White and Bobby Murcer tried their best but they just couldn't do it. Every year they brought up young kids who were supposed to turn it around. Frank Tepedino from Staten Island. Johnny Ellis. Rusty Torres. They just never panned out. Still and all I was there for opening day.

Then we started to see some light. A tough talented barrel of a catcher called Thurman. A few decent pitchers starting with a fire balling Cajun. A slick fielding third baseman named Nettles. A few good trades. A crazy speed demon named Mickey Rivers. We made it back to the series only to be crushed by a Big Red Machine. Then craziness with Reggie and Billy and all the rest of the circus. Still and all I made opening day.

Back to treading water. A classy first baseman with the kid from Indiana. The greatest base stealer of all time with Ricky. Dave Winfield to give herpes to a seagull. Mel Hall. Free agents. Turmoil.Still I made opening day.

Finally the classic run. The core four. The Captain. Pettite. Posada. The great Mariano. The unprecedented run. The greatest team of all time! I had season tickets for the fifteen years and still and all I made every opening day.

Then I got married. The wife and I made four or five opening days. But life got in the way. It got more and more expensive in both time and money. We were saving up to start a business. So I gave up opening day. The smell of spring. The sound of the crack of the bat on a ball. Hot dogs. Beer. Summer of my youte. Gone now. Just a memory.

The Yankees won today. I listened to it on the radio. I am very happy. I still follow them religiously. I just can't get to church. I know they don't miss me since the pews are filled with rich fucks and loser cucks who pay the freight these days.

Still and all Opening Day is one of my favorite days in all the year!

It means summer is here. 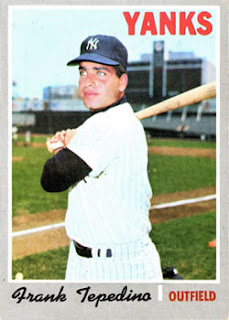 All they had in the wilderness years was Mattingly.

I remember the good and the lean, boy we did have some lean years too.

Awful. Just as I was getting old enough to be a real fan and go to games they sucked.

Good to have you back. I was listening to baseball as I drove through the West today. Uecker went on a bit about Charlie Silvera who backed up Yogi and hardly ever played but had 10 World Series rings. I took a detour and am staying in Deadwood tonight. HBO is doing a Deadwood movie. The trailers are out and it looks great.

Thanks Nick. The Deadwood movie looks great. I envy you the trip out west.

I am so happy that baseball is back. It is the last sport that I follow these days. Listening on the radio at night is something to look forward to these days.

They waited too long - Powers Boothe, who played Cy Tolliver, Swearingen's rival and nemesis, has died. By the time he was my age he had been dead a year.

Alma, played so beautifully by Molly Parker, and an actress I paid attention to, was last seen riding out of town in a wagon. Perhaps Jewel will be back - she is a treat and dances as lightly as a woodland creature.

Jim Beaver, W. Earl Brown, Garret Dilahunt and Timothy Olyphant all moved on to Justified, where some of them did pretty well. I can't imagine that the rest of the cast has held up well in the 15 years since the first episode was filmed - for example, the hoople head child - she has to be approaching 20 years old at this point.

My point is, they have missed their target window by at least 10 years.

Shot some craps by myself last night. Deadwood is a ghost town..at least in March. Dealers tell me weekends pick up a bit, but summer is when the town comes alive. Rooms were cheap. Stayed @ a nice hotel made out of the slime plant. The room was $59 but the tax was $25! Worse than Chicago. Taxing the hell out of visitors plays well in local elections but it's myopic. Had a good steak @ the Gem.

Driving through the West one can't help but see the entirely different reality between these folks and big city people.

You got that right - that is true in small towns all over the country.

I just started watching The Highwaymen, the story of Frank Hamer and how he hunted down Bonnie and Clyde. It has Crash Davis himself in it. And Mrs. Hamer is played by Joanie Stubbs from Deadwood. While looking up her credits I read that the Deadwood movie is set 10 years in the future from the last tv epi. Well there you go - they just answered all of my concerns.

And you have got to be kidding about "slime plant", right? Tell me you are kidding.

Slime plant's cross the street from snake farm....evahbody knows that!

Sixty, I kid you not. Google, Deadwood Slime Plant, and learn of a unique way to become a gold baron. They kept the plant structure in converting to a hotel/casino, making it a bizarre, multi layered complex.

Interesting - I wonder what the chemical process is.