I stopped by the Sartorialist and saw this photo on the front page. The photo received double the comments of photos around it. They like the color, the style, the combination, his complexion and bone structure, five people identified him as the pianist, Benjamin Clementine. 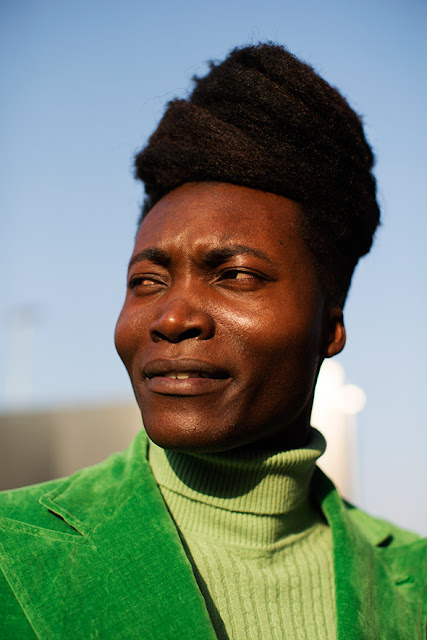 
The photo above in green looks like a friend of mine, Dexter.

He lives in this building and I catch him here and there off and on. He's a very busy man so less frequently lately.

We did a few photo sessions for his portfolio. Before starting he came over for lunch and he mentioned wanting to get something started. He was full of ideas. I pulled out my camera, put on an appropriate lens and fiddled with the settings. He's very demonstrative and he was already acting out. But he was not ready to start. He became self conscious once my face was behind the camera. I told him the dramatic poses he was showing me remind me of Grace Jones and he stopped short put both hands on the table with his arms forming a box with his face on top jutting forward between them, another perfectly posed picture, and said, "YES!" *click*

This is him ↓ and another friend having a casual dinner. 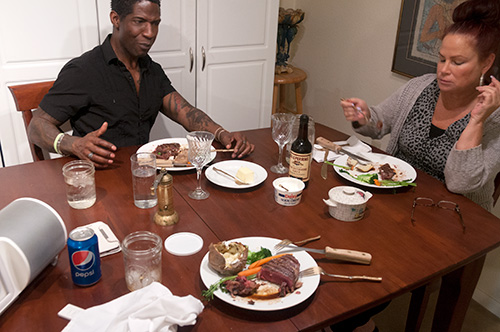 I don't know why I don't do this more often. We always have a great time. No matter who it is I invite over.

Oh wait, I do know. I have to clean up the whole place first; dust, vacuum, make my bed, take out the trash, bathrooms, tidy up, the whole bit.

Wouldn't do having everyone know I'm a slob.

But let me tell you something about Dexter.

I went downstairs to the bottle shop for my usual 12-pack of Coca-Cola and saw him working behind the counter. The guy is extremely active. He's all over the place. More than anyone else that I know, he uses the neighborhood for all that it offers. He's extremely versatile. He's ambitious.

It was crowded the moment I dropped in. I waited at the far end of the counter as customers were served one-by-one. As Dexter rang up each customer he engaged them conversationally so skillfully and so sincerely that he made each person feel that moment is the most special moment of their whole day. His pleasant nature puts everyone at ease. When he speaks to me, I feel special and he does that with everybody he engages.

I told him that and he thanked me for saying so while acting like he had never heard any such thing.

I told him that his presence in that store positively changed the vibes of the whole place. And I'm not kidding. His being there positively changed the personalities of all the other workers there. He rubbed off onto everyone else. It's a palpable change for the better. Everyone is more pleasant to deal with. Everyone is more helpful, more talkative, more positive. I don't think the owner quite understands what a unique treasure he has in Dexter. He makes everyone feel better. I watched it repeatedly.

Later, I told that to Deena, the woman at the table, and she readily agreed. She said, "Some people are made for that kind of thing." Neither of us are that gregarious nor have his effusive positive ambitious energy.
Posted by Chip Ahoy at 6:05 PM

I would give this guy a wide berth. But that's just me.

Neon green velvet blazer over pistachio/lime turtleneck is a bold sartorial declaration. It's not ordinary, like the song goes - no one's going to think he blends in with so many other ordinary things.
****
It's not easy bein' green
Having to spend each day the color of the leaves
When I think it could be nicer bein' red or yellow or gold
Or something much more colorful like that

When green is all there is to be
It could make you wonder why
But why wonder, why wonder?
I am green and it'll do fine, it's beautiful
And I think it's what I want to be

Wait, you are shittin' me - dude's clothes are green? Shee-it - the things one misses - thought that stuff was brown.