I spent the weekend turkey hunting with my son, my nephew, my brother, and his friend. This was the first time I'd been hunting in about 45 years. The last time was shortly after my dad gave me a .22 caliber rifle because, well, that's just what fathers in Wisconsin did back then. Rite-of-passage and all that. I went squirrel hunting with a best friend, we each shot a squirrel, and I felt terrible. So I put the gun away. Now I came from a gun-toting heritage as I explained in part back here.

We didn't get anything both mornings, even though we could hear toms gobbling. So no animals were hurt. We did get to shoot some cool hand guns because my brother's friend is a collector. He brought along a 9mm German Luger and a .45 caliber 1911 Browning service pistol. Both weapons have storied histories on two sides of major twentieth century conflicts. The Luger especially intrigued me: 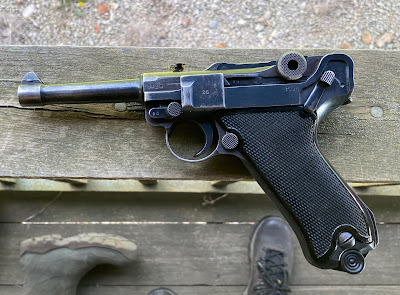 The 9 mm weapon first appeared in 1908 and was called the Parabellum Pistole. "Parabellum" is Latin for "prepare for war." What an understatement in 1908. I particularly liked the stamped engravings; the word "beladen" (loaded) appears when a round is chambered: 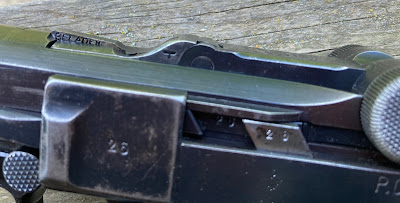 The word "gesichert" is revealed when the firing pin is safetied: 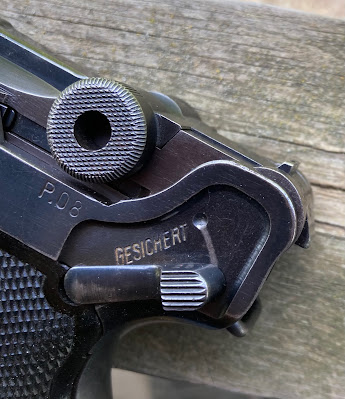 Of course we had many discussions of gun laws and the intentions of the Biden Administration and nascent Harris Administration. The locals are not convinced that the Fed's intentions are kosher. Universal gun registration followed by gun confiscation IS the ultimate goal. How do I know this? I know too many Dems on board with the notion that all guns are icky and need to be rounded up and destroyed, just like in the rest of the Anglosphere. Funny, nobody ever mentions Switzerland. The other side's attitude is best summed up by the defiant Greek expression μολὼν λαβέ (come and get them) first uttered in 480 BC.
There is another movement brewing called "2nd Amendment Sanctuaries."  The usual suspects in the media are calling this movement anti-common sense. That's a bit rich coming from the side that backed and continues to back Sanctuary Cities. I say turn about is fair play.
Posted by chickelit at 8:29 PM

We called them Lugers when I was a callow youth. I always liked the design, but my older, more gun-savvy brothers did not like them.

We all agreed, however, that Saint John Browning's (PBUH) Model of 1911, as gun guys call it, is a classic design. It has stood the test of time and battle for over 100 years now and for many it is their sidearm of choice. Just so we are clear, I don't own one. One of my brothers claims that our uncle carried one on Guadalcanal and Tarawa. I have no idea whether or not that is true, but it seems plausible.

I went hunting once in 1971 or so - we were looking for pheasants as they are good eating, but saw none. I was okay with that - no reason to go around blasting poor little wild creatures.

Did I mention I just watched "My Cousin Vinny"?

"Vinny: What about these pants I got on? You think they're okay?
Mona Lisa: Imagine you're a deer. You're prancing along. You get thirsty. You spot a little brook. You put your little deer lips down to the clear blue water... BAM! A ****IN' BULLET RIPS OFF PART OF YOUR HEAD! YOUR BRAINS ARE LAYIN' ON THE GROUND IN LITTLE BLOODY PIECES. Now, I ax ya. Would you give a **** what kind of pants the son of a bitch who shot you was wearing?"

I am kind of with Mona Lisa on this one...

I carried a .45 in Nam... it was a goddamn pain keeping it from rusting to pieces. Fortunately the bastards were never close enough for me to need it.

One of my brothers claims that our uncle carried one on Guadalcanal and Tarawa.

Not sure what rank in USMC was issued the 1911. My father ((US Army, 3rd Armored Division), was issued one in 1951 occupied Germany when he drove a tank at a private's rank when the Cold War raged and bodies stank (in Stalin's Russia).. There are photos of this.
The 1911 was indeed classic. It was replaced briefly by the Beretta 9mm, but then replace by the Sig Sauer. The special forces have always kept the 1911.

Not just rank, but position... squad leader, i.e., . Tankers likely were always/have been issued. Poor bastards, trapped in that hull.

There will always be a 1911 of one sort or another. It's just that good.

My Dad also served in the occupation of Germany during the Korean War. I would have to go back to his slides to see if he wore a sidearm but don't recall any weapons in the photos. When I digitized his 5000+ slides a couple of years ago I glossed over all of his Army buddy pics because they weren't family pics.

Here's how Dad got out of going to Asia: At the end of technical school after boot camp, the trainees do a field exercise. His sergeant tells Dad and the boot carrying his other half of the tent to pitch it right there. There being a poison ivy patch. Dad, being highly allergic, ends up in the Post hospital for two weeks, shipping out with the next trainee group to Europe while his group went to Korea.

Because Dad was a) in the Army two weeks longer than any of the other boots and b) a college graduate in Chemistry from Michigan State he was made acting corporal for the slow trip over. They were actively recruiting him for OCS all during his tour. And he was promoted to actual corporal.

After achieving his Masters in Metallurgy from Rensselaer Polytechnic after serving his time he was hired by Union Carbide to help build nuclear weapons at Y-12 in Oak Ridge. Which is how I was born in Schenectady and raised in Tennessee.

Tankers likely were always/have been issued. Poor bastards, trapped in that hull

Tankers were all trained to do each other's job in case of injury. There was nominal leader but each man could do the other's job. So that's probably why each carried one.

My dad already had an older brother in combat in Korea. Not sure if that played a role in his getting shunted to Germany.

After achieving his Masters in Metallurgy from Rensselaer Polytechnic after serving his time he was hired by Union Carbide to help build nuclear weapons at Y-12 in Oak Ridge. Which is how I was born in Schenectady and raised in Tennessee.

Two sort-of related things - I watch too much television, of that there can be no doubt. Years ago I saw bit on "Pawn Stars" where a customer brought in a war booty Luger pistol. What I learned during that episode was impressive - the Germans were obsessive about stamping serial numbers on every part of their pistols and the one on the show was missing its original firing pin. I think it was later located, thereby greatly enhancing the value of that particular piece, but dang - even the firing pin had a S/N? I was impressed.

This morning while waiting for a customer to arrive (remember, the reason we call them customers is they make you cuss) I was watching an episode of "Mad Men". In this epi an American Airlines plane crashed into Jamaica Bay, and since the show included actual events I looked up the crash of AA flight 1 in 1962. Among the prominent passengers killed was George T. Felbeck, retired president of Union Carbide and former operations manager of Oak Ridge, Tennessee's uranium enrichment plant. TV meets blog life.

I watched "Mad Men" when it was first broadcast, so long ago that when I visited my son in the Big City in 2010 and saw Madison Avenue I could kind of relate to what used to go on there, long ago and far away. Now I am rewatching it. I hope that someday I can leave home, that it will warm up enough so that I can work and then I can stop watching television. I have a dream!

My own connections to Union Carbide are in chronological order:

(1) As kids, we loved playing with carbide cannons; Calcium carbide was the raison d'être for the company. There probably wasn't a miner in Appalachia who didn't use his carbide-fueled lamps. They were ingenious.

(2) The whole "Bhopal Aerosol" event occurred while I was an active research chemist and I damn near went to work for them in WV. Good thing I didn't because that accident ended up bankrupting them.

(3) While visiting our daughter at UCSB a few years ago, I became aware of the ruins of Knapp's Castle up in the Santa Ynez Mountains behind Santa Barbara; Knapp was the founder of Union Carbide and built a retirement home there which burned in a wildfire.

Oak Ridge was created to enrich uranium as part of the Manhattan Project. The three methods that were thought feasible were employed in three different "plants" as we called them. The one code named K-25, the Oak Ridge Gaseous Diffusion Plant was the one led by Mr Felbeck. The X-10 plant later became the Oak Ridge National Laboratory, and the Y-12 plant was never renamed anything else, the better to reinforce its top secret nature.

We used carbide lights in Boy Scouts when we went spelunking. I had brought one home and Mom knew all about them, her being from Welsh coal miner stock by way of Colorado mining entrepeneurs.

I used a carbide lamp while spelunking around Bloomington Indiana. Limestone is conducive to making great caves.

Cars used to use carbide lamps for headlights. Our current headlights are better.

If the feds ever want to actually confiscate firearms, I suggest all good citizens should agree to bring them to DC in person to turn them in. Obviously we won’t have any further need for any ammo we might have so we should probably bring as much of that as we can carry as well. I suggest we all plan on arriving on the same day to minimize administrative issues.