The Democrats are starting with their attacks on the Jews 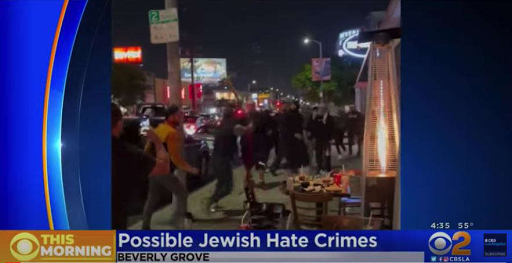 Well it seems that all the work that AOC, Rashida and the rest of the Squad have been doing has not gone to waste. A roving band of Muslim terrorists went on a rampage in LA last night. They went to a restaurant and demanded to find out who were the "Jews" and proceeded to beat them. Now the savages of BLM had pioneered the harassments of innocent diners and their fellow travelers the filthy Muslims have followed suit. It is so bad that even the shitty mainstream media like Newsweek has to report it.

Of course they are attempting to minize it. There will not be any hate crime designation because white people can not be the victims of hate crimes. Which  I guess is good news for the Jews.

Now they are considered "White people."

Labels: Al Sharpton, I know bullshit when I smell it, Is it good for the Jews, Its sick out there and getting sicker

I don't mind if they'd give the ones in congress a sound thrashing.

Demos have been attacking them for years.

Watch another Demo constituency start to wise up.