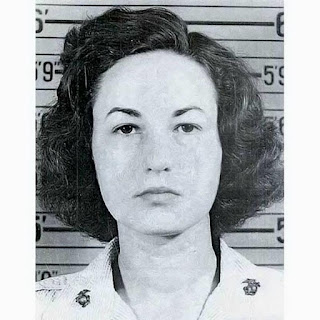 She knew that Lady Godiva was a freedom rider and was old enough to know her personally. She really hated her cousin's husband and had the sexist daughter ever on National TV. Later on she moved to Florida and became a real pain in the ass.

Labels: whose that girl

Is that Queen Elizabeth's booking picture? What was she picked up for?

I think she might have been a Lez but she is not a Liz. Sorry.

I know who it is, she spun off Archie and Edith's show.

It was OK for her to join because that wasn't WWII, it was The War To Save Communism.

had the sexist daughter ever on National TV

Think you mean sexiest, but I have to demur anyway.

Skinny and skanky. And, of course, man-hater.

That is correct, CT, and XRay, your first statement is correct, however, I cannot attest to the truth of your second comment. And that is not one of those "I can neither confirm nor deny" statements - I never met Ms. Barbeau.