The last few days, whenever I step outside or even open a window, I'm assaulted by Seventeen-Year Locust Surround-Sound. (They're officially cicadas, but I grew up with locust.) I have to say I like it, though I'm less fond of the crunch-crunch-crunch when I walk on the sidewalk. 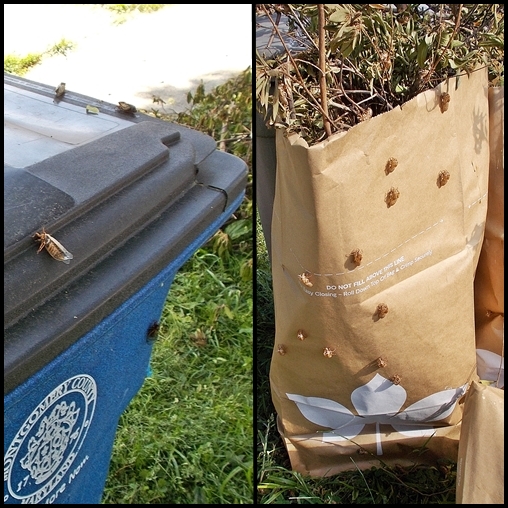 They're all members of "Brood X," which sounds like a low-budget horror movie until you realize that the "X" is a Roman numeral. There are apparently XII broods, each with its own territory and on its own schedule. Plus III broods of 13-year locusts, which I hadn't known about until today. The parks people hung a helpful sign on a tree in our little neighborhood park: 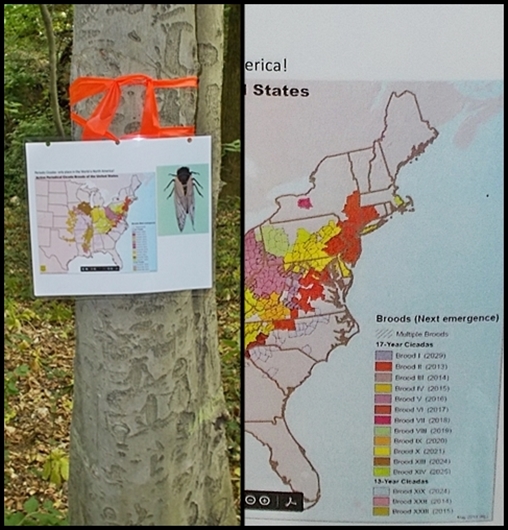 Here's a better look at that map.

The National Park Service did a nice FAQ, which includes this note:

By coming out in huge numbers, all the predators that eat cicadas can get their fill and there will still be plenty of cicadas left to breed and perpetuate the species. It’s a survival strategy called prey satiation.

Down at the streambed, the crocs are gone. Maybe the ducks ate them. 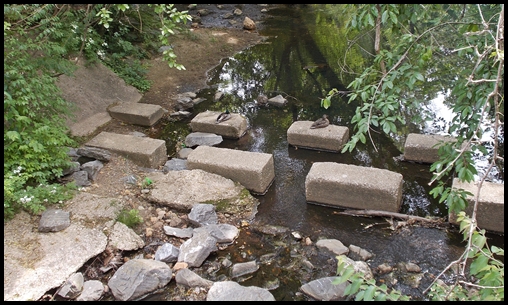 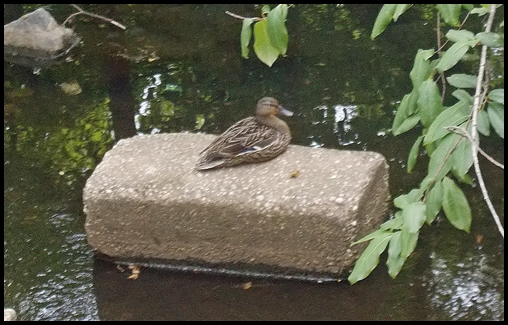 Posted by Mumpsimus at 1:00 PM

Hey, Monkey county! I grew up in Monkey county. They have the best cicadas there. I remember the previous four broods. They were loud.

We don't get many around here, and even though I am hard of hearing I am pretty sure I would notice them if they were here in any great numbers.

I looked for a video that featured the sound, but I couldn't find one that does it justice. It's really overwhelming.

Seems like I heard cicadas every summer in KC.

I was in Columbia MD for the brood in the late '80s. The sound was amazing - it arrives in waves. Really loud waves of insect cacophony washing o'er the land. One needs to be there to truly appreciate how overwhelming that experience is.

Also, driving on the highway was interesting. Bugs, billions and billions of bugs!

There are cicadas every year - but the 17 year locusts are the main cohort. Think about their lives when they are not above ground - for 17 years they wander underground, checking their calendars "Time to go?" "Nope, not yet, go back to sleep".

Wisconsin's brood isn't due out for a couple years. I certainly remember that distinct, annoying sound from years ago. I don't think CA had them. Termites displaced them all.

The sound is annoying but I got fairly acclimated to it after a few summers. Much prefer crickets.

Not sure which is worse, Whitmer or a go-round with those critters, which thankfully don't make it up to MI. Both fall into the category of dreadful, hellish experience. I had to take in the peacefulness of the duck pics just to clear out the yuck factor of the imagined crunch while walking.

The yellow Crocs reminded me of the spring buttercup pics before the loogie image was stirred, and they also served as a cheerful note.

This, from the helpful park info, Entomologists believe that the sound protects these insects by hurting predators' ears. reminded me of an experience we had in Kansas City in 1995, when we were staying in an apartment there for MrM's work. I didn't know what the sound was when I first heard it, and was genuinely alarmed, thinking it was an emergency warning it was so loud and intense. Turned out to be a cicada, but don't know from the maps which batch it was from. Maybe it was a straggler, as it just seemed to happen every now and then.

While looking up how loud they can get (100 decibles) I found this:

So, if you're feeling adventurous, and since cicadas are sort of like shrimp, here's a recipe for cicada scampi.

1 pound cicadas
4 TBS or so olive oil
4 cloves, or more, of garlic. (You probably want to use a lot of garlic.)
Salt and pepper, a dash or so each
A good shake of crushed red pepper
Half a stick of butter
About a half glass or so of white wine
Juice of half a lemon or maybe a whole
Minced parsley
Put the olive oil in a pan over medium heat. Toss in the garlic and saute for a minute or so. Add the cicadas and season them with salt, pepper and red pepper flakes. Saute until the bugs begin to cook. Add the butter. Once it melts, add the wine and lemon juice and let it simmer for a few minutes. Sprinkle chopped parsley over it when it's done. Serve with linguine and white wine. (Lots of white wine.)
And here's a cocktail to make you forget that you just ate bugs, a bloody cicada.

A couple of shots of vodka
Bloody Mary mix
A stalk of celery.
Dash of hot sauce
Shake of pepper
Mix it up and garnish with a couple of cicadas on a cocktail skewer.

I have recently developed Tinnitus. It sounds like those bastards are around 24/7 for me. At least when I notice. It's very loud (equivalent to about 50 dB), but it's amazing how little I notice unless I think about it. Then it's usually the loudest thing in the room. Nothing reasonable can be done about it. It's really just in your head. Your mind and audio organs work together to just make it up.

bag, Tinnitus is pernicious, sorry you have to deal w/ it.

Ahead of the curve at Levity, with today's link at Maggie's Farm going to mention of the emergence of Brood X and the nutritional value of eating cicadas-- with a crunch, crunch, crunch!!!

Billions of Brood X cicadas are emerging after being underground for 17 years. As many in the eastern U.S. anxiously await their arrival, others are preparing their plates for what they say is a delicacy.
https://www.cbsnews.com/news/cicadas-brood-x-eating-food-delicacy/