On Selling the Goods (and the Science!), Challenges Faced, and Whiffs of Coercion 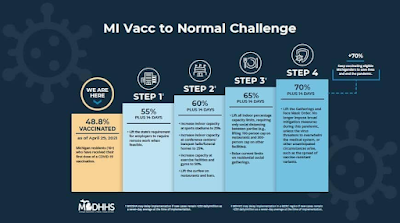 We fired up the old orange lawn tractor yesterday to mow the lawn for the first time and mulch up the leftover leaves.  Thankfully it started, as it usually does, like a champ on the first try. Good thing too, as word is the price for this year's best selling model of orange riding mower just went up another $500.  And the stashed mower inventory, intended to last through June, is on the verge of being depleted.  While Michiganders are big into self-reliance these days, with sales to match, there’s not enough inventory available to meet demand. Metal store fixtures needed to expand and open new locations are through the roof pricewise and difficult to find. Office equipment is also on the rise, with computers similar in style to those purchased six months ago, now up another $900+ and on backorder.  Michigan stores specializing in outdoor adventure equipment and vehicles can’t get stock in to sell.  Polaris UTVs, normally parked like ducks on the lawns at MI dealerships in May, are nowhere to be found, with delivery dates on paid orders out 4-6 months.  And new Ford Trucks assembled in Detroit are currently being stashed in parking lots, awaiting an essential computer chip before full assembly can be completed.

Michigan is currently experiencing a severe shortage of tech, trade and service workers with 2000 jobs open in our county alone and no one available to fill them.  Our local pizza shop began closing on Tuesdays due to lack of workers, and this week the neighboring Taco Bell, which has had a steady stream of income from take-out traffic since the shut-down, had to close for a day due to lack of staff.  While all this may sound small and random, they're indicative of significant changes to the bigger picture here in MI and elsewhere that are starting to add up.

This week Gov. Whitmer rolled out her catchy new MI Vacc to Normal Challenge.  Visually, it looks good, impressive even, as if everything is under control.  She’s a whiz at coming up with slogans, posters, and ways to pass the responsibility she holds on to others.  And all that's required of smart Michiganders in order to have their rights returned and get “vacc to normal” is for them to take a shot or two, and go after those who don’t.  Then and only then, fourteen days after the 70 percent goal has been attained, can the state wide mask mandate finally be lifted.  And who wouldn't want that?  Leaving me to wonder, “What’s normal”? And how does a state that’s had the rug of regularity,  productivity, and accessibility pulled out from under its feet, find what it needs to stand and climb anywhere?  Is there a whiff of coercion with this?  One that smells strongly like the scent of a 2 or 3 year old’s unchanged diaper?
As of Apr 26, Michigan’s face mask mandate now requires children ages 2-4 to wear a mask in all public places, including schools, childcare centers and camps.  Just how clean and cootie free those little masks will end up being after 2 hours, much less a day of use, is for those who devote themselves to focusing on The Science to figure out.  Anyone who's attempted to put socks and shoes on (or any item of clothing for that matter) and make sure it stays on a child going through the Terrible Twos is familiar with the amount of insistence and energy that sort of venture involves.  Is the new tiny mask requirement a way to encourage battle-weary parents who’ve previously been resistant about taking the Shot, to finally give in and get it, in the hope of being able to someday take their child out in public or send them to child care again without a mask?  Who knows what drives Whitmer’s responses and edicts?   Last year at this time, she was intent on blocking the sale of seeds, paint and other home & garden merchandise while prohibiting motor boat use, and sending elderly Covid positive residents back from hospitals to unprotected nursing homes as part of her effort to slow the spread.
Listed below are the four vaccination-based milestones that make up her latest Challenge.
It’s hard to believe other states have managed to find their way back to more health and openness without them!  Interestingly enough, a report from a loved one in Atlanta, who regularly travels between MI and GA (where no state-wide mask mandate was ever in place and restaurants are now fully open with a reduced distancing requirement of 3'6" ft.) said the employees in the national chain stores in that area are still wearing and requiring masks, while the smaller stores and restaurants aren't.  Today, as he was entering a local GA restaurant to lunch with other maskless customers, he noticed the sign in the window advocating mask use was marked with MI.gov in the corner!
Posted by MamaM at 6:37 PM

I don't understand how that is enforceable - are the sheriffs going to shoot 3 year olds? How about "I do not consent" or "I will not comply with that illegal order"? We used to be a bit more rebellious.

It may be tied in part to a parent's ability to receive state and federal assistance and child care. No one wants to be reported as non-compliant. There's a sector in MI that's had high Covid numbers, yet's been resistant when it comes to taking the shots, and this may be one way of "forcing" compliance.

Whitmer backs her stuff up, not with so much with sheriffs, as with the implied threat of losing a state-issued license to operate or in the case of a parent, being reported to CPS or a gov't authority. Bars, barbers, restaurants and healthcare providers are in jeopardy of having their licenses pulled if they do not comply with her rules. Add to the list doctors, dentists, veterinarians. (This explains why our vet's been so vigilant about the pick and drop off of pets--with owners having to wait outside in the car.) It's not so much about passing covid in the office (which can't be any more of a risk than passing it to the clerk in the grocery store), but exerting control in areas where there's a strong fear of losing something valuable. It's pretty insidious. Once she threatens a select few, the word spreads.

I just got an email from the guy who painted our home when we moved. Apparently, paint is also in short supply now. Not that we need any, but it's another indicator of a disturbance in the force.

Cue Janis Joplin, lyrics by Kris Kristofferson "Freedom's just another word for nothin' left to lose". This crap is pushing me towards nihilism.

Here's the other thing. Who can believe a state would put this on the parents of 2,3 and 4 years olds? It's so unseemly, people don't want to look at it. It's another version of having a demented president and not knowing what to do about it.

We, individually and collectively, know what to do. What we lack is moral conviction and moral leadership. We are seeing the collapse of the west play out in real time.

I bet some cat lady in a cubicle really enjoyed pulling those percentages out of thin air and linking them to arbitrary rewards.

Hey, does anyone in Michigan (outside of government/media) actually use the word "Michigander" with a straight face? Well, what's good for the Michigoose, I guess...

"Thin air" if you are lucky! You wouldn't want to touch them!

And thanks for making a connection that had never dawned on me. Now do "Glaswegian!"

Anybody who ever saw Ghostbusters (the good one) remembers Venkman's Law: Lenny, you will have saved the lives of millions of registered voters. Things are getting tighter and tighter in MI and eventually, the Ubersturmbannfuhrer will find she's pushed people too far.

Mama mentions a paint shortage. It's one thing to put up with shortages when you're fighting a tyrant trying to take over the world. People will grin and bear it.

But, if it's a tin penny tyrant who thinks she can't be touched, then you're going to see some action. Especially if you're messing with people's kids.

Warm weather is coming. And I think it's going to get hot.

This crap is pushing me towards nihilism.

That's the point. Nobody but Ashli Babbitt has been shot. Rosanne Boyland, Benjamin Phillips, and Keven Greeson didn't have anybody running video when they were murdered.

At the Boston Massacre, 5 were killed (3 on the spot), 6 were wounded (I purposely do not say injured the way it's PC to do now) and it still took 5 years for people to get mad. Nobody likes Joe and the Ho or their policies, so it's all just building but building is not good. Sooner or later there will be a massacre and Fake News won't be able to bury it.

Then we see some action.

PS Trump's going to start the MAGA rallies again. Probably just about the time the results of the AZ audit is made public. Trump intends to demand the same in PA, GA, MI, WI, and NH.

Then the fun begins.

The cost of everything has shot up. (it's a chi com-democrat party miracle!) A single sheet of plywood was 20 bucks - now fifty bucks - or so I am told.

Leftist governors love this crap. Controlling every aspect of our lives is fun for them. Giving priority to insiders and loyalists, leaving deplorables out to dry - all a big phat bonus for the leftwing collective.