What about that new joint for the former victims of TOP? 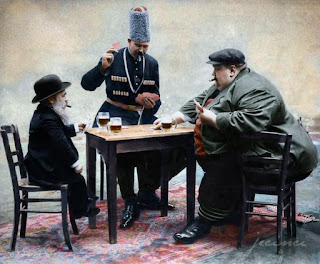 As you might know there was a meltdown at TOP a couple of weeks ago and the comments were shut down. A bunch of those poor saps who still followed that shit show set up a new joint to converse and perverse as it were. I joined up to see what was what and have mentioned our little joint to see if I can get some people to drop by.

I don't know how long they will be in business but I wish them all the success in the world. They have a few solid contributors but the format does not seem to lend itself to long term conversation.

It's all in the game my friend.

I couldn't resist this photo of ricpic, bissage and Palladian from my archives.

Give us a link?

I thought that was me, Hazmat and you. I guess the camera adds ten pounds.

Poor Sap? Is that what runs through the wood of those who riffle through pics of uplifted branches?

As for getting people to drop by Lem's Levity, what do you honestly imagine the draw of this blog to be? What does anyone who reads here think it is?

When I previously asked readers what they come here for, I received one response. Which made me wonder if the 50-100 hits most posts garner come from people who are looking for light entertainment and an unspoken sense of connection to something without much in the way of commitment required. Since then, however, there's seem to have been more comments showing up from what appear to be regular readers, which is encouraging.

The answers to "What do you want?" and "What do you receive?" are key, as they're what motivates ongoing participation and support. They sit behind concepts like "getting, luring, and driving away" participants who have minds and lives of their own; and they drive the bus, prompting daily decisions about where and how energy is spent and applied.

Mumpsimus: It's a group formed at Discord of 90+ commenters who used to read and post comments at the Althouse Blog. Access is granted by emailing: misplacedpants@protonmail.com identifying yourself, and asking for the link. The group is still sorting itself out, with much in the way of information and links available.

Thanks, MamaM; I'd never heard of Discord before. Apparently there's a social media app thingy you have to download. I find the graphics at Discord's site deeply disturbing, so I guess I'll pass.

Well, it says something. I'm just not sure what.

I really miss those all day arguments between Drago and Chuck.

Drago is over at Discord and he's been pretty quiet. I believe it is a no Chuck zone.

I went back to look at the app and laughed. Lots of shoe action, that's for sure! The sort of scene where a 17-year-old larva emerging from a yellow croc would barely yield a second glance!

It was originally formed as a place for gamers to hang out, with this article from a year ago detailing their growth. https://www.protocol.com/discord

Discord is at the center of the gaming universe. It has more than 100 million monthly active users, in millions of communities for every game and player imaginable. Its largest servers have millions of members. Discord's slowly building a business around all that popularity, too, and is now undergoing a big pivot: It's pushing to turn the platform into a communication tool not just for gamers, but for everyone from study groups to sneakerheads to gardening enthusiasts. Five years in, Discord's just now realizing it may have stumbled into something like the future of the internet. Almost by accident.

Back to Levity, the invitation at the discord app under the heading, "Imagine a Place..." comes close to capturing some of the draw here, with a few tweaks to what's being imagined.

...Where you can belong to a school club, a gaming group, or a worldwide art community. Where Just you and a handful of friends can spend time together. A place that makes it easy to talk every day and hang out more often.