As our good friend and Western Historian edutcher could tell you chow mein is an American invention not a Chinese one. Much like chop suey it was a dish popularized in California during the Gold Rush where the chinese  cooks would whip something up for the hungry miners with whatever was on hand.
Chow mein and chop suey were staples of old fashioned Cantonese style Chinese food. That was the food that most Americans were familiar with in the 1950's and 1960's when they went our for chinks. It wasn't until the 1970's that Szechuan and Hunan styles became popular. The spicy Szechuan style become very popular in the mid seventies when I was first starting out as an accountant, My boss Eddie Deutsch was an old style Yid who had about twenty Chinese Restaurants as clients. We would go there with our adding machines and green ledger papers and do the books in between the lunch and dinner rush. That's right. I would bring an old school adding machine with an extension cord to add up the ledger that I would write by hand. No computers. We didn't even have calculators. Just pencils and paper.
When we would come in the waiters would run around like General Taso's Chicken without a head and shout "Eddie Kuaiji Si" which means accountant in Chinese. We would find a table in the back and set up shop. One of our joints was on 46th and Second Avenue. In fact it was his first client and was a feeder for new businesses. A waiter and a line cook would come to work there and learn their trade. Then they would start their own place somewhere in the City and of course they would want us for accountants. So we would get a new account somewhere in the Bronx or Staten Island. This was the time of full service sit down Chinese Restaurants before they started hole in the wall take out joints that seem to be on every other block these days.
Anyhoo the workers would all come out to eat their lunch during this time. They would all sit around the big table and they would put a big bowl of something in the middle of the table. Everyone would have a small  bowl of rice and would fish out stuff with chopsticks and put it in the bowl. When I say fish out I really mean fish out as it was usually fish heads or some other offal that I would never eat in a million years. So they would bring me a plate and it was often Chow Mein.
I make my own Chow Mein these days. I make it West Coast style which is with soft noodles which is often called Lo Mein on the East Coast. The other kind is with fried noodles which is mainly what you get when you order it in New York. It is called Hong Kong style. In any event it is a lot better than fish heads or tripe in brown sauce.We can't eat good greasy Chinese food with MSG anymore. It is not gluten free and the wife can't have it. If I am going to get anything on the sneak it is gonna be pizza so say goodbye to fried dumplings or chow mein.
But at least my hair is perfect. 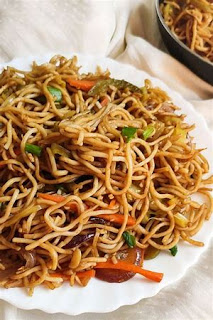 War Su Gai is a "famous Chinese" dish from exotic Detroit. The American name is Almond Boneless Chicken. It is really good but may not be suitable for your diet.

I hear it's better at Ho Lee Fuk's.

I attended an after wedding party in Hong Kong, 67 or 68. Top floor of a restaurant, big round tables with a lazy susan in the middle, 30/40 dishes to choose from, I can only imagine what the hell I ate. For sure I didn't see any Chow Mein. That came later I think.