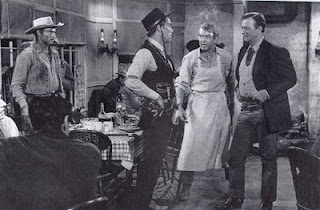 Tom Doniphon: [Valance has tripped Rance in the diner, causing him to spill a tray of food] That's *my* steak, Valance. Liberty Valance: [laughing] You heard him, Dude. Pick it up. Ransom Stoddard: No! Tom Doniphon: Pilgrim, hold it. I said you, Valance; *you* pick it up. Liberty Valance: Three against one, Doniphon. Tom Doniphon: My boy, Pompey; kitchen door. [Valance looks and sees Pompey at the door holding a rifle] Floyd: I'll get it, Liberty! [Doniphon kicks Floyd in the face as he bends down to retrieve the tray]
Posted by Trooper York at 6:51 PM

Labels: Give me Liberty Valance, My boy Pompey

Not PC, but Woody was always a good man on your side.

So Ransom Stoddard picks up the steak while screaming at both of them, goes on to be a Senator and rule over all of us. Which means what? I don't know. What I do know is that neither heroes nor anti-heroes end up (with rare exceptions) wielding real power. Stoddard was a lawyer, right?

Neither the tough good guy nor the tough bad guy wins in the end;
It's the aproned guy who goes to Washington the rules to bend.

You got it in one.

And let's not forget Ransom Stoddard had the press totally on his side...

Remind you of anyone?