Things that happen everyday in shopping districts but are never reported. 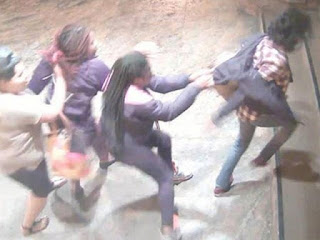 
Chicago police have warned residents about several groups of up to eight girls which are assaulting and robbing female shoppers who are walking city’s famed Loop shopping district.

Chicago police reported that three African American girls, two 15-year-olds and one 13-year-old, have been arrested after being seen on surveillance video beating a female walking alone in the city’s Loop. The victim, one of several, was also robbed of her belongings, according to DNAInfo Chicago.
Officials said the gangs of teen girls would sneak up behind a lone shopper, grab at her purse and/or bags, and push the women down and punch and kick her before running off with the goods.

Labels: crime, its sick out there and getting sicker, Savages

They will also be voting for Hillary.

When there's an Administration that won't allow this, these kids will be spending a lot of time in the clink.

They have a shortage of oppressive patriarchy in their lives, i.e. no dads.

Over 57 shot and 17 killed this weekend in Chicago (including 17 year old twins) . Happy Kwaanzaween and Feliz Día de los Muertos.

Charged with battery. Watt kind of punishment is that? Did they put up resistance? I volt for stronger measures because these current affairs are shocking and these girls have very bad amplitudes. Either directly or alternately, law enforcement is going to have to amp up their efforts, for their approach falls short and these girls are not grounded. Someone should relay the message. Law enforcement need to stop being conductors and capacitors. Or be discharged. They really need to be put into a cell or electrocuted.

I don't want to talk about bad girls in Chicago. Those little buggers are snot my problem.

Guess what? I just now listened to 10 videos on an Egyptian course through Penn state, took my first exam and aced it. Truth is, it was easy and only 10 questions. So it's not like there were 100 questions and I got all 100 right.

Want to see the questions? Okay, here they are. See for yourself how easy.

* 1) On the wall of the Rameseum, ancient Egyptians recorded the names of their pharaohs. This kinglist singled out three kings who began each of the three major kingdoms. Which of the following is NOT one of these three rulers?

* 2) Which of the following statements is true about Manetho?

X Manetho was an Egyptian priest who compiled a history and chronology of ancient Egypt at the request of King Ptolemy II.

Manetho based his work on temple archives, so that it is totally accurate.

Manetho was an Egyptian scribe who wrote his history in ancient Egyptian hieroglyphs.

* 3) Which of the following monuments is NOT from the Predynastic or Early Dynastic Period?

* 4) Which of the following statement is true about the Middle Kingdom?

The Egyptians moved the capital to Thebes, and all the Middle Kingdom kings ruled from that site.

X The kings built fortresses on the southern border of the country for protection.

All rulers of the Middle Kingdom stopped building pyramids.

* 5) Which of the following statements is NOT true about this image?

The major figure is king Narmer, and this object may have been made to commemorate his unification of Egypt.

X The king is depicted as the victor of a war against Mesopotamia.

The king is depicted wearing the red crown on the recto (right side) and the white crown on the verso (left side).

Palettes like this one were used for grinding cosmetics, but size, images, and inscriptions indicate this one was created for ceremonial purposes.

* 6) If you were a scribe who lived in the New Kingdom, and the pharaoh commanded you to compose a kinglist, which name from the following list would you leave out?

* 7) Which of the following does NOT date to the Old Kingdom?

X The royal tombs in the Valley of the Kings

The Sun Temples at Abusir

* 8) Which of the following people did NOT rule Egypt at some point in time?

* 9) The last ruler of ancient Egypt was:

Archeologists discovered an icon of kingship in the tomb.

The excavator dates this tomb to Dynasty 0.

X It is the tomb of the first king Menes.

1) psych out question. Just because it's the Rameseum you expect his name all over the place, and it is all over the place, but not in the list. The other three names are important because they were used there to denote the first dynastic names of each major kingdom division, old kingdom, middle kingdom and new kingdom. A classification used thereafter.

3) sphinx was old kingdom, not the dynasties before that. Earliest writing does not mention it in predynastic and protodynastic periods.


5) palermo palette depicts the king smiting an enemy, and in a form used thereafter for thousands of years all over the place, but not a Mesopotamian enemy.


6) Egyptian historians were quite cross with Hatshepsut for acting like a man, wearing men’s clothes, false beard, calling herself king instead of queen. It offended everyone, the court, the clergy, the army and navy, nobility, so when she died they bashed out her name all over everything, in monuments and documents, furniture, everything. Much like Hillary Clinton. It wasn’t so much that she was female, rather, that she pissed off everyone for being so brazen.

7) Valley of the Kings is Middle Kingdom

8) Israelites, really now, sounded like some kind of joke. All the others did rule Egypt.

9) Cleopatra VII, to be exact.

10) It’s the tomb for the scorpion king, not for Menes.

I like this class because it has a lot of pictures.

The brown liberal Muslim guy who was mouthing off in The Daily Beast article about reforming Islam should take notes. This is how the left likes its brown people.

To me the biggest joke of all is that no one, at least on this thread, dares say the obvious: they're blacks acting black.

But I understand. At this time in this place (by place I mean the entire West) it's taboo.


As to Chip's Egyptomania: it stumped his Ma and Pa and it would have stumped Freud. There's simply no explanation!

Whenever I need a hard dose of Egyptology I flip on the old Karloff classic. Especially for Halloween.

To me the biggest joke of all is that no one, at least on this thread, dares say the obvious: they're blacks acting black.

But I understand. At this time in this place (by place I mean the entire West) it's taboo.


As to Chip's Egyptomania: it stumped his Ma and Pa and it would have stumped Freud. There's simply no explanation!

I didn't think we needed to verbalize or textualize, on here anyway, chocolates being chocolates. It's all right there on the video.