I was fired because I am a Witch 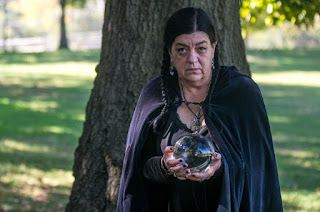 I was fired from a job for being a witch

A news librarian at The Post, Liz Pressman has been a practicing witch for 42 years — and has recently noticed that pop culture has taken a more open view of her religion, Wicca. This is her story . . .
Listening to the human resources manager, I could hardly believe my ears.
“We’re letting you go,” she said. A colleague had complained about the goddess pendant I wore to the office — and I’d blithely informed HR that I was a practicing witch. Being honest about my commitment to “the craft” cost me my job at the investment bank where I was a temporary librarian in 1997. It stung. And, for a while at least, it taught me to keep my faith under wraps because of all the misconceptions about the occult.
Nearly two decades on, at the age of 58, I feel empowered to declare that I’m a Wiccan high priestess who is eagerly anticipating Halloween, known as Samhain, and the start of a new year for those who share my spiritual path and identity.


One of the reasons is that magic and witchcraft have entered the mainstream. You see it in current movies such as “Miss Peregrine’s Home for Peculiar Children” and the upcoming sequel to the 1996 cult classic “The Craft.” Tarot decks are on sale at upscale boutiques like ABC Home in Union Square, and the hashtag #witch yields 2,714,600 Instagram posts (compared to a mere 1,772,500 for #Kardashian).
It appears that millennials who grew up on “Harry Potter” can’t get enough of the feminist pagan religion that worships Mother Earth and uses plants and trees to heal our bodies and souls.
Since Wicca has no central authority, it’s hard to get a tally of members. The most recent figures come from the American Religious Identification Survey, which reported that the number of self-identified Wiccans in the US increased to 342,000 in 2008, up from 134,000 in 2001. There are many witches working in different jobs from law professor to FOX News Anchor to presidential candidate and most people  are none the wiser.
Young and rebellious, I was just 16 when I was initiated into Wicca by some friends. The daughter of a Jewish father (my dad is the journalist Gabe Pressman) and a Catholic mother, I’d long been considered “different” in my hometown of Yonkers. Like the boy in “The Sixth Sense,” I talked to dead people — including my late grandparents. But, unlike that child, I was never scared. The spirits that appear to me are beautiful, shimmery beings offering advice and reassurance.
My initiation ceremony took place in a Berkshires forest in June 1975 when a coven of young witches “cast circle” — creating a safe place between the natural and the spirit worlds — by kissing each other on the lips. Completely naked, I felt at one with the gods and goddesses in the Wiccan tradition.
It was the first of three initiations that culminated, 10 years ago, in my position of high priestess — the highest level in Wicca. There are only about half a dozen of us in New York City. Along with another high priestess, I’m part of a three-person group that gathers regularly for rituals, including “esbats” celebrating the new and full moons, when we cast spells to ensure our well-being until we meet again.
Over the decades, people have had different reactions when they’ve discovered that I’m a witch. After being fired from the bank, I hid my beliefs for a short while. But I finally decided it was too painful to be in the closet. I proudly wore pentacles around my neck. I put on my sacred oils and developed a “take me or leave me” attitude about the craft. My two best friends from high school distanced themselves, no longer returning e-mails or phone calls. A college friend gave me a book about a woman finding Jesus and wished me the best.
Modal Trigger

I’ve grown used to moms on the subway pulling their children away when they try and pet the velvet cloak I often wear to my job as a news librarian at The Post. Kids seem to know witches are safe and cool. They feel our loving energies.
Three years ago, when my group was casting circle in Inwood Park near my home, we were disturbed by rangers concerned because I was drawing a pentacle in the air with a dagger to call the elder gods. “This is my religion and I need to do this,” I said, defending my First Amendment rights. They told us to leave. We’ve since moved to other spots in the park.
I only use my powers for good. I’m a psychic and a medium, as well as a witch. The most common spells I perform are love-healing and money/luck spells. These are followed by “road openers” (magic to help secure a new job, for example), “banishing candles” (to get rid of negative energies), and house blessings. I also do exorcisms, and changed one TV director’s life so much — drawing out an evil spirit that had been making him ill — that he got well and won an Emmy. (To protect his privacy, I won’t reveal his name.)
Meanwhile, this new public embrace of witchcraft makes me feel warm and appreciated. This week, I was buying a lot of dried fruit and bread from my local deli in the run-up to Samhain. When I told the owner that I needed them for offerings, he told me, “Happy Holidays!”
(I have recently had some experiences with Wiccans. We know a couple who come to the store and two who own a store further down Court St that specialize in herbs and homeopathic cures. We had them sage our store to clean out the evil spirits.
SM Stirling taught me a bunch about Wiccans in his Dies the Fire Emberverse books as a bunch of characters practice it. It seems a harmless fancy.
What is really interesting is that she is the daughter of Gabe Pressmen who was a New York TV reporter for about sixty years. You just never know how your kids are gonna turn out eh?)
Posted by Trooper York at 1:51 PM

Labels: NY Post, Things are not as they seem, witches

Well it did involve a goat. Just sayn'

Fired? Did they use real fire?

Probably should have kept her around as a scapegoat. When something goes wrong blame the witch like some primitive cultures do.

Probably no dumber than a lot of other religions.

But hey, if it makes you feel good and doesn't hurt anybody else, knock yourself out.

Probably should have kept her around as a scapegoat. When something goes wrong blame the witch like some primitive cultures do.

Like the Democrats will do if Witch Hillary blows this election?

I think the FBI guy will be the scape goat if she loses. They will try to destroy him. That is why I think there must be something big there or he wouldn't have disclosed it before the election.

If Huma fowarded classified emails from Hillary to her home computer that Carlos Danger was using to go to sex sites.....well that's the ballgame right there. They can both be indicted.

Wicca is merely what happens when Christianity tried to get user-friendly.

The Demos are going to freak if she loses, but that's not the worst of it.

A Trump Administration will have plenty of evidence to prosecute and it won't be hampered by all the "collegiality" between the Demos and the Whigs.

As for Comey, he's been letting the Ozark Mafia wiggle free for a long time on a number of issues. The idea Weiner's emails will turn up something ghastly means he was willing to let them slide because he's all mobbed up with the Global Slush Fund, but now it would require him up on charges of misfeasance in office at the bare minimum.

Comey's trying to save his ass, pure and simple, but the real sacrificial goat may well be the Beast herself, for being so slipshod in her dealings and so amoral in her attitudes (and we haven't even begun to know Willie's involvement).

And let's be clear about something. If she loses and the truth comes out, it may well mean a total reordering of the political makeup of this country because not only will a lot of Democrats have to answer for not doing anything when they knew what was happening (Nuremburg, anyone?), but also the Whigs, who were bought off by Tom Donahue and the CoC to go along to get along.

We've just gotten to the point where Pissy's name is being mentioned in the emails and now Lynch is pleading the Fifth on the Iran deal.

As they say in the movies, this could really go all the way to the top.

Huma signed OF-109 in her exit papers in which she swore under penalty of law that she turned over all classified material before leaving the State Department. If there were still classified emails on her shared computer she is in direct violation of the law and could be prosecuted. She is not going to take the hit for Hillary. No way. She either flees to Saudi Arabia or she flips.

How do you know she's a witch? She looks like one.