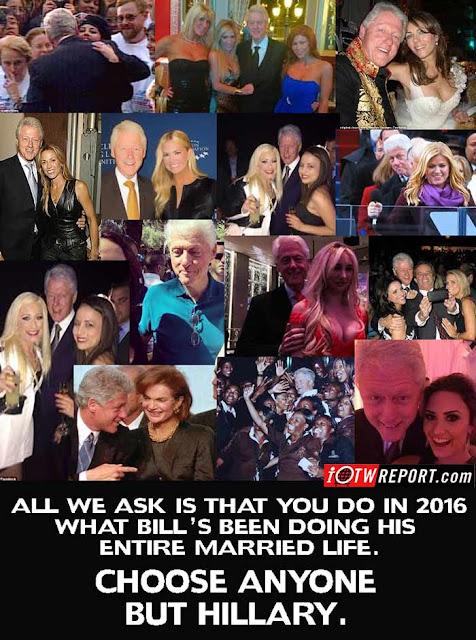 Wow, whoda thunk the Left would ever fire on one of its own sacred monsters?

Ha! He does look happiest when surrounded by pretty women.

So Bernie's saying a vote for Trump is fine with him?

Bill's defense is that He's a lover, not a fighter like Trump.

Bill will attend Trump's inauguration; Hillary will not. It doesn't seem fair, but what can be done?

Where did you come up with that?

Did you skip "CHOOSE ANYONE BUT HILLARY"?

"do what Bill's been doing"

"do what Bill's been doing"

Did you skip "CHOOSE ANYONE BUT HILLARY"?

lol so much for Bernie not going personal. But, business as usual, keep the masses occupied with bread and circuses.

I don't see how this hurts Hillary much. It even makes me a little sympathetic to her. The guy she married is a douche.

Are we sure this is "Bernie's Ad"? Did he endorse it? I can't keep up with all the details.

As for AllenS' and Meade's dispute: Yes there is a difference between being and doing. I think it's theological though -- love the sinner hate the sin, etc. Also, as a chemist, I've long been fascinated by the observation that the word "acid" is more a description of what a substance does rather than what it is. It's a subtle point suitable only for finer minds.

Yeah, as I sent it to my cousin I wondered if it was legit.

Look, Bernie Sanders is a fucking dud. He couldn't come up with humor if his life was on the line.

Calm yourself and get control of your emotions, Allen. I'm not humorless. Your "joke" is humorless. Find better jokes from better joke websites.

I'll tell you who's humorless: Lena Dunham. Someone that Althouse adores (and probably Meade too).

Titus is also humorless and also adored by Meadehouse.

You are the only humorless person we adore, chickelit. Only you.

Humor is subjective, Lawnmower Man. Most people would prefer not to think of Bill's peckerdildoes at all but they're not afraid to use it as an effective weapon against Hillary's complete lack of any integrity. It's becoming harder and harder (no pun) for her to present herself as anyone with any credibility or honesty and pointing out how opportunistic she is on the "women's crusader" card really hits her in the place where her guts would be, if she had any. Which she doesn't.

Seriously. Bernie is trouncing her in the young women demographic. They know she is a total phony. Highlighting the whole Bill thing and trashing the ladies he might have been a tad inappropriate with is as fair a game as can be played. It has the added bonus of devastating her ego, but that's because her ego is a phony one built around nothing other than identity politics and the political "alliance" she and he forged decades ago.

It's the last thing this country needs right now. If it can be smashed with humor, ridicule, insult, argument, whatever - no one cares. Her persona is a complete farce and it needs to be called out as such before the country is wrecked by it.

It's not my joke, Meade, you dumb fucking ass. I got it off of the internets. I did not produce it. Why can't you grasp that fact you humorless dumb fucker?

IOTW REPORTS.COM produced the joke. Can't anyone see that in the ad?

Do you see Bernie say I support this ad?

Like I said, Allen, calm yourself. You sent the lame joke to Lem after you got it off the internets. Fine. It's a sucky joke. Not funny enough to waste everyone's time with. Reflects a low sense of humor.

That's no reason to become abusive.

Your the one who got his undies in a bunch, Meade.

Chickie's not humorless. Even if he's not from quite the same place as this funny guy.

Impossible, Allen. I'm not even wearing any pants.

That's true. We know who wears the pants in Meade's house. And who doesn't wear them.

Only one person wears the pants at Meadehouse. And it's not Meade.

Given AA's aversion to male legs, how would she feel about you wearing a skirt, Meade? I mean, assuming you could make one long enough to not upset her.

I think you could get away with it. I mean, the Scots love kilts. And they maintain impressive lawns.

What "aversion to male legs"? Fat grown men wearing short pants look like big overgrown fat babies. Maybe you find that to be a sexy look but not everyone does.

Lol. I see her touchy tastes are contagious and have touched you off, too. How about... who cares? There are fat people everywhere in this fat land, male, female, old, young and everywhere in between. But some of us are a bit less Freudian and more fair and equal opportunity about our complaints, when we can be bothered to voice them. George Carlin, even! Talk about humorlessness!

Look, Bernie Sanders is a fucking dud. He couldn't come up with humor if his life was on the line.

That made me lol. That's the way I see Bernie Sanders.

We are not amused Off with your head.

That is the royal first person plural not amused.

What's the matter, Meadeseley? You have an uncontrollable urge to manscape the first tuft of man-meat you see?

Yes, they look terrible in that picture - pasty, too profusely sweaty and abominably unfashionable. But no one said fitness (or fashionable gym-wear) was a Southern thing. Mediterranean men do this stuff far better. I'm sure there are examples, but I wouldn't want you to feel that the Indiana-Wisconsin axis wasn't the epicenter of the universe or anything.

Pro-tip: There's a (possibly outdated, Freudian) theory that narcissists tend to run a bit same-sex in their interests anyway. (A consequence of them being "same person-oriented"). I wouldn't look to one of them types for advice on what makes the other gender sexy. She's not with you for that reason, anyway - at least for the most part.

that's hot, Balls. Thanks for that.