I did not catch this during the debate. I did catch a few good moments, especially from Chris Christie a couple of times, and I did see more nattering than I care for, especially between Bush and Rubio and between Rubio and Cruz. Kasich, I can't even. And as for CNN, that was mostly about the debate itself with such gems as Bob Beckel saying both Bernie Sander and Trump have the college crowd enthusiastic so now it's just a matter of ... wait for it ... wait for the stunning eclat of Beckel ... turnout.

Beckel for the win, among much more of the same astute analysis.

But between switching back and forth I did not hear mention of gun buyback program. This is a terrible argument to make against it, nice try but a terrible example to choose from the type of analogy. I see the remark is favored 29 times. That means at least 31 people do not hear the immediate stopping reply.

What will a liberal familiar with standard liberal tropes snap back at this? 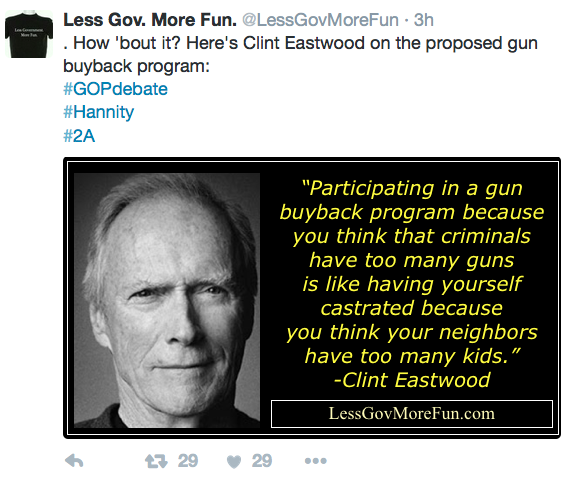 If people are this stupid, lets go ahead with the castration program. You first-- leftists and Islamonazi.

Wow, what is Eastwood, in his 80's? Still handsome.

Liberals see ordinary people as benighted neanderthals who are inherently dangerous. Ergo the passion to take their guns away. Simple as that.

Hah! I LOVE that! Made my day.

Thanks for posting Clint!

A lot of people have rusty old firearms in the attic--souvenirs of their grandfather's time in the Pacific or whatever. They'd be afraid to fire these weapons, and where you would go to get ammo for a WWII Japanese pistol who even knows. Such a buy back program offers such people the money to buy a new, more reliable weapon. Don't think of it as a buy back program. It's more like a rearmament program.