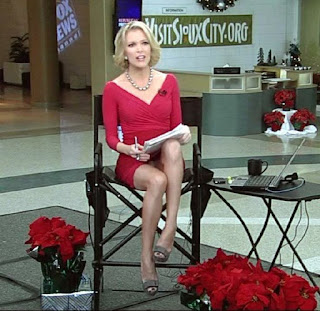 Megyn: You know I don't like to wear any underwear, don't you, Nick?
Posted by Trooper York at 6:29 PM

Pervs. Can't a woman cross her legs while wearing a short, skin-tight dress without being magnified?

Arrest me for smoking?

Or just being smoking hot?

"Oh Donald, come here. I want to show you something."

It's easier for me to imagine the Blonde sharing a laugh or insight with Ed than giving him a bitch slap for smoking or being himself.

However, Megyn, appears to keep setting herself up for a whack of some kind or another. The black sleeveless Barbie style dress she was decked out in the other night while chatting with Michael Moore (who was wearing a hooded sweatshirt ) gave the impression someone was hot and it wasn't the overweight guy this time around.

The number one rule from Megyn's appearance oriented list of things not to say to a preganant woman:

Don't comment on our bodies. Ever. Really...Whatever our bodies look like, it's our business. As for your thoughts? Keep them to yourself.Consider this age-old chestnut instead: "you look great."

Which means the tasteful reply to this crossover gap would be an appreciative "You look great". Because really, don't comment on her body. Ever. Even if she dresses and acts as though she wishes you would.

How did we get to this point?

The Blonde would kill me if she caught me smoking.

It should be a crime to willfully neglect one's legs so.

*LE SIGH*. /holds back of hand on forehead. /Looks for someplace to do a twirling downward spiral faint. /Faint executed.

Why do things suddenly appear
From my mouth, not my rear
Just like me, I long to be, a little full

She could use a couple of double cheeseburgers daily.

Legs are too skinny.

She has an amazing body. I fucking love her. I would totally do her and I am a fag

The problem, Titus is that that you would "totally do" Sarah Jessica Parker and probably Lena Dunham too.

The problem...is that that you would "totally do"...

Don't stop there, chickelit. Go all the way. Add Hillary Clinton to the list. Her lying alone adds an element of camaraderie and titillation that's close to irresistible.

Megyn Kelly, at forty five years of age, cultivates an image that tends more toward hot young twenty-something than that of a dynamic confident mature woman who knows how to utilize her sexiness and beauty to complement her roles of wife, mother, and journalist and imbue them with vitality. She sends a mixed message rather than a balanced one.

I am sorry-I'm guilty I love Megan Kelly-she is fierce and hot-I appreciate that.

I wouldn't do Hilary or Lena though.

they have to be thin and toned and in shape.

"Don't stop there, chickelit. Go all the way. Add Hillary Clinton to the list. Her lying alone adds an element of camaraderie and titillation that's close to irresistible."

that made me fuck up Mama-I am in my corner office right now looking at the Hancock Building.

that made me fuck up Mama-I am in my corner office right now looking at the Hancock Building.

I'll believe you're in corner somewhere, Titus -- doing something having to do with a hand and a cock.