ndspinelli said...
Just like the moon landing. I was teaching high school history after that stupid fucking "documentary" came out that the moon landing was really just staged on a movie set. Many impressionable minds bought the horseshit.
January 31, 2016 at 1:46 PM

"Diamonds Are Forever" was a great come back for Sean Connery. My late father believed that all subsequent Bond actors were phonies. Too bad he didn't live to see Daniel Craig.

The film also featured Jill St. John who was more coax than hoax. 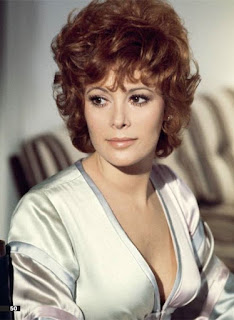 Posted by chickelit at 2:05 PM

I forget what "Diamonds Are Forever" was rated in 1971--those were still the days of G, M, and X. It was probably rated M. Didn't matter, my dad thought it appropriate to take me (aged 11) and and my brother (13) to see it when it came out. Of course my mother declined to go.

I did like Timothy Dalton, he was the only one who made Bond look like a Naval officer.

I forget what "Diamonds Are Forever" was rated in 1971--those were still the days of G, M, and X

It was probably M. Unless you were remarkably sheltered, nothing in there an 11 or 13 year old couldn't see.

I have to rate Jill St John as just about the worst of the Bond girls.

She only beats out Maryse Guy Mitsouko and Angela Scoular.

That's OK Troop. We often disagree on hotness factors. Tastes are subjunctive, just like in music.

Hey, I just learned that Crispin Glover's father played one of the bad gays in this scene. The resemblance is uncanny.

She only beats out Maryse Guy Mitsouko and Angela Scoular.

Oh, no, Angela Scoular, poor girl, had the wench thing down perfect.

Once you got past Molly Peters, she was the lustiest until you go to, um...

that cake had a bomb in it. cool. (bart simpson voice)

What kills that look for Saranadan isn't her cleavage, it's the horizontal lower line of the bra. It just looks cheap and more appropriate for an adult video awards gala.

Who does Susan think she is? Sue Ellen Mischke?

Ugh! The worst Bond girl was Judi Dench as Auntie M. ( Don't blame me she claimed the Bond girl title in a Bond Girl Special). She was so incompetent she could have been the US Secretary of State. Bond shot the wrong girl in The World Is Not Enough. But she did give Skyfall a happy ending.

Daniel Craig should stick to something he's suited to, like playing Popeye.

Here's the thing. Sarandon shouldn't have done that at the SAG awards. Just sayn'

The same people who think the moon landing was faked and Bush was responsible for 9/11 are lining up to vote for Bernie due to the incontrovertible economics logic and/or Hillary due to the incorruptible public service.

But then, full disclosure, I think Judi's hot.