"New York City To Allow Public Urination, So Minorities Can…" 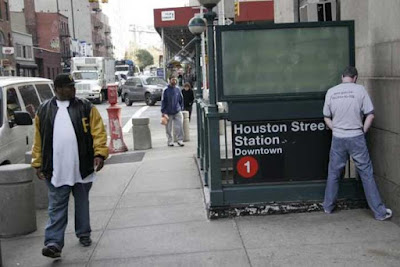 
Urinating and drinking in public would no longer be treated as crimes under a package of bills New York’s City Council will consider to ease enforcement of quality-of-life offenses that lawmakers say clog the courts and have been disproportionately enforced against minorities.

The council scheduled a Jan. 25 hearing on the proposed laws, which are supported by Council Speaker Melissa Mark-Viverito, a majority of her 50 colleagues and Police Commissioner Bill Bratton. The proposal would remove the possibility of permanent criminal records for public urination and violating park rules, mostly treating them as civil offenses, along with public drinking, littering and excessive noise.

Such low-level offenses have left the city with more than 1.2 million active warrants, according to a fact sheet distributed by the council Wednesday.

According to the New York Times, one liberal official who sponsored this change noted it was designed to help minorities “reach their full potential.”


“We know that the system has been really rigged against communities of color in particular,” said Ms. Mark-Viverito, who has promoted such reforms and is the main sponsor of the bills. “So the question has always been, what can we do in this job to minimize unnecessary interaction with the criminal justice system, so that these young people can really fulfill their potential?”

Only an unmitigated leftist would dare to compare public human shitting and pissing as allowing minorities to reach their full potential. You can't make this shit up and the are going to be pissing in the wind on this one. Trooper York wasn't available for comment on the continued skell invasion.

Wait! That guy is white!

No more stop and frisk, either. I sense a connection.

It's not decriminalization, but allowing officers to make the call on issuing a ticket, I gather. Raise your hand if you've never urinated downtown. I didn't think so.

"Offenses covered by the legislation would not be decriminalized, as critics had accused the City Council of seeking to do when the proposal emerged last year. Instead, officials said, the bills, known collectively as the Criminal Justice Reform Act, seek to balance the goal of fairer punishment, laid out by Melissa Mark-Viverito, a Democrat who is the Council speaker, with the Police Department’s desire to maintain the discretion that officers use in making arrests, for even seemingly trivial offenses, when they deem it necessary."

And just to save time, I'm not endorsing public urination.


We have a local Marti-Gras, I believe that we are 2nd in size to NOLA, lots of drinking people, never enough porta-potties. City changed the old 'public urination' misdemeanor into 'lewd sexual exposure' felony. And with the sex crimes registry they have now ruined hundreds of lives who now must register with the police as a sex criminal, cannot live withing 300 yards of a school, etc etc. all for taking a wizz behind a dumpster when they were 22 and at a street festival.

I'm for letting the cop make the call based on the situation and circumstance.

If Obama had a son, he'd pee on the street.

Allowing public urination is sexist. Guys can just zip into an alley, as Paglia put it in Sexual Personae.

So it has to be okay for women to squat if they want too, to reach their full potential...

If you thought Taxi Driver was a great world to live in, you should love the changes under DeBlasio.

It's always a good sign when the government actively tries to turn a major US city into a toilet.

Did anyone raise their hand?


I confused by the story, and I think it may be intentionally being misconstrued. If the real issue is that a ticket for public urination leads to a court argument because it includes a rap sheet, then I understand why people would fight this. The change seems to infraction from a crime to a civil charge. The police can still write a ticket, but now you have to pay a lawyer to fight a fine that is likely cheaper. I doubt this will change much, but it should free up the criminal court side (by offloading to the civil court side). I think street enforcement will stay the same.

Still, New York appears to be a literal shit hole, so I see no reason to visit.

“We know that the system has been really rigged against communities of color in particular,”

Right....because colored people just can't help but piss in public, drink and get drunk in public places, can't stop littering, breaking windows, stealing wheels off of cars and all sorts of things that us people with white privilege seem to be able to restrain ourselves from.

Poor poor uncivilized colored people. We certainly can't expect them to act within the rules of public decency. So....we will change the laws and make it much easier.

Next. Lift the ban on public sex, pooping in the park, dosing up on heroin on the street corners. They can't help it....right?

And yes...New York City is a complete shit hole that I would never visit. San Francisco is too with literal crap, vomit, piss everywhere. Too bad, because it was a pretty nice city, except for certain districts where the homeless, bums, beggars and muggers lived. Now....it is everywhere.

I am too. The police should be able to discern who is just desperately taking a whiz and who is a habitual pisser/pooper. Time and place counts. What is objectionable is to make it a racial/racist thing. EVERYTHING is racist, evidently.

People w/ diabetes have to piss on a moments notice. I've been in that situation.

"I've been in that situation."

How did you handle it?

"Little cat you're just like me, you go outside, and squat to pee."

Bob's Burgers is a quality show. Especially if you're a big kid who's a sucker for cartoons.

Also warning on an irritable voice in the video.

I've never urinated in public. Ever. It's demeaning and uncivilized.

Not even on the side of the highway, Meth? I've done that when I knew I couldn't hold it in much longer and the next exit was 15 miles down the road.

I have urinated and shit in public. I had to shit about 8 months ago walking home from work in between two fabulous brownstones on Mass Ave-it was more spray than shit-and i had no tp.

I just think it is interesting that the guy in Lem's pic, on casual glance, looks to be pissing in the corner, but look a little closer and he's basically pissing on the heads of any coming in or out of that subway station. Raise you hand if you enjoy golden showers!