"This Toad Isn’t Eating a Bug. The Bug Is Eating It" 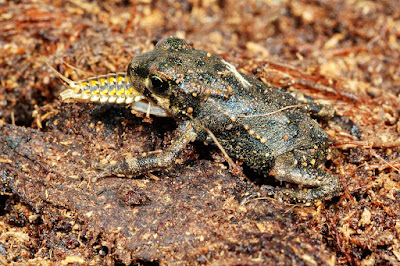 Wired: As larvae, beetles of the genus Epomis actually entice frogs and toads and salamanders to attack them, then whip around and sink their huge, hooked jaws into the attackers, slowly draining the life out of them. When the larvae transform into adult beetles, they get right back to it, only now they dispatch amphibians even more brutally. Like, a kind of brutality that involves snipping a frog’s leg muscles so it can’t escape....

In fact, it starts digesting your [frog's] tissue. But strangely, none of your blood is coming out, and indeed “when you slice a larva open you don’t see it full of red blood,” says Gil Wizen, an entomologist at the University of Toronto. What’s probably going on here, Wizen reckons, is the larva is secreting enzymes onto the toad to melt its flesh. “So you can say that the digestion is already beginning before the food enters the mouth,” he says.


All the while, you go about the life of a toad. You take a swim and gobble up insects. You will not, however, turn into a prince, because after two days, you’re so weakened you can no longer move. It’s at this point that the larva enters what Wizen calls “the predation stage.”

The larva begins chewing more, says Wizen, “and what we see is that it sort of tears tissues from the amphibian’s body. After a few hours the amphibian is reduced to just a pile of bones and just a little bit of skin.”

But this was no crime of passion. The larva is more like a serial killer. Over the course of its development, it can take down as many as nine toads, frogs, newts, or salamanders.....

And like a serial killer, its methods grow ever more complex as it matures. The adult beetle ups its game into some seriously sadistic stuff. (read more)

Via Instapundit
Posted by Lem at 8:30 PM

Labels: animal kingdom, what you don't know can hurt you

This is why I no longer pick fights with little girls half my size. I used to have quite record though, 9-0 until that one day.

The worst thing about looking at nature in action is knowing we're a part of it.

And we like to make up metaphors.
Also, metaphor alert.