So for all of you purists who think Trumps Veteran Event is a cheap stunt.......what do you think about Cruz and Carly's repsonse? 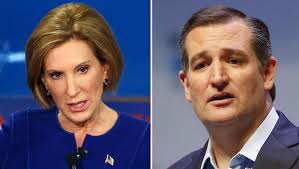 So Trump is going to have an event to raise money for veterans tonight instead of going to the Fox Debate. Questions are being raised about where the money is going to go. Which is absolutely right and proper. Charitable contributions often are siphoned away for administrative costs and other bullshit. Trump  has to know that he will be thoroughly scrutinized over this event and I bet that it will all be on the up and up. He is too smart to get caught not producing the money to the reputable charities. I bet it will go to the Fisher House as he has contributed to them many times in the past.

Now Cruz has come up with his own wrinkle. Two of his corrupt political PAC's have offered a $1.5 million dollar contribution if Trump agrees to a one on one debate. Carly jumped in and offered the same amount if she is included. Obviously they really care about the Wounded Warriors.

If anyone wants to call this charity stuff a political stunt that uses the vets well this is even worse than Trump. I mean Trump is just raising money. Sure he is using it to make Fox look bad but he is not holding money hostage. Cruz and Carly have the money but are holding it out as bribe. If they want to donate to the vets they should just do it. I don't even know if this is legal. Can a PAC use it's money that was given for political purposes transform it to charitable contributions? I guess they can but it is pretty low rent to use it as a carrot to get a debate. Of course FOX and the rest of the Trump haters are not going to see it that way. They will not criticize Cruz the way they eviscerate Trump on this issue. It is all a rigged game by the Duopoly.
Posted by Trooper York at 6:17 PM

Labels: Donald Trump is a douchebag but he is our douchebag, Ted Cruz is a nice guy because after all he is a Canadian

Yeah, that's really skeezy...and I bet Trump will call them out on it and make esp. Cruz look like a total creep. Give it up Carly, you're done.

Another poll came out today showing Trump pulling away.

Whether it's accurate or not, Cruz has to be worried it looks like he's losing, so he tries a stunt that will put him on the same footing as Trump.

He's thinking, but Trump seems to be too good a tactician to put himself down a notch.

Followers, not leaders.
But they sure can talk up a storm.

Don't forget The Huck and Santorum. They're broke, but they'll show up at Trump's event anyway.

It's weird how questionable or bad things that politicians do are only good when Trump does them.

Who is the only Republican candidate has done the following:

Called for: single payer health care
Amnesty
Path to citizenship for illegals
Supported: Obama
Bill Clinton
Hillary Clinton
Abortion
Partial birth abortion
Higher taxes and a more progressive tax system
Gun control beyong current law, including an "assault weapons" ban
Used Kelo-style eminent domain to steal private property from citizens.
Hired illegal aliens in huge numbers instead of Americans for his projects
Got fined 1 million dollars for it.
Insulted the service and sacrifice of a Vietnam POW, who refused to abandon his men despite years of torture.
Calls prominent women names like a college frat boy in public
Had a child to his second wife while still married to his first
Is rejected by every serious conservative for obvious reasons.

That's just of the top of my head without opening Google.

What other Republican has a record of leftism, non-conservatism, and general asshatery anywhere in that ball park, even if you add up everything they ever did in their lifetime?

Our douchebag my ass. Not mine. Just a douchebag, period. And people care about FOX, Megan Kelly, and cheap stunts? Put down the crack pipe, get a hold of yourself, and get serious. This is not a reality show. You're just as much of a mark as the Obama fans were. Slightly modified con with different marks, but the same snow job.

I was seriously open to him as an alternative, but I never drank the cool-aid. I opened up the package to see what was in there first, and everyday it gets worse. I've gone from open-minded excitement about his potential to now where I consider him the worst of the entire Republican field. But, I'm just one vote.

As to his main claim to fame: business success and competence: He could have put his inheritance in an index fund and never touched it or thought about it his whole life and his net worth would be about the same. A mediocre stock investor with a few hours a week would have outperformed him. In other words, he's mediocrity with a big mouth. I had to learn these things about Trump, do some research, think about it, and change my mind. Did you do any of that before signing up for the fan club?

What's a guy gotta do around here to get banned - marry a law professor?

I bet everyone in here has a better return on what they started with than Trump does. You want see an actual successful American - look in the mirror.

Only the ones who inherited $40 million are eligible.

"They're broke, but they'll show up at Trump's event anyway."

Well, its not like they have anything else to do.

"Will attend fundraisers for food"

Bags - We know who your against. Who are you for?

Its not a referendum on Trump. We're going to nominate one Republican. So if not Trump, then who?

I said unequivocally tonight that after study, I'm at the point of anybody but Trump..., except Hillary or Sanders, who have supported all the same things, but are also crazy people. I don't think Trump is crazy. I'm fine with Christie, Rubio, or Cruz. Cruz is best on my issues, but Christie is most electable in the general. Yea, of course you can find issue with any of them, but none of them have supported the opposite of my values across the board.

Fuck it, I'll take the money and they can have the debate at my house.

I've said before that only Cruz and Sanders have fought the failed D.C. and media establishment, but I should have included Rand Paul. He is also one of the few people fighting for real sustainable change that won't be reversed by a rebound from silliness in four years.

Don't forget The Huck and Santorum. They're broke, but they'll show up at Trump's event anyway.

But they are rich in spirit. or something.

Well, Sanders is the silliest of all, but he is fighting the establishment.

With a half century as the period, it actually is.

And Trump's net worth is less than half that according to everyone except Trump, but why would he exaggerate, right?

bagoh20 said...
What's a guy gotta do around here to get banned - marry a law professor?

I would never ban you bags. I am very sympathetic to the retarded.

I am going to send you a ribbon and everything.

Thanks' Troop, but send two, one for Trump hiding behind my wheelchair.