It is a small category with some strange entries and it cleared a few misapprehensions. This whole time I thought Gallimaufry is Dr Who's home planet, and I'd guess wrongly gamine is cell that fuses with another for sexual reproduction, and if I had to guess I'd say a garrigue is a rope that twists to choke somebody to death and I would have guessed grubstake to be a chuck wagon meal poker bet made by a cowboy. All wrong.

I found a few odd files in here too under g, recipes for things beginning with g, a list of some 20 links to grasshopper pop-up pages, a fictional autobiography story of Genghis Kahn (and myself) included with my rent to amuse a woman who would see it.

gabion: a cage, cylinder, or box filled with rocks, concrete, or sometimes sand and soil for use in civil engineering, road building, and military applications. For erosion control, caged riprap is used. For dams or in foundation construction, cylindrical metal structures are used. In a military context, earth- or sand-filled gabions are used to protect artillery crews from enemy fire.

gallimaufry: a confused jumble or medley of things. dish made from diced or minced meat, especially a hash or ragout.

gamine: a homeless girl who roams the streets. a girl of impish appeal . Gamine is a French word, the feminine form of gamin, originally meaning urchin, waif or playful, naughty child.  a female street urchin; a mischievous, playful, elfish, pert girl or young woman; having a boyish, mischievous charm; tomboyish

garniture: a set of decorative accessories, in particular vases.

garrigue: or phrygana is a type of low, soft-leaved scrubland ecoregion and plant community in the Mediterranean forests, woodlands, and scrub biome. It is found on limestone soils around the Mediterranean Basin, generally near the seacoast, where the climate is moderated but with annual summer drought. (See Mediterranean climate.) The term has also found its way into haute cuisine, suggestive of the resinous flavours of a garrigue scrubland. Like Colorado. 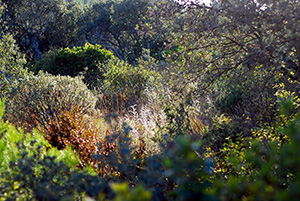 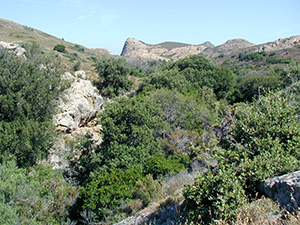 garrulous: chatty: full of trivial conversation; "kept from her housework by gabby neighbors". Prolixity (from Latin prolixus, "extended"; also called wordiness, verbosity and garrulousness) in language refers to speech or writing which uses an excess of words. Adjectival forms include prolix, wordy, verbose, and garrulous.Excessively or tiresomely talkative; Excessively wordy and rambling

gaslighting:a form of psychological abuse in which false information is presented with the intent of making a victim doubt his or her own memory, perception ...

gemütlichkeit: a German abstract noun that has been adopted into English.Its closest equivalent is the word "coziness"; however, rather than merely describing a place that is compact, well-heated and nicely furnished (a cozy room, a cozy flat), Gemütlichkeit connotes the notion of belonging, social acceptance, cheerfulness, the absence of anything hectic and the opportunity to spend quality time.

genocidaire: Génocidaires, from the French for "those who commit genocide", are those guilty of the mass killings of the 1994 Rwandan Genocide, in which close to 1,000,000 Rwandans, primarily Tutsi, were murdered by their Hutu neighbors.

gestalt shift: those pictures that shift from one thing to something else entirely depending on how it's viewed. gestalt: the whole is more than the sum of the parts. Gestalt psychology tries to understand the laws of our ability to acquire and maintain meaningful perceptions in an apparently chaotic world. The central principle of gestalt psychology is that the mind forms a global whole with self-organizing tendencies.

gibbet: a gallows-type structure from which the dead bodies of executed criminals were hung on public display to deter other existing or potential criminals. In earlier times, up to the late 17th century, live gibbeting also took place, in which the criminal was placed alive in a metal cage and left to starve to death.As well as referring to the gibbet as a device, the term 'gibbet' may also be used to refer to the practice of placing a criminal on display within one.This practice is also called "hanging in chains"

Gjallarhorn: Norse mythology, Gjallarhorn (Old Norse "yelling horn" or "the loud sounding horn") is a horn associated with the god Heimdallr and the wise being Mímir.

gleet: chronic inflammation (as gonorrhea) of a bodily orifice usually accompanied by an abnormal discharge; also : the discharge itself

gleichschaltung: an example from the early days of the Nazi dictatorship of this use of language to manipulate and confuse. It is a word rarely to be found in older German dictionaries. ‘Gleich’ means equal, ‘Schaltung’ means switch, as in an electrical switch; Gleichschaltung therefore means switching on to the same track or wavelength, or, to put it in one word, alignment or co-ordination. It became, in 1933, the word for the process by which all organizations and associations existing in society were nazified and some, such as the political parties and the trade unions, were simply suppressed. The word was meant to hide the fact that what was going on was in flagrant breach of all previous notions of freedom, civil rights and self-government. It was a way of glossing over the threat of terror and violence that compelled individuals and organizations to come to heel.

glissando: Playing the notes of a musical scale in order rapidly within a piece of music. The effect is a rapid sweep up or down the scale.

glossolalia: The power attributed to persons in some religious groups, of ‘speaking in tongues’ecstatic utterances usually of unintelligible sounds made by individuals in a state of religious excitement. Religious revivals are often accompanied by manifestations of glossolalia, and various Pentecostal (see Pentecostalism) movements cite for authority the Acts of the Apostles, which records that on the day of Pentecost the Apostles "were filled with the Holy Spirit and began to speak in other languages as the Spirit gave them ability." There are other New Testament references to the phenomenon. The Corinthian believers overvalued the gift; Paul in 1 Corinthians encouraged the orderly use of the gift and "interpretation" of the utterance so that all might be edified. In Acts, however, the use of the gift produces speech in other human languages as a kind of reversal of the confusion of tongues produced at the Tower of Babel.

gneiss:(also known as "bastard granite" or "stratified granite") is a common and widely distributed type of rock formed by high-grade regional metamorphic processes from pre-existing formations that were originally either igneous or sedimentary rocks. Gneissic rocks are usually medium to coarse foliated and largely recrystallized but do not carry large quantities of micas, chlorite or other platy minerals. Gneisses that are metamorphosed igneous rocks or their equivalent are termed granite gneisses, diorite gneisses, etc.

goa: Goa trance is a form of electronic music that originated during the late 1980s in Goa, India.

gob it out: spit it out

Gohan-desuyo: famous Japanese seaweed paste, boiled with soy sauce, and served on hot rice. Since the flavor is so perfect for rice, you can eat a lot of rice with it and needn’t other side dishes. Many Japanese love it.

golfclap: the clapping you hear in golfing tournaments. Generally people clap because of courtesy, and tradition, so it lacks any real feeling of excitement.

Götterdämmerung: twilight of the gods, from Götter, plural of Gott (god) + Dämmerung (twilight). Götterdämmerung was the name of the last of Richard Wagner's four operas titled Der Ring des Nibelungen (The Ring of the Nibelung). The German word Götterdämmerung is a translation of the Old Norse Ragnarök which in Scandinavian mythology refers to the destruction of the gods in a battle with evil, resulting in the end of the world. The term Ragnarök is from regin (gods) + rok (fate, course) confused by some with Ragnarökkr (literally, twilight of the gods).

gougere: this is a misfiled recipe for little cheese puffs.

goujons: normally refer to small strips of delicate white fish like sole, that are breaded and deep-fried. In an effort to reduce fat content of meals, you’ll find that many modern recipes for these are now baked instead. Further, it’s quite common to see chicken goujons, which we might better know as chicken fingers, chicken nuggets or chicken tenders. In fact, if you or your kids order chicken strips at restaurants frequently, you’ve probably been eating goujons without realizing it, since they’re seldom called by this name in the US.

Grand-Guignol: "The Theater of the Big Puppet") — known as the Grand Guignol — was in the Pigalle area of Paris (at 20 bis, rue Chaptal). From its opening in 1897 until its closing in 1962 it specialized in naturalistic horror shows. Its name is often used as a general term for graphic, amoral horror entertainment, a genre popular from Elizabethan and Jacobean theatre (for instance Shakespeare's Titus Andronicus and Webster's The White Devil) to today's splatter films.

grandee: a man of high social position or eminence, especially a Spanish or Portuguese nobleman.

gravamen: a complaint or grievance, the ground of a legal action, and particularly the more serious part of a charge against an accused person. In legal terms, the essential element of a lawsuit. In English the term is used chiefly in legal submissions and judicial opinions. The word is commonly misspelled gravaman.

greige: A colour between grey and beige, closely akin to taupe; Unfinished; not fully processed; neither bleached nor dyed. Knitted or woven fabrics of all fibers in an unfinished state, after they have been woven or knitted and before dyeing or finishing. Unfinished or “loom state” textiles, coming from a mill or knitter. Various “finishing” procedures follow like bleaching, dyeing, printing ...

grifter: swindler: a person who swindles you by means of deception or fraud Grifter is a fictional comic book character from Wildstorm Universe. He is best known as a member of Jim Lee's WildC.A.T.S. A con man. Someone who pulls confidence games. Grifting - A confidence trick or confidence game (also known as a bunko, con, flim flam, gaffle, grift, hustle, scam, scheme, or swindle) is an attempt to ...
griot: or jeli (djeli or djéli in French spelling) is a West African storyteller, praise singer, poet and musician. The griot is a repository of oral tradition. As such ...

grubstake: money or supplies advanced to a prospector in return for a share in any findings, money advanced for any enterprise

gurn: a distorted facial expression, and a verb to describe the action. A typical gurn might involve projecting the lower jaw as far forward and up as possible, and covering the upper lip with the lower lip. "to snarl as a dog; to look savage; to distort the countenance," may originally be Scottish, related to "grin." In Northern Ireland, the verb "to gurn" means "to cry," and crying is often referred to as "gurnin'." also used to describe the jaw-jutting facial expression of people under the influence of some drugs, including ecstasy and methedrone.

gusset: piece of fabric sewn into corners such as armpits and crotches for extra give.
Posted by Chip Ahoy at 3:11 AM

More of those words in common use about 50 years ago.

We've all known each other for a long time, so it's appropriate that I inform of a wonderful G-word

My dad's was Glenwood, a name I love, and I never knew anyone else with that name.

Scotish derived from Gaelic "gleann" meaning "valley", and thus "wood of the valley".

When Monet got bored with the Ile De France he went on a painting trip to that part of France which is called Le Massif or Le Massif Central, basically high and dry country, it's inland from Provence, and he executed some great paintings of garrigue type vegetation.

There's a restaurant about a mile from where I live called Glenwood Pines. Decent food but the real draw is the view of Lake Cayuga.

Should read "gimlet eyed," not "gimley-eyed." (A gimlet is a small hand-auger.)

"Gimley-eyed" means having low, bushy eyebrows, like a dwarf.

Mumpsimus! Well spotted. Changed, thank you. (There are two cards for that)