A look back: Laura Bush's Diary 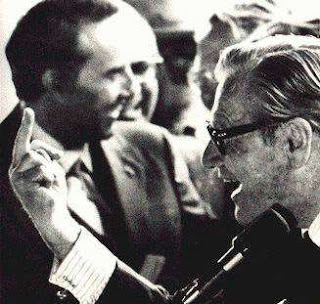 So I was in the sun room getting a bikini wax from Jeb’s daughter when W burst into the room. You see Jeb’s girl learned all about that from the time she was in prison for the drug thing and took up with this hairstylist girl from Oakland and all. Plus her momma worked in a salon in Tijuana before she hooked up with that sumbitch Jeb. She was a shampoo girl and they said she could really manipulate a hose if you know what I mean.

Anyhoo W burst in all hot and bothered. “Laura you won’t believe what just happened?” “What did they take a picture of Barry bowing to the Chinese take out delivery guy again?” “No, Bubba had a heart attack and they rushed him to the hospital…maybe you should give Hil a call?” “Oh that’s terrible W…I will get on the hotline right away.”

Now most people don’t realize that Hil and I have become pretty good friends over the years. I mean she used to attack us and criticize W all the time when she was Senator but that was all political bullshit that we didn’t take seriously. You see we had an unbreakable bond because of the First Ladies Traveling Underpants. When you share a secret that goes back to the founding of the republic you can gloss over little things like political posturing and sound bites. When the rubber hits the cootch you know that you have more in common than most and can understand the other girl’s point of view.

So I got on the phone and after a few minutes I got Hillary on the secret line. “Hil what happened? Is Bubba ok?” “Oh he’s fine that big phony” Hillary said. “He just got himself all excited because he was hanging out with those bitches from the Jersey Shore and Snookie got in the hot tub with him and took off her top. Then he grabbed his chest and they took him in for test.” “I heard they had to put in stints.” “Yeah they put stints in his dick the bastard. The Viagra is starting to wear off and he needs the stiffener if you know what I mean. I am so glad I switched teams.” “What did you say Hil?” “Oh nothing just that I had to root for the dog ass Jets this year. I might have to go back to New York you know if fucking Urkel doesn’t give me something to do soon.” “Oh I am sure you will be alright. Don’t sweat it.”

I went into the library to tell W and his Dad what had happened. Poppy and the bug eyed twat were visiting again and they were hanging out in the study as far away from nasty old Barb as they could. Luckily the Luche Libre from Mexico was on and she was eating chicken wings and drinking PBR in the family room. So that would occupy her for a while.

“Don’t worry boys, Bubba is fine. He just got a little excited cause he was fooling around with that bouton Snookie in the hot tub and had a little accident. But they fixed right up and everything is fine.” “Thank God” said Poppy Bush. “I would have hated to have to go through the same thing we had to do with Rocky.” “What’s that Dad” said W. “Have to sit through six sequels that get progressively shittier?” “No, not that Rocky, you know Rockefeller. Nelson Rockefeller. The governor of New York back in the day.” “What are you talking about Pop” I said. ”I bet there is a good story attached to that.”


“Why sure there is. You see back in the day Nelson had just come off being Vice President in the Ford administration and was thinking of not running again. But he had the big bucks and we were all sucking around him hoping for his endorsement and maybe some of that illegal walking around money that got him elected twenty times as governor of New York or whatever. He hated Reagan with a passion and we were all trying to get his approval. Now Rocky was a cock hound from way back. He used to love to bang anything that walked. Or crawled for that matter. He liked them young. He was just about the first politician to ever get divorced. So one night Bob Dole and I went up to see him. It was between the two of us who he would endorse. So we figured we would see him together and whoever lost would make the other guy his Vice President. We get to the apartment and ring the bell. There is no answer. We bang on the door. Finally this young chippy that was his “assistant” Meghan something or other answers the door. Stark naked. My goodness she was a hairy young thing. The thing I looked at looked like Fidel Castro eating a ham steak. Anyway she started wailing. ‘He’s dead, he’s dead.” Bob goes “who?” “Nelson. He’s stiff as a board. He never gets stiff. Oh what are we going to do?” So we go in and sure enough Rocky is deader than John Edwards’s career. Plus he is wearing a bra and panties and a butt plug. This woman is wailing and the situation is going south in a hurry. So Bob slaps her across the face. Not to shut her up, he just likes to do that. Anyway we tell her to get dressed and we take all the stuff off Rocky and get him dressed. Only Bob is all fucked up with his one flipper there and he puts Rocky’s shoes on the wrong feet. Anyway we call the cops and they come in and take the report. Luckily Benjamin Ward was the Commissioner at the time and we had some photo’s of him in a three way with Eartha Kitt and Soupy Sales. So he hushed it all up. Even the shoes on the wrong foot thing didn’t come out. And they came up with a great explanation of how he died in a young girl’s apartment.”

“What was that Poppy” I asked.

“Why he died of high blood pressure. Seventy over thirty.”
Posted by Trooper York at 5:52 PM

Labels: bob dole tells you how to get elected President, Laura Bush's Diary, Old Trooper York posts he can put up without doing a lot of work

Before I ever scroll down to see who wrote these posts, I can always tell a Trooper York screed.