A Canadian First Nations tribe used 2.5 million of their own money to restore their salmon runs, an integral part of their heritage. The tribe collectively decided to use the money to support a project by American entrepreneur Russ George in which iron-sulfate is dumped by the tons (120) to produce a bloom of phytoplankton in an attempt to sequester carbon. 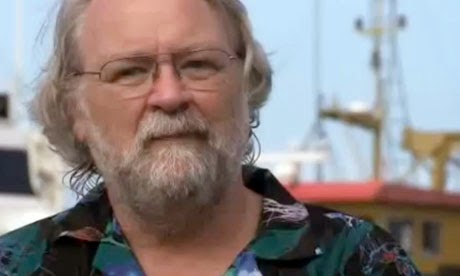 Two goals. Restore salmon runs, and sequester carbon. Like chocolate and peanut butter smacking into each other and making a Reese's candy cup.

Then things feed on salmon. Bird populations are enriched. Other fish species, tuna, even whales turn up.

How does carbon become sequestered though when it appears to be consumed?

Not all the zooplankton is consumed. If the bloom is too large they starve and die. If the species are diatom type that produce shells then carbon dioxide becomes sequestered in their calcium carbonate shells that settle on the sea floor.

The story is told backwards in Reverseland, where good things are bad. This is the prevailing version.


George was the guy who persuaded the small impoverished indigenous community of Old Massett on Haida Gwaii to part with over $2.5-million. He did so under the pretense that dumping iron in the ocean to stimulate a plankton bloom would net lucrative profits in the carbon credit market and maybe even bring back salmon stocks. Huffington

George is the guy. George is the guy who looks for solutions to problems that do not involve courts and governments and environment activist groups hellbent on limiting human activity. George does, the rest obstruct.

It is the kind of bloom you do not want in your aquarium. The project fraught with hazard. There are serious and valid arguments against this type of activity. The type of bloom cannot be controlled, nor the extent fully known nor understood. The scientific community agrees much more study is needed before any large project be undertaken. They are against these types of geoengineering or marine-engineering activities, treaties are signed over this, it violates the London Convention for instance and a whole array of legal arrangements and regulating restrictions. By incorporating with the First Nation tribe Russ George bypassed all that legal claptrap and that sidestepping action infuriates ecologists.

Environmental groups object to the commercial aspect. It involves carbon credits and they astutely observe a scheme when they see one. How dare he fix a problem that needs to stay unfixed and make money besides, by fixing and not by obstructing human activity.

According to this article the jury is out. The project a success and spectacularly too. Far greater salmon increase than anticipated or imagined. National Review

Now it is being reported that everywhere from Alaska to the lower 48, baby salmon that swam out to sea, instead of mostly starving were treated to a feast on newly vibrant ocean pastures where once they could neither thrive nor survive. They grew and grew and before too long they swam back to our rivers a hundred million strong.

The SE Alaska Pink catch in the fall of 2013 was a stunning  226.3 million fish. This when a high number of 50 million fish were expected. Those extra ocean pasture fed fish came back because their pasture was enjoying the richest plankton blooms ever, thanks to me a[nd] 11 shipmates and our work in the summer of 2012. IT JUST WORKS.

Beautiful. This fills my heart with joy. I have a real personal interest in this. Salmon fascinate me. That is my interest. But these pages I've read leave me with lingering questions. The Huffington link has an update, the chief councillor of the Massett tribe told Victoria Times colonist [sic] the tribe intends to stop ocean fertilization.

Why stop fertilizing? How are million more baby fish going to eat when they get there? Do the plankton persist? If not we are back to square one. All of those fish are not caught obviously, quadruple millions more salmon repopulating naturally and now those baby salmon will go out to sea and not be treated to a feast of newly vibrant ocean pastures, rather, they'll starve like before unless there is sufficient plankton leftover. I think the chief said that to get environmentalist/obstructionist off their backs. When the time comes should they need to, they now know how easily remedied the situation. Native Americans can get away with things regular citizens cannot.

No matter, he owns just short of half the corporation between them and he replaced himself with an associate. For show. To partially placate activists I suppose who require at least some personal destruction. But none of that matters. The effort a success.

I want to go salmon fishing. Just once. I shouldn't have mentioned that to a friend because now the gears are going and it is all I hear about, how are my plans coming? I didn't mean it to be a thing to plan out as a discrete endeavor, I meant I'd like to go fishing with my brother or with my sister, as they've done together and with no fascination for salmon as I have, while visiting either one up there in the corner as a natural thing to do together, not fly in an airplane just for one fish. Besides, freshwater trout fishing right here in Colorado is outstanding.
Posted by Chip Ahoy at 9:55 PM

Carbon is sequestered by the buildup of shells? Wow, that must take like forever.

Don't really know what sequestered means in this context but the must take like forever thing still stands.

Did you know the white sand at Cancun that is cool to the touch and covers each hair on your body with thousands of granules is all made by parrot fish gnawing on coral and pooping it out as fine white sand?

Now you do, if you dint.

And yes Chip A, I knew about the sand. Parrot fish are quite tasty, but they are better left to gnawing and pooping.

Chip Ahoy, there is plenty of salmon fishing opportunity for a person who wants to catch one in Washington and Oregon. If you want a big box to haul back and freeze for the year, go a three or four day trip out of British Columbia or Alaska.

Only loosely related to the topic... that guy looks almost entirely like my dad.

What happens to all the sulfate?

How about a nice bacterial bloom?

It's interesting (to me) that iron (II) sulfate is fed to the system as ferrous and winds up ferric.

I wrote of such word play here once.

chicken, also in aquarium books they talk about harmful nitrates from fish poo fowling but eventually turning to nitrites.

Or perhaps nitrites to nitrates I never could follow the logic.

So when they printed iron sulfate, I checked doubly to make sure because a nag that exists at my neck told me chicken might challenge iron sulfide and frankly I have no idea what any of that means. I always manage to omit a meaningful detail.

I'm glad it works out. I don't care about sequestration but Russ George does and I'm glad the possibility exists. I feel comfortable saying that because all the articles I looked at against it, some five or six, the con outnumber the pros vastly on this, none bothered elaborating the extraordinary success with salmon. They simply ignore it. Their interest is entirely climate change and no messing with environment in any way ever.

Enviro-nazis do not care about the environment, only about controlling other people.

Chip A, if you are serious about fishing, I can hook you up with a decent guide to get you on the water and get your salmon. I know a couple of good ones up there.

Here is a Rule 5 on the topic.

Hydrogen sulfide from sulfate-reducing bacteria also plays a role in the biogenic sulfide corrosion of concrete. It also occurs in sour crude oil.[2]

Some sulfate-reducing bacteria play a role in the anaerobic oxidation of methane:
CH4 + SO42– → HCO3– + HS– + H2O
An important fraction of the methane formed by methanogens below the seabed is oxidized by sulfate-reducing bacteria in the transition zone separating the methanogenesis from the sulfate reduction activity in the sediments. This process is also considered a major sink for sulfate in marine sediments.

Chick, where do you come down on the bacterial bloom? It seems that reducing methane production in the ocean sediment would be beneficial from the enviro standpoint.

Thank you bloggerlady. My sister lives in Oregon. She fishes salmon at will. Or when they're around or however that works.

My brother lives in northern California. He visited her and they two fished together and had a fine time.

I would like to do that. That is all. Just one fish.

Chick, where do you come down on the bacterial bloom? It seems that reducing methane production in the ocean sediment would be beneficial from the enviro standpoint.

Methane generated in the sea floor usually stays deep in the sea: While methane has negligible solubility in water, water does trap it in what are called methane clathrates which are like molecular cages.

There's a nice image at that link of "burning ice."

HS- is a source of H2S which is a cytotoxin for humans and mammals and I suppose some sea creatures. It works like carbon monoxide and cyanide. Humans may have developed a natural aversion to many sulfur compounds as a defense mechanism.

That there are such things as methane clathrates amazes me. Too cool, thanks.

I think it's a wash.